Hard to believe that we are deep into the second decade of the kindie era. Dan Zanes and Laurie Berkner helped kick off the first wave just prior to 9/11. Now I am gobsmacked by the wall of sound that envelopes the movement – from the Okee Dokee Brothers to Ziggy Marley to Brady Rymer and the Little Band That Could. 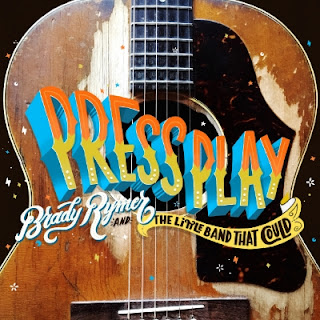 Whither the Little Band That Could. They've been an integral part of our children's music experience going back eight years. We purchased Brady's first CD and Ben remembers the first time we saw the group live (Jalopy, Kindiefest 2009) and I have the video to prove it (2,800+ views to date). Since then, I've lost track of all the shows but the annual Kidstock gigs in Port Washington are always a delight.

Hailing from Long Island, Brady Rymer and crew deliver a tightly-honed all-American sound. "It's a Beauty" is a country charmer about an antique fire truck being restored for (what else) a parade. "Me On The Map" would not feel out of place on any Bon Jovi CD from the past 15 years. "Chain Reaction" and its Stax sound (horns, harmonies) should get the most recalcitrant kids up and dancing. The poignant "Hold This Home Together" describes the efforts of new parents negotiating responsibilities for their new child:

You say a prayer and I'll knock on wood.
You be the bad guy and I'll be the good.
You take the night shift and I got the dawn.
You sew a stitch and I'll sing a song.

The Little Band That Could (Claudia Mussen, Liz Queler, Seth Farber, Jeremy Chatzky, and Larry Eagle with Dan Myers on saxophone) need no compliments but I'll dole some out anyway for good measure. Many ensembles go through a feeling-out process that is sometimes discernible in the mix. No problems here as the band charges through the message-intensive "I Surprised Myself" and "Switcheroo Day," which asks children to consider how the world looks from other perspectives. The band operates as one cohesive unit and everyone gets their chance in the spotlight to shine.

For a while we thought Brady might be putting his group on the back burner to concentrate on his side gig, playing bass for the Laurie Berkner Band. But the band continues to record and perform and hasn't missed a step. We've felt a strong personal connection to Brady since the release of his 2011 CD, LOVE ME FOR WHO I AM, which grew out of his experience performing for and working with kids with Autism, Asperger's Syndrome and related disorders. This is not an intermittent or transient choice that coincidentally comes and goes depending on the release date of a new CD. Brady works with these kids every year. NEWSDAY caught a recent performance in May.

Many high-functioning special needs children want to "pass" as typical. It's easier for them to get through the day if their idiosyncrasies don't draw undue attention. But Brady's music promotes kids being kids and celebrates their differences. Ironically, we've found that the best children's music is produced by artists who "pass" as typical; It doesn't matter if there are kids around, Brady Rymer and the Little Band That Could will get you rocking with PRESS PLAY.

Here is the video for the band's song, "One Day By the Riverside":