The Wrath of Marcie - The Go! Team
Friday Night - The Del Fuegos
Action Hero - Fountains Of Wayne
I Really Like You, Baby - ScribbleMonster
Why Is Dad So Mad? - The Board of Education
Owl and Pussycat - Heidi Swedberg
Rollerskate Banana Peel - Mo Phillips
Wake Up Baby! - Dan Zanes & Friends with Shine
Agree & Disagree - Mighty Buzznicks
I Like How It Feels - Enrique Iglesias feat. Pitbull
Posted by MrJeff2000 at 4:01 PM No comments:

When We First Met - Hellogoodbye
I Knew The Bride (When She Use To Rock And Roll) - Nick Lowe
Under a Cloud - Bangles
Say, Say, Oh Playmate - April Smith & The Great Picture
Toes - Mo Phillips
Born On the Bayou - Etta James
Hit Me With Your Best Shot / One Way or Another - Glee
Reminds Me Of You - LMFAO
Amish Paradise - Weird Al Yankovic
All The Young Dudes - Mott The Hoople
How Come You Never Go There - Feist
Posted by MrJeff2000 at 6:44 PM No comments:

Man Or Muppet - Jason Segel & Walter
Cruel To Be Kind - Nick Lowe
Hey, Josie! - The Hipwaders
Go Out and Play - The Plants
Been There, Done That - Eno/Cale
Clap Your Hands - The Time Outs
Our World - My Morning Jacket
Dream All Day - The Posies
Freebird - Arcwelder
Rock Around WIth Ollie Vee - Buddy Holly
My Favorite Things - Glee
Posted by MrJeff2000 at 3:56 PM No comments:

Dream - Blue Sky Riders
Shake Me Down - Cage the Elephant
Love Shack - Glee
Section 12 (Hold Me Now) - The Polyphonic Spree
Tommy Had a Super Towel - Todd McHatton
Laugh In Any Language - The Jimmies
Fire Of The Sun - Rocknoceros
Music Is the Medicine - Derek Miller
El Pussycat Ska - Roland Alphonso
Posted by MrJeff2000 at 4:12 PM No comments:

Building of the Road - Caroline Herring
Don't You Worry 'Bout A Thing - Stevie Wonder
I Want A Hippopotamus for Kwanzaa - The Jimmies
T.O.R.N.A.D.O. - The Go! Team
We Are Young - Glee
Pumped Up Kicks - Foster The People
Helicopter - M. Ward
Uncharted - Sara Bareilles
Big Black Snake - Dog On Fleas
It Had to Be You - Esquivel
Posted by MrJeff2000 at 4:04 PM No comments:

Storytelling is an artform. I learned this fairly early in life, when my father begrudgingly read us kids a bedtime tale and inflicted an age-inappropriate world-weariness into BABAR. 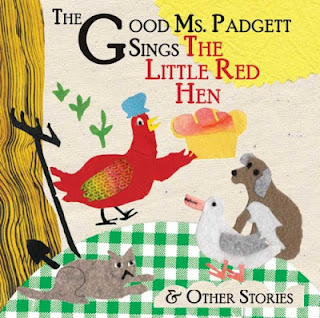 The four-track collection takes the simple tales of "The Little Red Hen," "Goldilocks," "Henny Penny," and "The Billy Goats Gruff," and relates them in simple, bright tones. Anna Padgett teaches music to preschoolers and definitely knows her audience. It takes a knowledgeable voice to twist the ending of "Little Red Hen" and remove the acid sting of the original tale.

Each short story has its message but the presentation removes all pretension of moral authority: These are children's tales with simple situations and easy to learn solutions. Ms. Padgett is delightfully engaging in her role of guitar-strumming storyteller. The music is gentle and lilting. We're putting aside the disc until Matt (15 months) is old enough to comprehend the basics. And I've pledged to not make the Berenstain Bears sound like Death of a Salesman when I read that to him as well.

The Good Ms. Padgett is available on iTunes, CD Baby, Bandcamp, and other independent retailers. This CD will be released on Tuesday, March 20.
Posted by MrJeff2000 at 8:01 AM No comments:

Jamberry - Ethan Rossiter & the Hartwells
Your Favorite Book - Recess Monkey
All The Young Dudes - Mott The Hoople
See the Seasons - The Rock Doves
Spoon - Cibo Matto
Harry Elefante - Rocknoceros
Someone Like You - Adele
You Might Think - Weezer
Sleepy Tigers - Her Space Holiday
Hi 5 Dance - Flannery Brothers
Posted by MrJeff2000 at 3:50 PM No comments:

This column is an expanded version of a letter I wrote to podcaster Mark Maron in response to a recent episode, where he discussed visiting his girlfriend's storage space.

It really is difficult to let go of things from the past.

My wife and I purchased a house in 1998, after living in a small apartment for four years.

Like many "grown and flown" children, I left a large collection (magazines, books, and comic books) in my old room and the attic of my mother's house.

To my chagrin, soon after my wife and I bought our house, my mother announced she was selling HER house and moving into a smaller space that was easier to maintain.

I felt some shame that my first emotions were annoyance and anger, both from the fact that now I was going to have to either relocate my collection or have it unceremoniously thrown out.

Many of the books were snatched at a pittance at a yard sale that she threw in the spring of 1999 before she moved. But I took the magazines and comic books and put them in my basement, where 18 storage boxes used a large chunk of valuable real estate.

Once we started a family, my wife planned to stop working and we needed to generate every scrap of extra income.

ebay had become a national sensation. After pricing some of the comics that did not have any emotional attachment, I started selling my collection. The first two years I made $16,000. Pretty good money for stuff that had been sitting in my mother's attic for at least a decade. 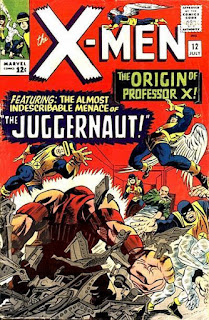 But the money was seductive. I sold a copy of X-MEN 12 for $20, which slightly aggravated me, since the price guide value for that condition was $45. Then I pulled the comic from the box and saw what I paid for it in 1979...$2.20. Pretty good markup from original purchase.

I got so involved in the actual process of selling that I became emotionally detached. I forgot why I had stored/hoarded many of these things for so many years.

It all came to a head when I sold some old MAD Magazines from the 1970s. People were paying good money and I had double copies of certain issues. But when those were quickly purchased, I went further and listed issues where I only had one original edition. Those were soon claimed as well.

That night, I opened my MAD storage box and pulled out an issue. All the memories from the magazine came rushing back: Late summer 1973. I'd just gotten my allowance. We went "back to school" shoe shopping at a little strip mall in New Jersey. While my mother dealt with my younger brothers, I walked across the parking lot to a stationery store and bought issue 161.

The magazine stayed with me when we moved to Long Island and survived 27 years between myself and three younger brothers. And now I was selling it - and all those memories - for $6.

I instantly regretted listing my MAD magazines. But now I had sold this one and was obligated to ship it. Which I did. 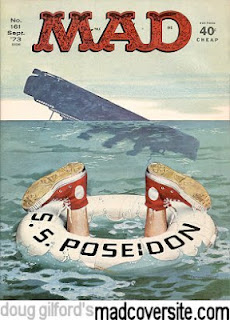 Then an amazing thing happened.

My sister in law worked for an insurance company. An elderly woman whom she helped settle a claim wanted to repay her. The old woman's apartment had caught on fire. She wanted to give my sister in law a collection of comic books that had belonged to her son, although many of them were smoke damaged or partially burned.

My sister in law asked if I wanted the collection. Since I was selling comic books on ebay, I picked them up. I asked the old woman what happened to her son. Why didn't he take the comics when he moved out? She explained that he suffered from depression and sadly, killed himself. These were his things, but now after the fire, she was cleaning out her apartment of its sad memories.

Her son had been four years older than me - had gone to the same college I attended. We even had the same major and belonged to some of the same clubs (newspaper, radio station). He had graduated, just before I got there, I never knew him. It cheered her up to know that the memories of him, that she had hoarded, were going to me.

I got home, put on gloves, and went through everything. In the end, I threw out more than I kept. From what I kept, I sold everything. Except for the copies of MAD magazine.

I got back my MAD magazines.

And I have kept my MAD magazines.

And I have the memories associated with those MAD magazines.

And oddly enough, I now have two other people's memories along with them.
Posted by MrJeff2000 at 10:40 AM No comments:

Classical is a hard (musical) nut to crack.

Maestro Classics seeks to ease that burden for music-conscientious adults (like us). Established by Bonnie and Stephen Simon, Maestro Classics uses the London Philharmonic Orchestra to provide child-friendly, fun-filled stories and musical explanations. Bonnie is the former executive director of the Washington Chamber Symphony at the Kennedy Center in Washington, DC. Stephen produced 25 years worth of beautiful performances as the music director of the same organization and is a prominent symphony conductor. 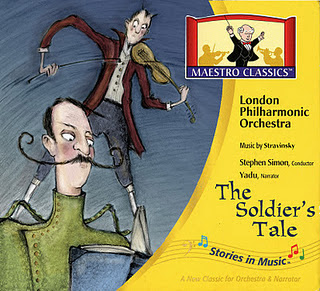 For their latest entry, Maestro Classics takes on The Soldier's Tale by Igor Stravinsky (story by C.F. Ramuz). The 36-minute main track can be played while kids follow along with the illustrated booklet with artwork by Birgitta Sif.

For the video/iPad generation, these CDs offer education on many different levels. The Simons take Stravinsky's story of Joseph, the young soldier, and bring it to life with all the passion and artistry of the London Symphony Orchestra. The tale gets boiled down with a modern tweak and a techno beat in "The Amazing Baz Dance Remix" which follows the performance.

The CD concludes with separate tracks that discuss the composer (Stravinsky) and his musical composition. Young aspiring composers will be fascinated to learn how no matter how the world changes, some things remain the same in the realm of music.

Maestro Classics is not reserved for composers from bygone days. While Prokofiev's "Peter and the Wolf" seems an obvious companion piece, they also cover Virginia Lee Burton’s classic American storybook "Mike Mulligan and His Steam Shovel" and Ernst Lawrence Thayer's "Casey at the Bat."

With Maestro Classics, parents can start investing in a rounded musical education that doesn't start with Adele and end with Ziggy Marley.
Posted by MrJeff2000 at 9:13 AM No comments:

So You Want To Be A Rock 'N' Roll Star - The Byrds
Our World - My Morning Jacket
Section 12 (Hold Me Now) - The Polyphonic Spree
We Are Young (ft. Janelle Monae) - fun.
Peace And Love - Fountains Of Wayne
Another Tattoo - Weird Al Yankovic
Black or White - Glee
For Those About To Walk (We Salute You) - Daddy A Go Go
Open My Eyes - Bangles
Posted by MrJeff2000 at 4:01 PM No comments:

Nogturne in C Minor - The Jimmies
I Want You Back - Glee
Hey, Josie! - The Hipwaders
Bluebird > Redbird, Redbird > Reef - The Deedle Deedle Dees
Thank You - Dan Zanes & Friends
Reminds Me Of You - LMFAO
Donuts - Jeff Forrest
The Fox - Waco Brothers
You Yes You - Tune-Yards
Born to Shake - Anna Oxygen
Posted by MrJeff2000 at 3:48 PM No comments:

Turning Tables - Adele
So You Want To Be A Rock 'N' Roll Star - The Byrds
Darwin - Artichoke
Everybody's Gonna Be Happy - Dan Zanes & Friends with Joan Osborne
I Like How It Feels - Enrique Iglesias feat. Pitbull
At the Bottom of the Sea - The Thermals
Dream All Day - The Posies
Time Out To Rock - The Not-Its!
Wild Thing - Troggs
Posted by MrJeff2000 at 4:23 PM No comments: