The self-named rustic duo the Okee-Dokee Brothers bring their high altitude (from Colorado) ecological euphoria to Symphony Space on Saturday, January 5. Joe Mailander and Justin Lansing are touring in support of their latest CD, WINTERLAND. 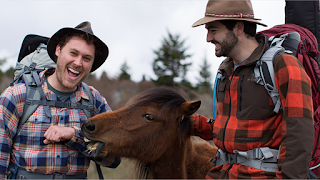 WINTERLAND features 16 original compositions themed loosely around being home for the holidays with the family. Their return as part of the Just Kidding Club series has an 11 AM start time in the Peter Jay Sharp Theater ($17 tickets for non-members).

As I wrote in my review of WINTERLAND way back in November, the album "demonstrates how to sing educational tunes about the great outdoors and nature without overwhelming the fun and singalong quality of the material." They will also perform songs from the rest of their catalog, including the Grammy-award winning CAN YOU CANOE?

Joe and Justin have dedicated WINTERLAND to their beloved and endangered winters, which are warming fast as a result of climate change. To help ensure their fans can enjoy a lifetime of snowy winter exploration, the Okee Dokees are donating 10% of all WINTERLAND CD sales to Askov Finlayson’s Keep the North Cold initiative, which supports leading-edge climate solutions in the North and across the country. Read more about their important mission here.

You can purchase tickets for the Okee Dokee Brothers' show at Symphony Space on Saturday, January 5, 2019 at 11 am by going here.

Here is the video for their song, "Blankets of Snow":

Gustafer Yellowgold Books a New Trip From the Sun

Is there life elsewhere in the galaxy? From the perspective of somebody under four feet tall, the answer might be "yes, on the sun." That makes complete illogical sense if they are familiar with Gustafer Yellowgold, the creation of New York-based musician/performer/illustrator Morgan Taylor.

Created wayback in 2004 in a fit of whimsy, the little "sunling" fell to Earth and began having adventures (with his pet eel, among others) in a series of enchanting multimedia shows (one of which we witnessed at the Museum of the Moving Image in 2007). What was not to like about fanciful children's music accompanied by lyrics-subtitled videos? Ben (then 6) was singing "I'm From the Sun" pretty much the entire drive home. 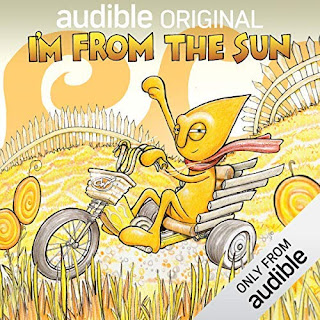 From there, Morgan produced a series of CD/DVD releases, a 2017 Grammy-nominated CD (BRIGHTER SIDE), and now an Audible exclusive children's audiobook, an origin tale entitled "I'M FROM THE SUN." The nearly-four-hour story also includes all the songs (13 brand new ones and three reprises, produced by Wilco's Pat Sansone), which serves as a separate entity altogether.

Judging the music by itself, Gustafer Yellowgold has remained a perennial favorite of Ben's (it's perfectly coincidental that Gustafer's older brother is also named Ben). Despite the age gap between Ben and his younger brother, the kids are both looking forward to bonding over Morgan's creation at his February 2 performance at Symphony Space (tickets on sale here). The tunes on I'M FROM THE SUN include the title track as well as the War-soundalike "Low Rider" inspired "Hot Malt Eagle," the trippy "Ellen Lemon," and the anthemic closer "Feel Your Shine."

It took my younger son Matt and I quite a while to wade through I'M FROM THE SUN. Thirteen chapters (at one chapter a night, on average) broken up over several weeks, even at 1.25x speed, took some time. The story is a prequel to the "Gustafer on Earth" material, centering on the Yellowgold family's tenuous finances running a raisin carvery, Gustafer's secret dislike of raisins, and a climactic race as part of the Tiger Face holiday festival. Along the way, Morgan delivers messages about finding your own voice, bullying, and personal responsibility.

To this point in time, Gustafer Yellowgold has been a one-man operation. While that works well in a stage setting, it was initially challenging to separate the distinct voices of the many characters – all voiced by Morgan. But the story is engaging, the puns are tolerable, and we even listened to the final race and aftermath in one setting, at Matt's request. So I'M FROM THE SUN clearly hit its demographic in that regard.

Morgan gives himself at "out," as the audiobook ends with a cliffhanger that will segue into another DVD/CD or a second audiobook. Either way, Gustafer Yellowgold lives to see another day, another incarnation, and to jump on more cakes (it would take too long to explain). The sun has yet to set on the Yellowgold empire and youthful audiences should be prepared for more post-ecliptic epics.

I'M FROM THE SUN is available exclusively from Audible. You can get tickets for The Gustafer Yellowgold Show at Symphony Space on Saturday, February 2 from Symphony Space.

Here is the video for "Hot Malt Eagle" from the new Gustafer Yellowgold audiobook, I'M FROM THE SUN:

Peruvian-born musician Flor Bromley first saw a-ha's influential music video for their song, "Take On Me" when it hit MTV in 1985. In the back of her mind, Flor knew that someday, she would pay it forward how much the animation technique meant to her. That day has come, with the release of her video "Kitty," from her bilingual children's music album, CHIQUI BOOM BOOM.

The video finds Flor in a diner, where she is drawn into an animated adventure with a friendly kitten. Much like the a-ha song that inspired it, "Kitty" cuts back and forth from live action to hand-drawn characters. There is even a happy ending – although not to the degree that a-ha ripped off from the seminal 1980 Ken Russell movie Altered States. "Kitty" was directed by Jesse Judy from Genesius Studios and animated by Tommy Cha.

You can purchase CHIQUI BOOM BOOM from Apple Music or Amazon.

Here is the video for "Kitty":

Have You Ever Been Real – Dean Jones
Window – Gustafer Yellowgold
Peace Be To All – Brady Rymer and the Little Band That Could
Tricycle – Danny Weinkauf
I've Been Everywhere In New York City – Hopalong Andrew
Handle With Care  – Like Father Like Son
Higher Higher  – Justin Timberlake
Posted by MrJeff2000 at 5:41 PM No comments:

Have A Heaping Holiday Helping of Matt Heaton

Boston's Matt Heaton is a throwback to the 1970s style of children's music – a singer-songwriter backed (on his recordings) by a bevy of total professionals. His new winter/holiday CD, SNOW DAY! features a lot of rockabilly guitar but also a touch of flutes. 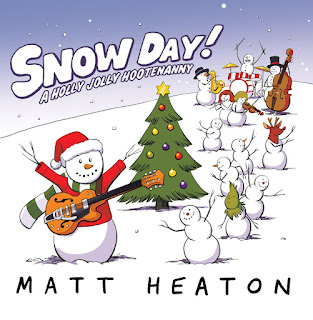 I've lost count of the number of songs titled "Snow Day," but Matt attempts to put his own stamp on the burgeoning sub-genre. Other than the title track, the rest of the CD covers the festive gamut of staying up for Santa ("The Sneak") to a twangy "Can't Judge a Gift" that's only missing a cut-in ad break from a local sponsor.

Nostalgia continues to evolve, however, as witnessed in "Christmas Movies," where Matt reminisces how in our pre-TiVo and Netflix days, you had to peruse the TV schedule to determine when and where your favorite specials were airing in REAL TIME. "Rudolph the Red-Nosed Reindeer" gets a bossa nova tune-up and "You're A Mean One, Mr. Grinch" goes surfing with a Dick Dale picking style. And Matt's "Hanukkah O Hannukah" has never made the token ethnic tune sound so welcoming. "Winter Wonderland" needs no introduction, and in Matt's version, it's merely a laid-back instrumental.

You either have an affinity for holiday music or you don't. Matt uses SNOW DAY as an opportunity to deliver some seasonal chestnuts with flavor and passion.

Here's the terribly unseasonal video for "Don't Drink the Water":

Me And You – Caspar Babypants
Finally – Franz Ferdinand
Stars – Ants Ants Ants
Holiday Jam – Brady Rymer and the Little Band That Could
What Will I Be? – The Not-Its!
Teddy Bear – Danny Weinkauf
Feels Like Summer  – Weezer
Posted by MrJeff2000 at 4:14 PM No comments:

The best recent joke I've heard about the holiday season is: Anyone who says they don't hate Christmas music has never worked retail. 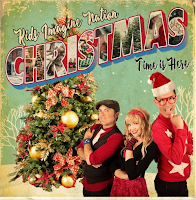 Having completely spoiled the mood, I'm now going to review a children's music release devoted to that topic. Kids Imagine Nation is the high energy trio that make
the Wiggles look sleepy (and not just original Wiggle Jeff). CHRISTMAS TIME IS HERE is their aptly-named third CD and it's chock full of, well, power pop anthems.

"Up On the Housetop" strips the paint off the old standard and rebuilds it as a full-throttled raver. "Frosty the Snowman" gets an EDM dance beat and "Go frosty go" refrains. "Jingle Bells" sounds like it came right from the Thanksgiving Day parade and "Deck the Halls" features singing dogs (and cats). KIN's closing selection of "We Wish You A Merry Christmas" is not to be played for toddler at bedtime. In fact, I'd recommend it as a wake-up song or something for mom to play as she cuts through traffic to get the kids to school on a wintry day.

CHRISTMAS TIME IS HERE is available from Amazon and Apple Music.

You can find Kids Imagine Nation on their YouTube channel as well. Here's a recent episode featuring "Santa's Workshop":

How Lucky We Are – Justin Roberts
Sea Of Stars – Dan Zanes
Lazy Boy – Franz Ferdinand
What's Done is Done – Jack White
Anything For You My Love – Caspar Babypants
Humans Are Still Evolving – Dean Jones
Inside I Shine – Danny Weinkauf
Posted by MrJeff2000 at 4:48 PM No comments:

Can You Sing? – Dan Zanes
Always Ascending – Franz Ferdinand
One Day By The Riverside – Brady Rymer & The Little Band That Could
Watch Petunia Dance – Caspar Babypants
People Watching – Dean Jones
Over and Under – Danny Weinkauf
Posted by MrJeff2000 at 4:15 PM No comments:

Johnette Downing has gone cajun. For her 11th children's music CD, SWAMP ROMP (coming next February), Johnette spent five years in writing the material for the CD, the first recorded with her husband/producer Scott Billington, in New Orleans.

The first video from SWAMP ROMP comes with animation from the picture book of the same name, "How to Dress a Po'Boy":