Dad Is Takin' a Nap – Keith Munslow
Snaggletooth – Dean Jones
I Dreamed I Could Fly – Eric Herman And The Invisible Band
It Suits You – Gustafer Yellowgold
Maps – Maroon 5
Music is Everywhere – Mista Cookie Jar & the Chocolate Chips
Long White Beard – They Might Be Giants Feat. Robin Goldwasser
On Air – The Pop Ups
Posted by MrJeff2000 at 4:49 PM No comments:

Mayim – Joanie Leeds & The Nightlights
Hello Goodbye – Caspar Babypants
That Way  – Chibi Kodama
I'm Not the Sharpest Tool – Dean Jones
The Tale Of The Sun And The Moon – Eric Herman And The Invisible Band
Elephants – They Might Be Giants Feat. Danny Weinkauf
Yawn – Gustafer Yellowgold

Amnesia – 5 Seconds of Summer
My Heart Is Open – Maroon 5 Feat. Gwen Stefani
Hamsterdam – Ratboy Jr.
Backyard – Riff Rockit
Then The Kids Took Over – They Might Be Giants
Rooms – Tim Kubart

No really, they do. And in support of her recent two-CD collection, LAURIE BERKNER'S FAVORITE CLASSIC KIDS' SONGS, she has released a new video of the holiday standard, "This Little Light of Mine." There are 51 songs in the compilation. Yes, you read that right.

Berkner will not be releasing 51 separate videos. That would be silly. And "This Little Light" is certainly not a silly song. So take a gander and relax with your families through the holiday season. I'll be take with some new children's music reviews after the New Year.

Remember holiday variety specials? Clips from the abominable STAR WARS Christmas special are rife on the Internet right now, but I refuse to provide more fodder. Instead, direct your attention to the Pop-Ups. They've been releasing kids' music videos for some time. Now, as part of their deal with Amazon Prime, they have unleashed a 30-minute "Great Pretenders' Club Special" just in time for the holidays.

You can view individual videos from the duo at their YouTube channel. But the special (part of their Great Pretenders' Kids Club) is an Amazon Music exclusive. It will move to the YouTube channel in the future, but you need a Prime membership to see it right away.

Sign up your kids for the club and earn badges. When they earn all the badges, they can get the biggest badge of them all. Next year, The Pop Ups and Amazon will release more videos to accompany each song on the album. And if you're not a Prime member, you can download the entire MP3 album for $7.99! See the band at Symphony Space on Saturday, January 9.

Here's the video for "Pretend We Forgot":

Labels: Alastair Moock, Andrew and Polly, Andy Z, Brady Rymer, The Bazillions, They Might Be Giants

All In A Day – Alastair Moock & Friends
All Around the Kitchen – Andy Z
Bad Haircut – The Bazillions
Tomorrow's People  – Brady Rymer & The Little Band That Could
River Lea  – Adele
20 More Dollars – Chibi Kodama
Posted by MrJeff2000 at 4:14 PM No comments:

Secret Fox– Gustafer Yellowgold
Dad Is Takin' a Nap– Keith Munslow
Uh Huh– Dean Jones
Mama Don't Allow– In The Nick Of Time
Water Under The Bridge – Adele
Coming Back For You– Maroon 5
Posted by MrJeff2000 at 4:51 PM No comments:

Shake a Friend's Hand – Andy Z
Ghostbusters – Andrew & Polly
Sons and Daughters – The Bazillions
Gettin' My Ya Ya's Out – Brady Rymer & The Little Band That Could
One After 909  – Caspar Babypants
San Francisco – 5 Seconds Of Summer
Posted by MrJeff2000 at 2:57 PM No comments: 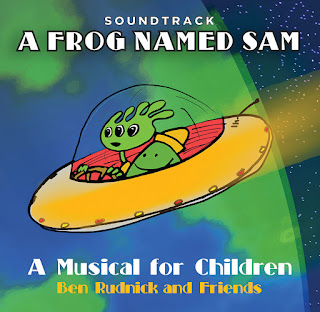 Carry a Tune – Recess Monkey
Turned Out – Paul McCartney
Backyard  – Riff Rockit
DJ All Day – Secret Agent 23 Skidoo
Dancing in the Kitchen – Tim Kubart
Outside of December – The LeeVees and Matisyahu
Hey Everybody! – 5 Seconds Of Summer
Posted by MrJeff2000 at 5:01 PM No comments:

Sing Along With Raffi's Owl Singalong

It's hard to envision a world without Raffi.

Even people without kids – we in the kindie world refer to them as "civilians" – have an awareness of the man who almost single-handedly spearheaded this movement. I don't want to belabor the point, but yell "Raffi!" in a crowded movie theater and someone will know who you're talking about. 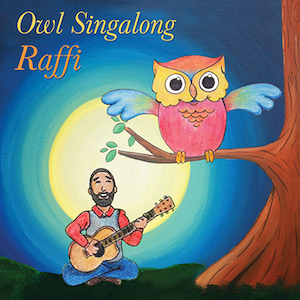 It's thus mind-bending to realize that such an influential figure, a seminal individual, a statesman for children's music (okay, he's no Abraham Lincoln) could take a 12-year break from his best-known industry. That's almost twice the average age of his preferred listener. An acceptable dog's lifetime. But in 2014, Raffi returned to the scene and toured to support his CD, LOVE BUG. And he's back to welcome 2016 with OWL SINGALONG. It's not like we should be surprised that Raffi is recording new music. It's just that after an extended absence, we didn't expect it. And then expect more, so soon.

Since his debut in the 1970s, Raffi has remained a dependable acoustic source of warm, hummable children's tunes. OWL SINGALONG contains reworkings of "More We Sing Together," "Dog on the Bus," and "The Lion Pokey." Pete Seeger's "Abiyoyo" wraps up the collection. In between, there's shapes ("You May Be A Triangle") and personal achievement ("I’m Not Small"). And for you French Canadiens, "Dans La Forêt Lointaine" (In the Distant Forest) harkens back to Raffi's days in Toronto and Montreal coffeehouses.

When Raffi played Manhattan's Town Hall in 2013, it fell on the same day as the family festival of Kidstock. Befuddled kindie pundits tore themselves from BAM to make an almost-obligatory pilgrimage. The next day, I anticipated the set list and lamented being unable to triangulate my day (where I was tasked with wrangling both kids). And this from a man who spent nary a moment listening to Raffi (my entire family had aged out, so no Beluga grads in my house) during his heyday. My initial exposure was a concert DVD at a friend's family's New Years Day party to entertain their kids. "Raffi?" I inquired. "He's a better choice that Elmo," I was told. How little we knew. If only I had then the knowledge base I have now.

The good news is, if you liked Raffi when you were a kid, you'll be excited to introduce your kids to that Raffi. Sure, there's a focus on ecology ("Green Dream" and "Garden Song"), but that's to be expected from a man who founded an organization dedicated to honoring and respecting the Earth and Children. Oh, and there's no bad news in that respect.

For many performers, children's music stays a hobby, a sideline, something to fill some family time until their own kids are grown. Rare are the artists who persevere and dig deeper into the darker corners of childhood to deliver more than just wistful homilies. Under the classification of children's music, Raffi remains almost sui generis, a genre unto himself. Long may he strum.

OWL SINGALONG is available for pre-order and drops January 15, 2016 from Amazon and iTunes.

Here is the video for "Owl Singalong":

It's that most stuffing-stocked time of the year.

Here are a couple of new videos, one holiday related and the other, not so much.

Ben Rudnick and Friends are releasing A FROG NAMED SAM: A MUSICAL FOR CHILDREN in January. Here is the debut video, "The Adventure Song," featuring animation by Matt Litvinov.