Good Morning Tucson - Jonathan Coulton
Sing Your Own Song - John Wesley Harding
Let Your Hair Hang Down - They Might Be Giants
The Happy Vegan Thanksgiving Song - Todd McHatton
Turning Tables - Adele
Richie and Ruben - Fountains of Wayne
Worms - Dog On Fleas
I Kissed A Girl - Glee
Get Me Out Of Here - Bill Harley
Set Me On Fire - Spirits and the Melchizedek Children
Posted by MrJeff2000 at 3:56 PM No comments:

The Cave - Mumford and Sons
The Happy Whistler - Don Robertson
See the Seasons - The Rock Doves
Worms - Ratboy Jr.
Walking Wires - Radical Dads
River of Blood - The Deedle Deedle Dees
Laugh In Any Language - The Jimmies
A Road Song - Fountains Of Wayne
Tommy Got In Trouble - The Bazillions
Someone Like You - Adele
Posted by MrJeff2000 at 3:53 PM No comments:

Christmas Eve - The Jimmies
Animal - Neon Trees
You Might Think - Weezer
Go Out and Play - The Plants
New Shoes - Paolo Nutini
Henry (Hudson), How Ya Gonna Find a Way? - The Deedle Deedle Dees
Bubble Test - Daniel Hales & the Frost Heaves
Hit Me With Your Best Shot / One Way or Another - Glee
Someone Like You - Adele
Say, Say, Oh Playmate - April Smith & The Great Picture
Posted by MrJeff2000 at 4:03 PM No comments:

Chanukah is back! It actually never went away. The year 2011 is the (Jewish) year 5572. That's a lot of candles and kugel. Not to mention dreidel-spinning. And speaking of festive jewish holidays, you can't get any happier than Chanukah, no matter how you spell it.

The Mama Doni Band celebrated its favorite celebratory event in 2009 with an entire children's CD, CHANUKAH FEVER, (subtitled, "13 Macca-beats for the Whole Family!"). The CD is a primer to the holiday, reminding parents and relatives of what's behind all the hoopla and mishigas. 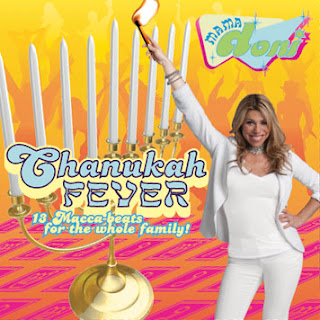 From a 2007 start as the music teacher for her children's preschool, Doni has expanded into a full-fledged frontperson for a traveling band of Jewish minstrels, performing at JCCs and temples from coast to coast, including Manhattan's 92nd Street Y. I stumbled across the band on a clip from E! Television's "The Soup," technically a credit to boast about - even if the band is overshadowed by the antics of the hosts of the morning show program where they were performing.

Mama Doni strives for authenticity with its message. You get the hebrew and the meaning to the family and community. The band is committed to preserving Jewish (not to mention Yiddish) spirit in a world filled with 24-hour Christmas music marathons. Not every jewish children's act is sponsored by Streit's Matzoh. Surely a kosher stamp of approval.

Oh yes, the CD. You get the funky title track, the vaudevillian-esque "Honey, This Ain't Money" (an ode to Chanukah gelt), and clever tracks breaking down dreidels, the legend of Judah Maccabee, menorahs, and latkes. Aah, potato pancakes. One-year-old Matt is demanding "real" food now and loves to share latkes with his older brother. It'll take another year before he can polish off an entire pancake by himself, though.

Mixing culture with children's music is a tricky deal. It's frustrating that Christmas music coopts the "holiday" theme every December. And even when Adam Sandler's "Hanukah Song" gets mixed in on a pop station, it's seen as an ethnic curio instead of just another holiday standard.

The optimists inside me hopes that CHANUKAH FEVER helps stem the tide caused by the annual avalanche of Christmas CDs from Justin Bieber and Mariah Carey, among others. Let's light a festive candle, ladle on the apple sauce (my choice) with our potato pancakes, and hear some happy hebrew tunes from Mama Doni and her band.
Posted by MrJeff2000 at 8:00 AM No comments:

Not Too Young for a Song - Dan Bern
You're Not The Bossa Nova Me - Daddy A Go-Go
White And Nerdy - Weird Al Yankovic
A Good Good Time - Nikolai Moderbacher
Making Promises - Indigo Girls
Someone Like You - Adele
Someone's Gonna Break Your Heart - Fountains Of Wayne
Honest Face - Liam Finn + Eliza Jane
Somewhere - Glee
Type A Prayer - Alchemystics
Posted by MrJeff2000 at 3:48 PM No comments:

Get Together - Youngbloods
Shake Me Down - Cage the Elephant
Something's Coming - Glee
A Song for Abigail Adams - The Deedle Deedle Dees
Great To Be A Kid - The Not-Its!
Cosmology, Your Futon, and You - The Amoeba People
You've Got A Friend - Me First & the Gimmie Gimmies
I Want a Hippopotamus for Christmas - The Jimmies
The Fox - Waco Brothers
Jamberry - Ethan Rossiter & the Hartwells
Shoo Fly - Don't Bother Me - Sweet Honey In the Rock
Posted by MrJeff2000 at 2:57 PM No comments:

Why - Steve Weeks
When We First Met - Hellogoodbye
Your Room's A Mess - Rock Daddy Rock
Rocket Ship - Laura Doherty
D.A.N.C.E. - Justice
I Really Like You, Baby - ScribbleMonster
Because I Said So - Keller Williams
Burn It To The Ground - Nickelback
One Hand, One Heart - Glee
Grandmom's House - Recess Monkey
Hi 5 Dance - Flannery Brothers
Posted by MrJeff2000 at 4:17 PM No comments:

It Will Rain - Bruno Mars
Song of the Passaic - Fountains of Wayne
The Only Exception - Paramore
Safety Dance - Men Without Hats
They Lady And The Tiger - They Might Be Giants
Hurts Like Heaven - Coldplay
Goodbye, Bird - The Fastbacks
Twistification - Dog on Fleas
Saturday Night - Bay City Rollers
Posted by MrJeff2000 at 2:17 PM No comments:

Six Months in a Leaky Boat - Split Enz
Promise of a New Day - Paula Abdul
You're Pitiful - Weird Al Yankovic
Where Do The Children Play - Horace Andy
All The Young Dudes - Mott The Hoople
Change My Luck - The Not-Its!
She Walks In So Many Ways - The Jayhawks
You Can Stop The Beat - Glee
I've Got a Brother - Nick Cope
Onyonghasayo - Skankin' Pickle
Posted by MrJeff2000 at 3:55 PM No comments:

Last Friday Night - Glee
Sliver - Nirvana
Dream All Day - The Posies
Reminds Me Of You - LMFAO
Baby Brother - Detective Kalita
Sacagawea - The Deedle Deedle Dees
Stalk of Wheat - They Might Be Giants
Sunglasses - Recess Monkey
Someone Like You - Adele
Ruling Me - Weezer
Octopus - Artichoke
Posted by MrJeff2000 at 4:05 PM No comments:

Muriel's Hoof - Soft Boys
Princess Of China - Coldplay Feat. Rihanna
Horse and Buggy - Kindercastle
All The Best - R.E.M.
Jen - Stacey Peasley
Don't Download This Song - Weird Al Yankovic
You Might Think - Weezer
I Want A Hippopotamus for Hanukkah - The Jimmies
Vacation - The Not-Its!
Posted by MrJeff2000 at 5:55 PM No comments: