The Thank You Song - Uncle Rock
My Darling Clementine - The Submarines
On The Wings Of A Nightingale - The Everly Brothers
Nonagon - They Might Be Giants
Dance This Mess Around - The B-52
I Like Being A Kid - Stephen DiRaffaele
Are You Gonna Eat That? - Keith Munslow
One Week - Barenaked Ladies
Midtown Greenway - Bunny Clogs
Rattle My Bones - The Suburbs
Posted by MrJeff2000 at 8:20 PM No comments:

The Greatest Love of All - Whitney Houston
The Way I Am - Ingrid Michaelson
Shuffle Off To Buffalo - The New Broadway Cast Recording
Tijuana Taxi - Herb Alpert & the Tijuana Brass
Driver Education - Indigo Girls
Wind It Up - Gwen Stefani
That's How We Make A Sandwich - Duplex
400 Cupcakes - Hullabaloo
I'm Only Happy When It Rains - Garbage
Troublemaker - Weezer
Posted by MrJeff2000 at 6:34 PM No comments:

Percy on Pluto - The Nields
What Are You Like - Indigo Girls
Starman - Golden Smog
Spork - Keith Munslow
My Angry Voice - The Sippy Cups
It's Sunny When You Share - Mighty Weaklings
Rock Lobster - The B-52s
Super - Pencilhead and the Playground Punks
Posted by MrJeff2000 at 5:52 PM No comments:

It Makes You Feel Good - Renee & Jeremy
Beep Beep - The Playmates
Don't Dream It's Over - Crowded House
Photograph - Ringo Starr
Sara Bellum - Roger Day
The World Is Not Enough - Garbage
Be Part of the Band - The Verve Pipe
So So Happy - Debbie and Friends
Science Is Real - They Might Be Giants
Posted by MrJeff2000 at 3:53 PM 1 comment:

Renee & Jeremy Wake You Up, Mellow

When I listened to the first release ("It's A Big World") from Renee & Jeremy, I thought, "Mellow West Coast music for laidback California kids." That initial perception continued when I heard some tracks ("Wishing Well" and "BFF") from their second album, "C'Mon." 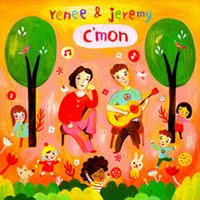 However, the duo has gone uptempo on their new release. Ben sung along to the catchy melody and hook of "Watch Where You're Goin'" for days on end. And as I remarked, "It's practically a rocker for Renee & Jeremy."

Some of the songs tend to skew a little young. "Right Now" could be the anthem for parents of impatient children: "I know you want it, but you can't have it, right now." And "Mama Papa Love," about familial affection, drips syrup. But at least they're crafted to not sound preachy. They're just earnest, as is "It Makes You Feel Good."

Mostly though, Renee & Jeremy are about projecting positive messages and promoting harmony through their music. "C'Mon" contains the refrain "C'mon, c'mon, c'mon, let the wonder in," which pretty much sums up the theme of the CD - live, enjoy the world, share music, and have fun in the process.
Posted by MrJeff2000 at 8:40 AM No comments:

Times Like These - Jack Johnson
Brush Brush Brush - Of Montreal
Let's Not Fight (Feast of Lights) - They Might Be Giants
She Blinded Me With Science - Thomas Dolby
Joy To The World - Three Dog Night
Tripping Down the Freeway - Weezer
Planet Claire - The B-52's
Bleeding Love - Leona Lewis
New River Train - Cathy & Marcy With Christylez Bacon
Applesauce vs. Sour Cream - The LeeVees
Posted by MrJeff2000 at 3:13 PM No comments:

What Is An Animal? - Marais & Miranda
I Won't Grow Up - Dan Zanes & Friends
It's The Beatbox - Cathy & Marcy With Christylez Bacon
I Feel Like Going Home - Yo La Tengo
Have You Seen My Chicken? - Sweetback Sisters
Roncando - Dean Jones
Dance This Mess Around - The B-52s
Something So Strong - Crowded House
In The Mall - Weezer
Oh My My - Ringo Starr
Roy G. Biv - They Might Be Giants
Posted by MrJeff2000 at 4:56 PM No comments:

Zoom A Little Zoom - Tom Glazer & Dottie Evans
I Have a Little Dreidel - Yosi & the Superdads
I Don't Need Anything But You - Dan Zanes & Friends
Meet Me Halfway - The Black Eyed Peas
On The Wings Of A Nightingale - The Everly Brothers
Beanbag Chair - Yo La Tengo
Private Idaho - The B-52's
Seven is the New Fourteen - Sippy Cups
My Brother The Ape - They Might Be Giants
Let It All Hang Out - Weezer
Dr. Wiggle - Recess Monkey
Posted by MrJeff2000 at 3:46 PM No comments:

My letter to Newsday:

That's right. Queens, the borough. Remember me? Newsday used to have plenty of coverage of Queens until the board ordered staff cutbacks to improve the paper's financial bottom line.

We're the people who are good enough to BUY Newsday but not to be publicized, unless there is some sort of horrific newsworthy crime. Crime sells!

Anyway, this letter is in response to your December 13 article on "Best LI Holiday Lights." You mean to tell me that if the children in Queens want to see decorative holiday lights, they need to travel out to Massapequa? They can't just drive to Bayside or Forest Hills? Oh right. I forgot. Silly borough.

I'll let homeowners know that in order for Newsday to photograph their decorative lighting displays next winter, they shouldn't bother. Unless there's a grisly crime scene in the foreground that makes it newsworthy.

The Girl From Ipanema - Astrud Gilberto
Goyim Friends - The LeeVees
Come as You Are - Peter Wolf
Raise the Brain - Miz B
That Thing You Do! - The Wonders
My Best Friend - Weezer
I Think I got You Beat - Shrek Soundtrack
History Never Repeats - Split Enz
E Eats Everything - They Might Be Giants
Can't Stop (Don't Mess With the Dragon) - Ozomantli
Casper The Friendly Ghost theme
Posted by MrJeff2000 at 4:47 PM No comments:

The Face Of The Earth Is Changing - Marais & Miranda
Wings of An Eagle - Ziggy Marley
All My Toys Are Broken - AudraRox
I-C-E C-R-E-A-M - Telephone Company
Candy Cane Christmas - Darius Rucker
Beep Beep - The Playmates
Gelt Melts - The LeeVees
Big Wide Wonderful World - Chris Isaak
This Is Our Story - Shrek the Musical
Apple - Me 3
Rag & Bone - The White Stripes
Posted by MrJeff2000 at 3:50 PM No comments:

We Are Going To Be Friends - White Stripes
Don't Give Up - Peter Gabriel & Kate Bush
1907 - Monty Harper
Where Do They Make Balloons? - They Might Be Giants
Down Under - Men At Work
Dig Up the Roots - Mr. Leebot
My Best Friend - Weezer
Right Now - Mocean Worker
What's New Pussycat? - Tom Jones
Wolfgang's Big Night Out - Brian Setzer Orchestra
East to the West - Michael Franti and Spearhead
Posted by MrJeff2000 at 3:54 PM No comments: