Not Too Young for a Song – Randy Kaplan
Anybody Got A Watch? – The Dirty Sock Funtime Band
My My My – Mista Cookie Jar & The Chocolate Chips
Handy – Weird Al Yankovic
No, No, No – The Little Rockers Band
DJ All Day – Secret Agent 23 Skidoo
Big Green Party Machine – David Heatley
Nose In A Book – The Not-Its!
The World Is Ours – David Correy
Posted by MrJeff2000 at 4:20 PM No comments:

Immersing yourself in the kindie music culture is a bit like playing Alice in Wonderland. Every time you go one level deeper, you discover new concepts, interesting hotbeds, and motivated performers.

We've enjoyed the Hipwaders for many years, thanks to Spare the Rock and then through review copies of their material. Based in the San Francisco bay area, the trio has not performed on the East Coast in quite a while. Thus, our enjoyment has been strictly of the music itself. The band has existed for a decade and has a dedicated following. 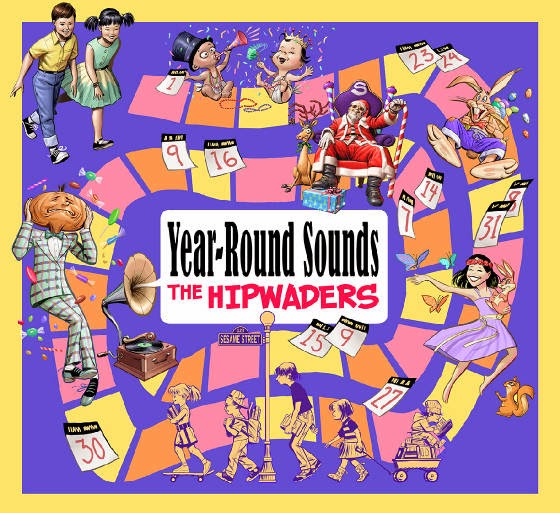 Some hardships and changes in the lineup have slowed their output, but Hipwaders bandleader Tito Uquillas has stayed the course. The group's sixth CD, YEAR-ROUND SOUNDS, marks their 10th anniversary with a bittersweet farewell to bassist DJ Kinville and a rousing welcome to replacement Smilin' Hal Imbrie.

Hailed by Time Out New York as "one of the 25 best bands for kids," the Hipwaders latest is all over the place, by design. "(Here Comes) Peter Cottontail" rubs furry shoulders with "Here Comes Santa Claus." We were nowhere near ready to toilet train our youngest when "You Gotta Hold It" arrived as a single. Now we're completing the process and we witness the song's irony every time we deal with the obstinate little one.

There's some social consciousness with "Gaia She Knows" tackling Earth Day (put down the pesticides) and a cover of Frances England's "Books I Like to Read" celebrating Read Across America Day. An overall sense of fun shines through, especially on tracks like "Smile About" and "We Can Be Heroes."

Across the country, Vincent Nunes has been recording and performing children's music for more than two decades. Based in Rochester, New York, we were unaware of his material until just recently. A longtime attorney, it was the birth of his daughter that drew Vincent to the world of children's music. With his kids now grown (and into the music world themselves), he is seeking to extend his reach past the tri-state region. 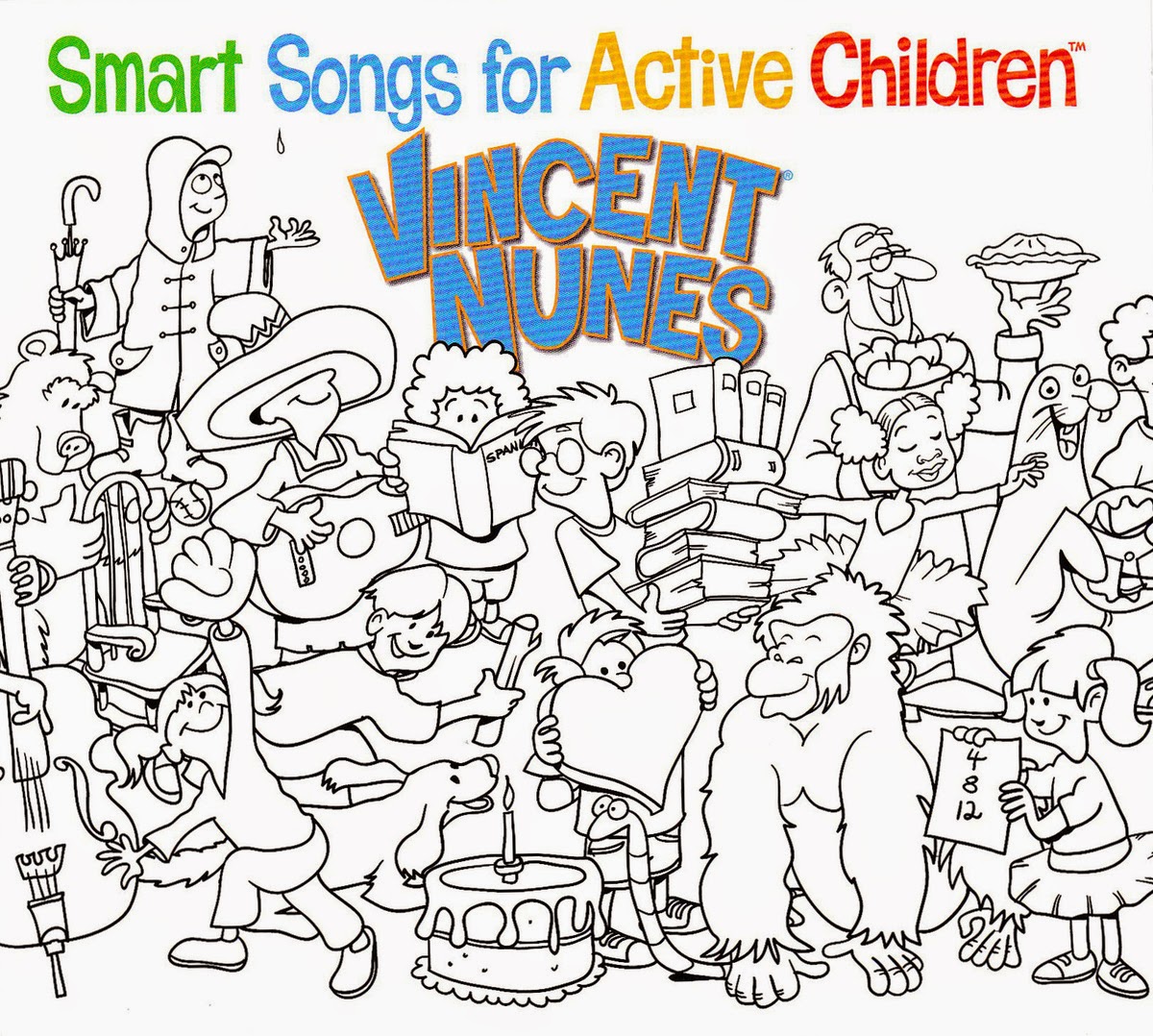 Vincent's new CD, SMART SONGS FOR ACTIVE CHILDREN, is about as self-explanatory as one could imagine. You get some story songs, like Bill Harley. You also get songs that sound right out of the Raffi catalog ("The Rain Falls on Everyone"). There are many performers (I've just named a couple) who are doing exactly the same thing, for just as long, with much more success. But that's a credit to them and not necessarily a knock on Nunes. One makes choices in life and chooses their priorities. Time will tell if he can maneuver into a prime position on the kindie scene.

Vincent uses his past as the song of a Portuguese musician with songs such as "They Speak Spanish (But in Brazil, They Speak Portuguese)" and "Lullaby for Lucy (A Portuguese Lullaby)." But the multi-cultural component is underplayed. The album certainly does not play like each song is a lesson unto itself. And you get some nice child harmonies from the Big Bad Kitchen Band Choir on "Mr. Murphy's Most Amazing Super Savings Store."

In the end, it all comes down to what your kids like to listen to, and what you want them to hear. We're still looking for new artists. And sometimes "new" means "existing" (who wants to call someone old). Whether it's the Hipwaders or Vincent Nunes, there's lots of stuff arriving on the scene. This fall, back to school also means back to the iPod and CD player.

YEAR-ROUND SOUNDS is available September 23 from the Hipwaders website, Amazon, iTunes, and CDBABY.

SMART SONGS FOR ACTIVE CHILDREN is available from Vincent Nunes' website and Amazon.

Here is the new video to Vincent's song "Nobody's Going to Keep Me Down":

Getting A Sunburn – Recess Monkey
The Bicycle Song – Eric Herman
Thingamajig – Lucky Diaz And The Family Jam Band
Caught in the Screen – Secret Agent 23 Skidoo
Apple Tree – Bari Koral Family Rock Band
Fill It Up – Josh And The Jamtones
Freak Out – Astrograss
Bird in an Airplane Suit – Caspar Babypants
Nutritious – Joanie Leeds And The Nightlights
Posted by MrJeff2000 at 4:01 PM No comments:

I'll say that about Caspar Babypants (aka Chris Ballew).

I don't mean it in a bad way, either. His stuff is consistent. Consistently good. For a guy who is producing one CD every nine months, on average, Chris has a pretty high batting average. 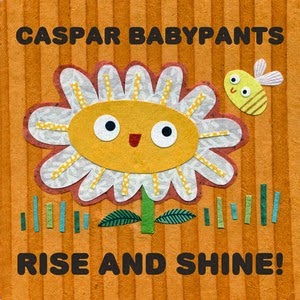 His eighth release, RISE AND SHINE! is no exception. After a Beatles-esque detour last year, Chris is back to mining the minds of preschoolers with a collection of original tunes and reworkings of chestnuts like "Rock A Bye Baby" and "Hush Little Baby." Instead of being reverent and treating the songs as sacrosanct, Mr. Babypants stretches them like taffy to their logical conclusions.

For pure silliness, you also get "The Girl With the Squirrel in Her Hat" and "Bird in an Airplane Suit." Chris is happy to provide the "stories behind the songs" on his website. However he has yet to get around to whatever original thoughts provoked these two tunes.

Chris is seriously dedicated to delivering silly and sweet children's music. With guest vocals from Rachel Flotard and Jen Wood, his latest disc is crammed with ideas, characters, and concepts. If there's any theme to RISE AND SHINE!, it's a "day in one disc." After "Good Morning," the littlest worm and the silly bird get their own songs (for some reason, the early bird helps close out the CD). The album ends with the one-two drowsy punch of "Sleepy Eyed" and "Bye Bye Day."

Let me be clear: Caspar Babypants is not trying to teach your children. He is not trying to force them to their feet to dance. He is not even interested in indoctrinating them to new styles of world or multi-cultural ethnic homogenization. He wants to entertain your kids, however long their attention spans may be. And if 19 songs in 49 minutes can't keep your wee ones from nipping at your heels, then you've got bigger fish to fry. Hmm, that's a concept ready-made for Chris.


Here is the video for Caspar Babypants' song "I Found You":

Till the Sun Goes Down – Poochamungas
Dream a Little Dream of Me – Zee Avi
The World Is a Wonderful Place  – Nora and One Left
Ice Cream Soup  –  Jambo
Show Me A Sign – Michael Franti & Spearhead
Rock Melon – Gustafer Yellowgold
Stay in the Pool  – Jason Didner And The Jungle Gym Jam
Metaphor  – The Alphabeticians
Working On A Bridge – Lloyd H. Miller
Posted by MrJeff2000 at 3:58 PM No comments:

Twenty years ago, Smithsonian Folkways released MORE MULTICULTURAL CHILDREN'S SONGS FROM ELLA JENKINS. Over time, that CD has gained traction and become a perennial favorite for families. Now the label is re-releasing it as part of a celebration of Jenkins' 90th birthday. 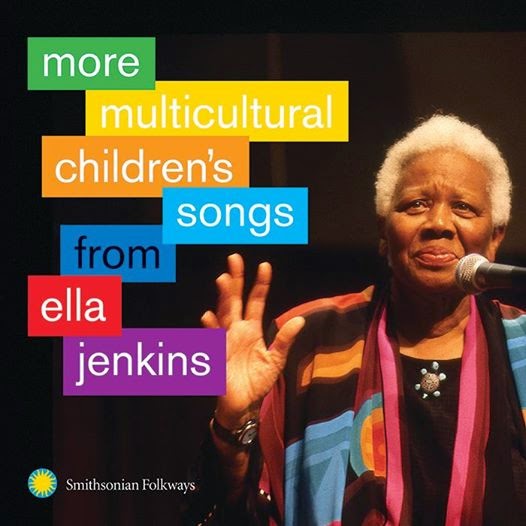 Many would say that current kindie performer Laurie Berkner has usurped Jenkins' title as "First Lady of Children's Music." However those would be the parents who are unaware that Jenkins has 60 years in the trenches, educating and entertaining kids around the world before Berkner was even conceived. She received a Grammy Lifetime Achievement Award in 2004 for her contributions to the recording industry. And the plaudits keep arriving in her golden years.

MORE MULTICULTURAL SONGS is pretty self-explanatory…it's a trip around the world (Hawaii, Puerto Rico, Germany, China, Greece, Russia) with tunes in many languages. As with most of Jenkin's oeuvre, there's a lot of call-and-response as well as hand clapping and other body movements. And there's nothing to a song as simple and expressive as "Shabbat Shalom" (repeat 300x).

The truest test is always exposing one's own children to the music and gauging their interest. Both kids recognized several songs and sang along, even to numbers that they had been unfamiliar with. Jenkins was a master of her craft and MORE MULTICULTURAL SONGS remains one of her seminal works. In her 90th year, she can rest well knowing her legacy is being preserved and that the traditions she fostered are being cultivated by her kindie disciples.

Till There Was You – Lucky Diaz And The Family Jam Band
Changes – David Bowie
Recess – Justin Roberts
Hundredaires – Dog On Fleas
Light of Love – Brady Rymer & The Little Band That Could
Shutterbug  – Recess Monkey
Kids in America – The Muffs
Take Back the Night – Justin Timberlake
Posted by MrJeff2000 at 4:17 PM No comments:

Great Day – The Not-Its!
Lightning Bolt – Pearl Jam
Mothership – Mr. Saxophone
Can We Buy a New Car (So I Can Have a Balloon) – Eric Herman
Glass Bottom Boat – Jason Didner And The Jungle Gym Jam
Mockingbird – Lee Alexander
Shake It Off! – Uncle Rock
Puppet Playground – The Pop Ups
Voodoo Doll – 5 Seconds of Summer
Posted by MrJeff2000 at 3:48 PM No comments:

Appetite for Music Builds for the Pop-Ups

The Pop-Ups are all about kinetic energy, which is also what kids are all about. It's no coincidence that these three things effortlessly merge on APPETITE FOR CONSTRUCTION, the duo's third CD. 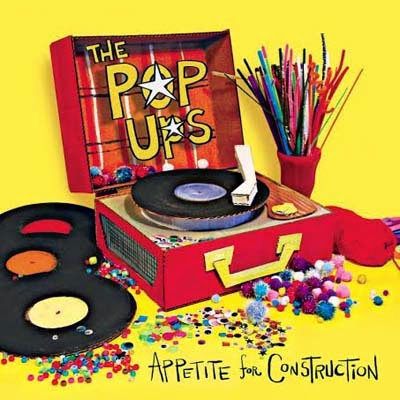 Their bio does not state how Jacob Stein and Jason Rabinowitz first met. But who really needs to know; I'm a children's music reviewer not the NSA. The guys set out to interact with the kids on their level and that includes activities. This may explain why "Glitter Everywhere" features a power saw sound effect.

In order to test their theory that building things was a good theme for their new release, the Pop-Ups released two singles, "All These Shapes" and "Costume Party." The songs received an enthusiastic reaction and heavy airplay on SiriusXM Kids Place Live. And a concept album was born.

Much like how Recess Monkey devise a theme and structure the songs around it, the Pop-Ups' checklist covers many bases: Build a companion? Check – the disco "Robot Dance." Making a collage? Yep – with horns and harmonies, "Pictures Making Pictures." Playing outside and dealing with insects – the 70s sounding "Bug Out."

You can't separate the arts from the crafts or the family from the participation aspect of the CD. "I wish that Craft Night was every single day," the guys sing on "Craft Night," and they mean it. The Pop-Ups may sound polished, professional, and peppy, but they're a work in progress. Why else would they produce their music (and t-shirts and puppets) in an open garage in Brooklyn? Possibly because they like kids? They really, really like kids? Yes, quite possibly that could be it. If the Pop-Ups had a mantra, it could be "the music is building and the building is music." Batteries not included, of course.

APPETITE FOR CONSTRUCTION is available August 19 from the Pop-Ups website, Amazon, and iTunes.

Here is the video for the band's song, "Costume Party":

a wild one – Justin Roberts
Desert Dogs – Shiprock and Anchordog
Fortune Cookie – The Little Rockers Band
You Are An Astronaut – Human-Tim + Robot-Tim
Duck Ellington – Lucky Diaz And The Family Jam Band
Pumpin Blood – NONONO
Is This a Joke? – Billy Kelly and the Blah Blah Blahs
Everything I Didn't Say – 5 Seconds of Summer
Posted by MrJeff2000 at 3:56 PM No comments:

Crayola Doesn't Make a Color for Your Eyes – Kristin Andreassen
Cheese World – The Dirty Sock Funtime Band
Grandpa Is A Time Machine – Recess Monkey
Everybody Out There  – Paul McCartney
Earn It – Hullabaloo
Shakin' Up The Pollen – ScribbleMonster
Fart Like a Pirate – Papa Crow
BroOKlyn – Mil's Trills
Don't Stop – 5 Seconds of Summer
Posted by MrJeff2000 at 4:48 PM No comments:

You Got It On – Justin Timberlake
Little Things – One Direction
Imagination – Shine and the Moonbeams
Like a Bird Must – Hullabaloo
Motorcycle Mom – The Not-Its!
She Looks So Perfect – 5 Seconds of Summer
It's a Beautiful Day – Suzi Shelton
Posted by MrJeff2000 at 4:11 PM No comments: