White Light - Wilco
Eep Oop Ork - The Jetsons
We Are Going To Be Friends - The White Stripes
Dixie Flier - Randy Newman
Jungle Boogie - The Sippy Cups
Pulling Mussels (From The Shell) - Squeeze
Here To Fall - Yo La Tengo
Everybody Get Dangerous - Weezer
That Thing You Do! - The Wonders
Chicken Noodle Soup - Yosi
Posted by MrJeff2000 at 4:24 PM No comments:

We're Making Heat - Dorothy Collins
The Uncomfortable Truth - Nneka
I Have a Little Dreidel - Yosi & the Superdads
Bein' a Kid - The Zucchini Brothers
We Are Going To Be Friends - The White Stripes
What Do You Like More? - Robin Vaughn
Weight Of The World - Ringo Starr
I Gotta Be Me - Secret Agent 23 Skidoo
Walk Tall - Ziggy Marley
It's Not Fair - Einstein's Monkey
Periodically Double Or Triple - Yo La Tengo
Posted by MrJeff2000 at 4:06 PM No comments:

Having Fun Monkeying Around

The kindie music scene has one constant: adults who play in bands for other adults. Those adults have kids, then begin to record music specifically for children.

From this constant, I introduce Einstein's Monkey, a trio from Virginia. Founding member Jeff Hofmann dropped me a line about their debut CD, "banana yellow," and its single (and accompanying video), "Pet Dinosaur."

Jeff and cofounding Monkey member B Bagby started playing together more than 20 years ago. But it wasn't until 2006 that they reunited to work together on a project that taught music theory to children at libraries and schools.

"banana yellow" is a well-produced CD of tunes. Ben particularly liked "It's Not Fair," since that's the refrain of one of his classmates (a refrain that he has unfortunately brought home with him). "Going Shopping (In the Shopping Mall)" tells the tale of a child who gets separated from his mother - "that's not mom, that's some guy in shorts named Todd!" There's also the amusing mall-associated "Mom Lost the Car (in the parking lot)."

In 2009 the duo became a trio by adding Dave McDonald to the line up. This resulted in a fuller sound at live performances, as well as opening up the band to more musical possibilities. 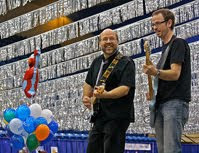 Ben is enjoying Einstein's Monkey. And since we're unlikely to visit Virgina in the near future, this is about as close to the band as we'll get for now. For a well-packaged and entertaining act, Einstein's Monkey is worth a listen.
Posted by MrJeff2000 at 5:52 PM No comments:

The Greatest Love of All - Whitney Houston
Look, Look! - Steve Weeks
Beanbag Chair - Yo La Tengo
Wake Up - The Verve Pipe
Come Play! - Eric Herman & the Invisible Band
Rattle My Bones - The Suburbs
Susanne (Single Version) - Weezer
History Never Repeats - Split Enz
Fell In Love With A Girl - The White Stripes
Funky Monkey - Yosi & the Superdads
That Thing You Do! - The Wonders
Casper The Friendly Ghost
Posted by MrJeff2000 at 3:34 PM No comments:

Why Go Up There? - Tom Glazer & Dottie Evans
If Mama Had Four Hands - Sarah Lee Guthrie & Family
Teach Your Children Well - CSNY
Inside My Cranium - Roger Day
Flaming Pie - Paul McCartney
This Is Our Story - Shrek soundtrack
Oh My My - Ringo Starr
My Brother The Ape - They Might Be Giants
From Me to You - The Beatles
Oliver's Army - Elvis Costello
Let The Good Times Roll - The Cars
Iko Iko - Cyndi Lauper
Cows - The Suburbs
Posted by MrJeff2000 at 4:47 PM No comments:

I Won't Grow Up - Dan Zanes & Friends
Little Sack of Sugar - Harmonica Pocket
Strawberry Jam - Michelle Shocked
You Don't Know Me - Ben Folds Presents: The University Of Georgia's With Someone Else's Money
One Day Soon - The Sippy Cups
Black Horse & The Cherry Tree - KT Tunstall
Come as You Are - Peter Wolf
Funky Monkey - Yosi & the Superdads
Planet Claire - The B-52s
(If You're Wondering If I Want You To) I Want You To - Weezer
Posted by MrJeff2000 at 3:52 PM No comments:

Green Teeth - The Zucchini Brothers
White Light - Wilco
I Have a Little Dreidel - Yosi & the Superdads
Walk Tall - Ziggy Marley
Brush Brush Brush - Of Montreal
Here To Fall - Yo La Tengo
The World Has Turned and Left Me Here - Weezer
Forever Your Girl - Paula Abdul
It's Not Fair - Einstein's Monkey
The Addams Family theme
Posted by MrJeff2000 at 4:37 PM No comments:

Jamming With the Jimmies

We've seen a gamut of shows at New York's Symphony Space, from the acoustic storytelling of Randy Kaplan and Tom Chapin to last Saturday's rocking performance by The Jimmies. If the Leonard Nimoy auditorium conjures up images of lectures and alt-jazz, free your mind and your feet will follow.

Lead singer Ashley Albert and musicians Dan Weiner (drums), Josh Myers (bass), and Oscar Bautista (guitar) delivered nearly one hour of positively-charged rock that pleased parents as well as a preschool mosh pit that formed at the front of the stage. 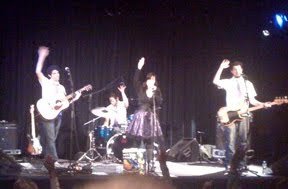 Starting with "Tea Party in the Sun," the band went from a slow pace to medium and then full-on rocking out with "Cool To Be Uncool" and "Bedhead" (the latter was turned into a game of 'freeze quack.'

The Jimmies started three years ago as almost a concept project, as Ashley recorded the album, "Make Your Own Someday" with studio musician Steve Gordon and her father, Howard Albert. Ashley returned to New York and filled out the original lineup, which began playing concerts in the metropolitan area. We first saw the band play at Stinkfest, a children's music gathering in Brooklyn in 2008. Since then, the band has also released a DVD/CD combo called "Trying Funny Stuff" and has a second album in the works. 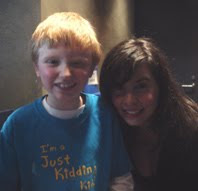 The January 16 show featured a mix of recorded material and tracks from the next release, including, "Soaper the Scaredy Bot," about a timid robot, and the upcoming title track, "Every Day's a Holiday With You." Children in the audience ranged from infants to 50-somethings, and all participated in batting around giant beach balls, finger-snapping, hand-waving, and other sundry rock concert activities.

Smoothie - Kimya Dawson
Everyone Asked About You - Bob McGrath
Ya Ya - Lee Dorsey
This Is Your Body - Baze And His Silly Friends
What Do You Like More? - Robin Vaughn
Smile - Ky-Mani Marley
The Climb - Miley Cyrus
Twiggy Twiggy - Pizzicato Five
Perfect World - Huey Lewis & The News
Barking At the Moon - Jenny Lewis
Posted by MrJeff2000 at 4:14 PM No comments:

Ben Is Prepared to Rock - Bill and Ella
We Are Going To Be Friends - The White Stripes
Beanbag Chair - Yo La Tengo
Wait Your Turn - Mr. RAY
Play With Your Food - ScribbleMonster
Use Your Words - The Sippy Cups
The Bluegrasshopper - Secret Agent 23 Skidoo
I Think I Got You Beat - Shrek & Fiona
Undone (The Sweater Song) - Weezer
The Addams Family
Posted by MrJeff2000 at 3:57 PM No comments:

Let It Be Me - The Everly Brothers
Better Together - Jack Johnson & Buena Vista Social Club
Buddy Holly (Acoustic) - Ben Folds Five
Go to the Playground - Adam and the Couch Potatoes
My Imagination - Baze And His Silly Friends
Bouncing Off the Walls - Mr. Leebot
Shpilkas - Bunny Clogs
Back Off Boogaloo - Ringo Starr
Nicky Nicky Knock - Dream Jam Band
The World Has Turned and Left Me Here - Weezer
Every Day's a Holiday With You - The Jimmies
Posted by MrJeff2000 at 3:41 PM No comments:

Salamander Green - Ralph Covert
Happy, Happy Birthday - Baze And His Silly Friends
Chick A Boom Boom - Mocean Worker
Love in My Food - Killian Mansfield
Coconut Woman - Karl Zero & THE Wailers
Movin' On Up - Primal Scream
Bonobo Joe & the Voodoo Queen - The Hipwaders
Raise the Brain - Miz B
Meet Me Halfway - The Black Eyed Peas
I Don't Need Anything But You - Dan Zanes & Friends
Posted by MrJeff2000 at 1:45 PM No comments:

What Is A Mammal? - Marais & Miranda
Honey Honey - Feist
Tango Forever - Mel Glazer
Fallin' For You - Colbie Caillat
Our House - CSNY
Beautiful Ride - Dewey Cox
Roncando - Dean Jones
It's Not Fair - Einstein's Monkey
It's The Beatbox - Cathy & Marcy With Christylez Bacon
In The Mall - Weezer
Working On A Dream - Bruce Springsteen
Hooked on a Feeling - BJ Thomas
Posted by MrJeff2000 at 4:20 PM No comments:

It's the Beat, Silly

Okay, you've won two Grammy awards with your harmonic folk children's music. What do you do next? How about incorporating hip-hop?

Pick your chin up from the floor. That's what Cathy Fink and Marcy Marxer (collectively known as Cathy & Marcy) have done with their latest CD, "Banjo To Beatbox." The duo brought in Washington, DC-based rapper Chrsylez Bacon to join them on several tracks, most notably the catchy, "It's the Beatbox."

The recording duo, who met at the Toronto Folk Festival in 1980, captured their first Grammy Award in 2004 for their children's album Bon Appetit and won their second in 2005 for cELLAbration: A Tribute to Ella Jenkins. This album brings together two diverse musical styles, which wouldn't ordinarily seem to work together, and fuses them for a wider audience. 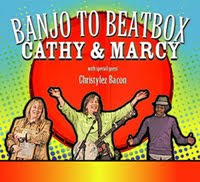 Can you go from human beatbox back to "Froggy Went A'Courtin'?" Actually, you can. Well, they can. Clearly somebody approves - the CD has been nominated for a Grammy Award! We enjoyed the music, with Ben's favorites being "New River Train" (think Indigo Girls down in the swamp) and "Hip Hop Humpty Dumpty."

The CD also comes with live concert QuickTime videos, so you can view for yourself!
Posted by MrJeff2000 at 2:36 PM 1 comment: