Inside the Full Forest Sound of the Hollow Trees

The Lawrence Welk Singers never called themselves "Welk." Buddy Rich never branded his bandmates as "The Rich Family." Music took a turn after the Ramones, even though kids' performers have assumed alternate identities for decades (Paging Captain Kangaroo). Bears & Lions may take it to an extreme (I defy you to find their names through a web search). At least the Hollow Trees freely fess up that it's all an act – singer and band leader Gregory Hollow Tree is, in fact, Gregory Mcilvaine. 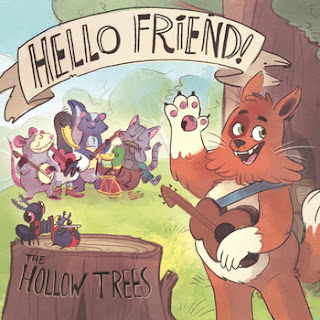 After a respite, the Hollow Trees are back with their fourth CD, HELLO FRIEND. Continuing the folksinging stylings he learned from Burl Ives in his youth, Gregory realized he could use his powers for good after stumbling across Dan Zanes and Friends' kindie offerings. With a healthy dose of female lead vocals from Traci Hollow Tree (Traci Green), the Hollow Trees remind me quite a bit of the late (if not lamented) Wee Hairy Beasties, another amalgam of musicians who came together to deliver collections of similarly clever, quirky kids tunes. The Beasties also used pseudonyms
as John Langford was billed as "Cyril the Karaoke Squirrel," Sally Timms was "Monkey Double Dippey," and singer/songwriter Kelly Hogan was "Marjorie the Singing Bee."

One of the best things about kindie music is that nobody ever has to ask "Who's going to listen to a jug band bluegrass album" or "Where's the market for alphabet-themed reggae?" Kindie, by its largest definition, envelopes genres and processes them into a child-friendly format. The Hollow Trees have spent five-plus-years culling old-timey favorites like "Poor Papa" with endearing originals such as "Guitar You Gonna Sing Along" and "The Harmony Hills," which would not be out of place on a Red Yarn or Okee Okee Brothers CD.

Like Red Yarn, the Hollow Trees have cultivated a fictional landscape (the tertiary Hollow Tree and its chief resident, Nelson the animal of indeterminate origin). Natch, there's a puppet by that name who appears at the band's live shows. It's part of the Hollow Trees' multimedia appeal, if you get the opportunity to see them in concert.

The music of the Hollow Trees was borne from the heartland and harkens back through the generations. Yet they bring forth a SoCal spin with "What Do You Want On Your Taco" and the theme park anthem "Merry Go Round," complete with calliope breaks. Title track "Hello Friend" could be a Grand Ole Opry opening number. The Hollow Trees seek to be your child's newest and oldest friend at the same time. It's a quirky conundrum but they pull it off. I can't say that Gregory has out-Zaned Dan Zanes, but while Zanes stays mainly in the plains, the Hollow Trees have gone 'round the mountain to craft their own identity as West Coast mainstays. HELLO FRIEND expands the 2016 kindie quest into the underbelly of Americana. Perhaps it's the election year, perhaps it's just a longing for more traditional values. Your kids won't mind – they just want to know what the heck is Nelson?