Dream of You - Alan Wolpert
Up the Junction - They Might Be Giants
The Time (The Dirty Bit) - Black Eyed Peas
Marry You - Bruno Mars
Your Favorite Book - Recess Monkey
When I Get Little - Dog On Fleas
Free Your Mind - En Vogue
Darwin - Artichoke
Tommy Got In Trouble - The Bazillions
Twistification - Dog on Fleas
Posted by MrJeff2000 at 4:40 PM No comments:

I Love New York- New York, New York - Glee
Things Behind the Sun - Nick Drake
Check It Out - Casper Babypants
Stronger Than Me - Amy Winehouse
Antmusic - Adam & the Ants
Super Sonic Rocket Bike - The Bazillions
E=MC2 - Big Audio Dynamite
Octopus - Artichoke
So You Want To Be A Rock 'N' Roll Star - The Byrds
The Birth (Journey to the Light Part 2) - Cloud Cult
Posted by MrJeff2000 at 4:19 PM No comments:

Hey, Josie! - The Hipwaders
It's Hard To Be A Kid - Daddy A Go-Go
Bubble Test - Daniel Hales & the Frost Heaves
In the Land of Dreams - Kesang Marstrand
Hometown Glory - Adele
TV - Music For Aardvarks Presents David Weinstone
Sunshine - DeVotchKa
Mommy Saved The Day - Stacey Peasley
All The Young Dudes - Mott The Hoople
Posted by MrJeff2000 at 4:58 PM No comments:

It takes a great deal of dedication to focus your musical career on the whims of the six years-and-under set. For one thing, they will "age out" of your oeuvre pretty quickly. Secondly, they have no idea what "oeuvre" means. Finally, you need to keep the subject matter pretty basic. There will be no lessons about global economics hidden in a song like "Fun, Fun, Fun."

Boston area educator and performer Stacey Peasley has taken the job with a smile. A professional singer for over 15 years, she began to adapt her craft to children’s music in 2005 after attending shows with her older child and listening to children’s artists together. 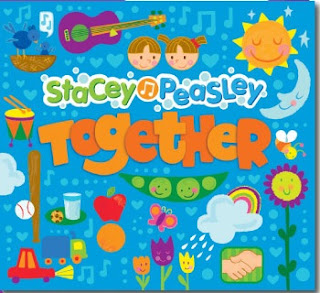 Stacey started her performance career in the girl group “The Chiclettes,” where she developed a deep love and appreciation for the innocent, yet catchy songs of the girl-group era. "The beautiful melodies and sweet harmonies have been an inspiration in my songwriting," she said. The group continues today, with another set of performers.


As for "Fun, Fun, Fun," this is not exactly the Beach Boys version:

thereʼs so much we can do

With a six-month-old in the house, we appreciate any song about having fun with a babysitter, which is definitely in our (new) son's future. So a big thumbs-up for "Jen," which joins Uncle Rock's "Rock and Roll Babysitter" in the must-play-in-the-future playlist. Mothers will be happy with "Mommy Saved the Day," while dads get a half-hearted dig in "Sleep Again":

Being in my room again is really boring

I'd rather be with Daddy even if he's snoring.

As stated, you're not going to find the solutions to climate change on a children's CD. But TOGETHER gives listeners 13 hummable numbers that will charm your youngest charges, and possibly give you a chance to catch up on adult pursuits (bill-paying, clean up, reading the paper, phone calls).

And a good thing about appealing to the younger set? You always have a new audience, every few years. You could safely say that Stacey Peasley aspires to be some children's first "favorite musician." And that outweighs the negatives.
Posted by MrJeff2000 at 8:12 AM No comments:

What Colour Is Your T Shirt? - Nick Cope
You're Not The Bossa Nova Me - Daddy A Go-Go
Rolling In the Deep - Adele
One Less Lonely Girl - Justin Bieber
Sound of Sunshine - Michael Franti & Spearhead
Check It Out - Casper Babypants
Darwin - Artichoke
Gee Angel - Sugar
Loser Like Me - Glee
Nothin' On You - BoB ft. Bruno Mars
Posted by MrJeff2000 at 4:59 PM No comments:

The City Grew Up Around Her - Caroline Herring
Hail The Creatures - Dan Zanes
Things Behind the Sun - Nick Drake
Summertime - Ella Fitzgerald
Robot Pirate - Ratboy Jr.
Mighty Milo - Music For Aardvarks Presents David Weinstone
I Meant To Do That - Jeremy Plays Guitar
I Shall Sing - Grenadilla
The Lazy Song - Bruno Mars
So You Want To Be A Rock 'N' Roll Star - The Byrds
Posted by MrJeff2000 at 4:40 PM No comments:

People Take Pictures of Each Other - The Kinks
Sunday Morning - GMG Jam
Burn It To The Ground - Nickelback
The Time (The Dirty Bit) - Black Eyed Peas
Scootdootdoodlydoo - Billy Kelly
Muriel's Hoof - Soft Boys
The Rockford Files - Mike Post
Stronger Than Me - Amy Winehouse
In Wonder With the World - The Boogers
Tommy Got In Trouble - The Bazillions
Sesame Street Theme - ScribbleMonster
Posted by MrJeff2000 at 4:15 PM No comments:

The ever-prolific Recess Monkey trio (Daron, Jack, and Drew) is back with their unprecedented seventh CD in as many years. "Flying" renews their celebrated exploration of childhood themes, this time wrapped in a superhero motif. 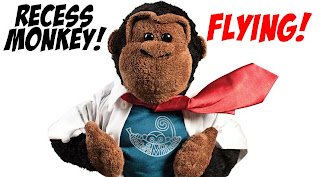 Aside from the title track, the Monkey men sing about "The Bravest Kid in the World," "Invisible Friend," and "Sidekick," which gently considers how children determine just who is the hero and who is their sidekick:

We could build a motorbike, with a reinforced side car

Or design a super-copter, if we have to fly real far

The important thing is this, it just has to fit we two

And if you want to be the leader, I'll be the sidekick for you

You want guest appearances? How about a Dean Jones trombone solo? You also get Molly Ledford (from Lunch Money) for a duet on "Invisible Friend." Plus Caspar Babypants and even more.

We were introduced to Recess Monkey through Bill & Ella Child's Spare the Rock podcast. In the past year, we've managed to see them live three times. No small feat when we live across the country. First, they performed at Kindiefest 2010 in Brooklyn, where I recorded Marshmallow Farm:

We then caught them at Symphony Space over the winter. The big surprise was when they turned up at Kindiefest 2011 and joined the Verve Pipe on stage.

You Can Write A Song (featuring Recess Monkey)

Here's how I know that Ben is impressed by someone - he becomes shy. Whether it was a preschool instructor that he had a crush on, or a musician that he really likes. Not that he doesn't like some of the people he's met in person, such as Ashley and the Jimmies or Molly and Lunch Money. When Ben saw that Recess Monkey was in attendance, he grew a big smile - but he did NOT want to approach them after the show.

The Recess Monkey CDs are always in playing rotation in the car (our main source of traveling entertainment). With a baby now joining us for most trips, there is nothing more pleasing than a dose of Recess Monkey to help us pass the time on the road.

Recess Monkey know their audience and its parents. We don't want the kids over-stimulated or talked down to. The kids don't want constant commands ("Let's see you be a plane!") built into their songs. After all, do "adult" pop songs repetitively demand you "get on the dance floor..." uh, never mind... Bad comparison.

Who would ever think that a chimp would make a good role model for children? Simian puns aside, Recess Monkey appeals to all ages. A banana peel! Okay, I had to squeeze in one last reference. The male school teacher, for young children, is a rarity in our experience. And these guys have taken their day jobs and a love of music and produced a hearty selection of delightful tunes. In conclusion, get monked!
Posted by MrJeff2000 at 9:24 AM No comments:

Wake Up Clarinet - Oran Etkin
Wake Up - The Verve Pipe
Ruling Me - Weezer
Sunshine - DeVotchKa
Rolling In the Deep - Adele
Only Girl (In The World) - Rihanna
Don't Dream It's Over - Crowded House
I Don't Want To Know - Glee
Flying - Recess Monkey
Posted by MrJeff2000 at 3:19 PM No comments:

I Love New York- New York, New York - Glee
You're Not The Bossa Nova Me - Daddy A Go-Go
Be Thankful For What You Got - Yo La Tengo
All The Animals - Joanie Leeds & The Nightlights
Check It Out - Casper Babypants
ÜBerlin - R.E.M.
TV - Music For Aardvarks Presents David Weinstone
Octopus - Artichoke
Ridin' On a Pony - Dog On Fleas
Synonym Toast - Jeff Warren
Posted by MrJeff2000 at 4:02 PM No comments:

A George Clinton double bill this am!
Posted by MrJeff2000 at 3:44 PM No comments: