Have A Good Day, Courtesy of LARD Dog

Right this way for a ride to New Orleans. 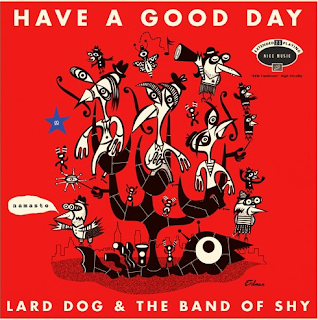 LARD Dog and the Band of Shy are back with their latest free "song of the month." The eclectic collection of characters has concocted a carefree confectionary treat, entitled "Have A Good Day." It starts with some Satchmo scat and horns and includes a celebrity cameo (no spoilers).

Continuing the LARD Dog philosophy, there are a ton of throwaway mentions, from MAD Magazine to ping pong to "slurp the noodle" (an ongoing LARD tradition in the Band of Shy).

Best of all, you can "Have A Good Day" for free this month. That's right, the song is FREE for download until June 22. So click on over, submit your email, and extract some peppy encouragement.
Posted by MrJeff2000 at 11:27 AM No comments:

Animal Kingdom – Key Wilde And Mr. Clarke
The Great Divide – The Okee Dokee Brothers
My Favorite Sneakers – In The Nick Of Time
My Magic Helicopter – Danny Weinkauf
The Only One – Brady Rymer & The Little Band That Could
People Watching – Dean Jones
Skeleton Rag – The Salamanders
Posted by MrJeff2000 at 6:30 PM No comments:

"We Are the World" was more than a song title, it was the start of a movement.

People fondly remember the 1985 mega-fundraiser that drew attention to poverty and hunger.
Many have attempted to recreate that ensemble and the sentiment of the charitable endeavor.

Now there's a kindie version focusing on preserving creatures in our national parks, animal sanctuaries, and in the wild. Just in time for Endangered Species Day, the Whizpops are debuting a video for their song, "Extinction Really Stinks."

Last year, the Whizpops released RANGER RICK'S TRAIL MIX, VOLUME 1 to commemorate the occasion. This year, they up the ante with the video, featuring the talents of Aaron Nigel Smith, Jack Forman (Recess Monkey), Bill Harley, the Pop-Ups, and others).

Enjoy the music, listen to the message, and explain to your kids what the fuss is all about.

Once you win a major award, it changes how people relate to you. However it doesn't have to change the way you relate to people, especially children. Grammy winner Tim Kubart (see what I did there) continues his run of local performances this weekend at Flushing Town Hall at 2:15 pm. Next month, he has two concerts scheduled at the Paramount Hudson Valley Theater in Peekskill, NY, on Sunday, July 9.

Here is a brand-spanking new 2017 remix of "Superhero," featuring Sunny Side Up cohost Carly Ciarrocchi:


LARD Dog and the Band of Shy will be doing an autism-friendly performance of their multi-media extravaganza at 11 am on Saturday, June 10 at the People's Improv Theater in NYC. While my son has handled regular gigs thus far with no issues, this special performance will be delivered in a relaxed atmosphere where guests can talk and vocalize, exits and re-entry will be permitted, and there will be a"Chill Zone."  House lights will be on (dimmed) and no flashing lights will be used on stage. No balloons or interactive props will be used at this performance. Here is a trailer of a regular LARD Dog show – picture with the aforementioned accommodations.

Breakfast For Dinner – Jojo & The Pinecones
Bubbles – The Salamanders
Don_t Let The Boogah Bug You Out – LARD Dog
Ferry Nice – Joanie Leeds & The Nightlights
Jersey Dinosaurs – Jason Didner and the Jungle Gym Jam
Must Be This Tall – Justin Roberts
Posted by MrJeff2000 at 5:46 PM No comments:

Forget Five Hour Energy drinks. Mista Cookie Jar (CJ Pizarro) knows that all the kids need is a boost of serotonin to get them motivated, pumped, and moving.

In fact, his new song is just that – "Serotonin." 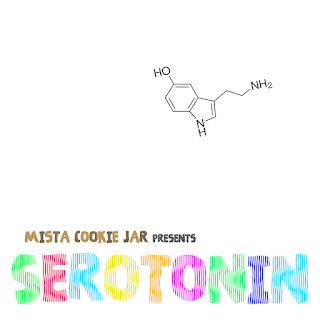 Starting with a Li'l Wayne-esque auto-tune, the song deftly explains and illustrates how a person's body chemistry controls their emotions and physical state. In the event it sounds too technical, remember that the average age of the listener is not expected to be in double digits.

Chemicals. Dopamine.
Now what's dat
supposed to mean?
Dats a funny name
for the happy in your brain.
Serotonin,
like when somebody says,
"I'm golden!"
There's a joy when you keep your heart and mind wide open.

CJ has recently done some collaborative work, but I was surprised to learn that "Serotonin" is his first solo song in one year. It's kind of like watching someone (or hearing someone) flex a muscle. Click on over and hear for yourself. And prepare for more as he opens the cookie jar later in 2017.
Posted by MrJeff2000 at 8:38 AM No comments:

All Around the Kitchen – Andy Z
By The Light – Red Yarn
Cloud Skateboard – Mo Phillips
Do You Talk To Yourself – Dean Jones
Ghostbusters – Andrew & Polly
Happiness – Wilco
So Gazed Upon – Cat Doorman
Posted by MrJeff2000 at 4:03 PM No comments:

Joanie Leeds & the Nightlights: Back in Brooklyn, Baby 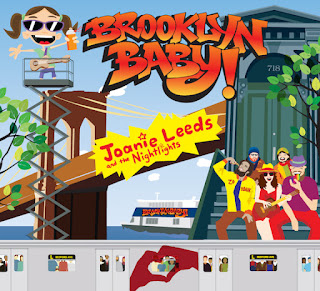 There is no starter's guide for childhood. And even if there was, babies would just gnaw at it. By the time toddlers would be old enough to read it, they'll have already ripped it apart. And would any writer really trust helicopter parents not to censor the parts about "over-sensitive and over-protective" mamas and papas at bedtime? The happy replacement is, of course, family music – albums with kid-friendly instructional or informative songs that possess a sly parental edge. With parenthood comes experience. Now-a-mom Joanie Leeds, and her Nightlights, have returned with their first post-child CD, BROOKLYN BABY.

Ms. Joanie has stated that she intended to write another collection of themed songs, similar to WHAT A ZOO. The obvious choice of her current borough, Brooklyn, was, well, obvious. A baker's dozen of loquacious location-conscious GPS-setting, toe-tapping tunes later, her quintet produced BROOKLYN BABY (the title itself a play on words for her toddler daughter, which is also often used as a common rap saying).

Cognizant of the old stigma of Brooklyn being an "outer borough," the Nightlights navigate listeners away from Manhattan via "Subway" and the first track, "Ferry Nice." It's almost like the group is kicking for a licensing deal to promote the new Waterways transit service. Songs for those who can walk untethered under a turnstile include "By Myself" and "Library Book," which carries a little "9 to 5" vibe. "Brooklyn Baby" is a ballad (one of three on the CD) penned as a love song (one of two on the CD) to Joanie (and drummer Dan)'s daughter. Taking the classic novel "A Tree Grows in Brooklyn" as a starting point, Joanie sings:

The anthemic power ballad "Love Is Love" spoonfeeds the concept of inclusion as by-the-book as possible, right down to a verse with "It doesn't matter if you have one mom or two / if you're a Muslim or a Jew / If your clothes are old or new." Staying close to her PJ Library roots, Joanie sews a bevy of semitic terms into "Shayne Punim" (Grandma will plotz!). "Rainbow Bagels from Outer Space" channels 1970s punk icons Blondie. In terms of rebranded material, there's a remix of GOOD EGG's standout track, "Hipster in the Making," which fits snugly and smoothly into this CD's wheelhouse, as well as a dreamy, faithful cover of the Velvet Underground's "Sunday Morning" to close your mental road trip.

My kids provide the truest acid test for any new music. In a bygone era, Life cereal wasn't good enough unless "Mikey liked it." Driving around with my six-year-old (Matt) and having him pick up enough of the chorus to sing "Ferry Nice" or "Rainbow Bagels from Outer Space" is one thing. Watching him play with his wrestling action figures and break into "Library Book" helps make my recommendation a thumbs-up. BROOKLYN BABY shows there's no performing rust, no lack of imagination or ingenuity, and certainly no musical postpartum depression from Joanie Leeds and the Nightlights.

BROOKLYN BABY is available on May 19 from Joanie Leeds' website, Amazon, iTunes, and CDBABY.