My Take on Charlie Sheen v Chuck Lorre and CBS

Let’s set the record straight as far as TWO AND HALF MEN and CBS goes.

TWO AND A HALF MEN premiered on Monday nights in the 2003-2004 season, following the top ten hit, EVERYBODY LOVES RAYMOND.

To make room for the new show, CBS moved Ted Danson’s BECKER to Wednesday nights. They could have easily just programmed Sheen’s show for that night – and effectively killed it. Instead, they gave it the BEST slot and instantly made it a top 15 series. Left to stand alone, BECKER died. 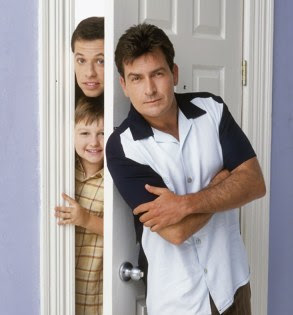 Two seasons later, RAYMOND went away – and CBS moved 2 1/2 MEN into the 9 pm drivers seat. They could have shifted KING OF QUEENS to 9 pm and moved 2 1/2 MEN elsewhere on the schedule. But they had the confidence that the show – which had outdrawn RAYMOND in its final year – could drive the night. And they were correct. But once again, CBS could have used the show to “drive” another night, and possibly killed it. They didn’t.

So CBS has basically coddled the series and everybody made a mint, from Charles Levine (Chuck Lorre) down to Carlos Estevez (Charlie Sheen).

And let's not forget that at the time TWO AND A HALF MEN was conceived, John Cryer was seen as TV poison after four flops (FAMOUS TEDDY Z, PARTNERS, GETTING PERSONAL, and THE TROUBLE WITH NORMAL). Sheen was a B level movie star with two seasons carrying Michael J. Fox's jock on SPIN CITY as his only success in TV. Chuck Lorre, coming off DHARMA AND GREG, was the force behind the show.

If Charlie Sheen is so confident of his drawing power as a sitcom star, he should sign a waiver and let ABC build a new show around him and debut it next September in the Monday 9 pm slot, against a rebuilt 2 1/2 MEN featuring Scott Baio as Charlie Harper, back from Paris with some minor plastic surgery. Anybody want to take bets on the ratings outcome? I didn’t think so.
Posted by MrJeff2000 at 4:59 PM No comments:

What Is An Animal? - Marais & Miranda
The Thing That Helps Me Get Through - Michael Franti & Spearhead
Arabella Angelique - Grenadilla
Rich Girl - Gwen Stefani & Eve
The Channukah Medley - Gwendolyn and the Goodtime Gang
Do The Turnout - Deedle Deedle Dees
California - Luna
Mule Train - Frankie Laine
Down To Earth - Peter Gabriel
Starman - Golden Smog
Posted by MrJeff2000 at 4:55 PM No comments:

A Gold Star for Yellowgold

Fourth Collection Is A Charmer

I heard the Pink Panther theme first, then became familiar with the cartoons, which came later. Next came a generation of children who knew all about the cartoons, but had no clue that the famous Henry Mancini theme was originally for a series of movies. We came full-circle when I played the track for Ben, who began to choose it for his playlists back in 2005-2006. 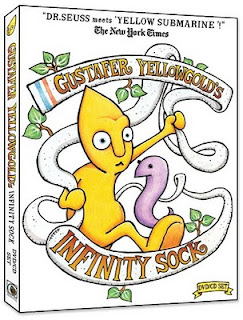 This is all prologue. In the same time period, the Spare the Rock childrens' music program (and podcast) started playing the songs of Gustafer Yellowgold by Morgan Taylor. When we learned that Morgan would be performing a Gustafer set at the nearby Museum of the Moving Image, we made a point of going. We arrived early, walked in, and found the auditorium was playing...Pink Panther cartoons. Ben looked at us, stunned, as if to say, "You mean the music is for this?"

Many of the musical selections that Ben chose from those days have faded away - he either grew out of them, or they just didn't strike his fancy anymore. But Gustafer has stayed with us. And grown on us. And now Morgan has released the fourth CD/DVD collection, "Infinity Sock," and it's still as charming (and yellow) as the Pink Panther (is pink).

After that AMMI performance, we retreated to the snack bar. Ben kept looking over my shoulder and when I turned around, I saw that he was watching Morgan having a snack of his own. I couldn't help but approach him as we left, to compliment him on the imagery and music, which I did find unique in the world of childrens' entertainment that we were just beginning to explore. My one concern was the seeming lack of a cohesive story. Yes, Gustafer was a concert experience. But at that time, every song seemed to introduce a new element. And then the show just stopped. A last song and thanks for coming. "Yes, I'm working on that," Morgan told me. And indeed he has.

"Infinity Sock" tells the tale of Gustafer, a denizen from our Sun, who now lives in Minnesota with his pet eel. While doing laundry, Gustafer discovers that one of his eel's socks seems to stretch for eternity. In searching for the toe-end of the longest sock in the universe, Gustafer encounters a number of characters and situations.

We were all sucked in by the simple melodies and lyrics. I even copied "Infinity" into my playlist for commuting. Morgan's style for Gustafer songs harkens back to the styles of David Gates and James Taylor. Hope the reference to the former doesn't come off as an insult.

And while we've been hearing the songs since 2005, it's been some time since we sat down and watched more than one video. After watching the DVD in one sitting (not a problem if you have 35 minutes), the story was easy to follow (except perhaps for our three-month-old). And with the lyrics right on screen, it was hard not to sing along.

Bonus features (on the DVD) include Morgan giving a guitar lesson on how to play certain Gustafer songs, as well as how to draw Gustafer. There is also a tongue in cheek "science report" on whether or not Gustafer Yellowgold actually exists, hosted by Professor Orel Harnkess from the Huckaku Verification Center in St. Paul, Minnesota.

What comes around, goes around. It was true for the Pink Panther and it's true again for Gustafer Yellowgold. A few years down the road, perhaps for the next collection, we'll be ready to hit the road with both kids and attend another song performance - one with a full story and a batch of songs we know and are ready to sing. "Infinity Sock" leaves me hoping there are more Gustafer stories that Morgan wants to tell.
Posted by MrJeff2000 at 11:09 AM No comments:

How Exactly Does An Aardvark Sound?

Not another punk rocker turned exceptional childrens musician! Boy did people hate hate hate punk rock when I was in college (let's not think of the years). After most of the music from that era has faded, you wonder what happened to many of the players. Not in a "Behind the Music" kind of way. In a "what are they doing musically" kind of way. 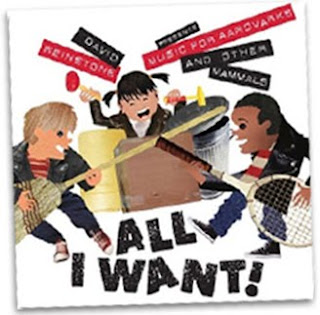 Enough prologue. David Weinstone grew up. And devolved back to his childhood, with Music for Aardvarks & Other Mammals. Their newest release, All I Want! is coming in March to many fine music outlets.

Since we somehow managed to move past Nick Jr. without viewing his music videos, our exposure to Weinstone comes from a fresh perspective. Ben liked "Better Keep An Eye on Me," with the phone-mentioning verse:

They're expensive; man they should

I can't climb but I love stairs

I think you better bet, I'm doin' something somewhere


And I know that "Beach Song" is a simple ditty about, well, the beach, the acoustic guitar track felt reminiscent of the Beatles' "Norwegian Wood."

Weinstone gained popularity through his "Music for Aardvark" classes for children. As should be expected, anything good for kids gains a reputation, following, and rocket blast of respectability. More than 10 years later, parents like Helen Hunt, Jon Stewart, and others swear by his rollicking music and easy to sing lyrics.

"All I Want" continues in that vein. You've got country ("Fishin' Song") and bluegress ("Count to 10"). Psychedelia? "TV" goes there. Rock is covered (the title track). Imagination building? Try "Pop Corn Tree." And Woody Guthrie's "I Want A Puppy!" gets to kick-start Weinstone's 16 (SIXTEENTH!!!) CD.

Nothing lasts forever. And 15 years is a long time. Hopefully Weinstone will stick around for a few more years, when Matt is ready to attend one of his classes. Music for Aardvarks prevails, thankfully for other mammals like us.
Posted by MrJeff2000 at 11:21 AM No comments:

I Still Believe - Frank Turner
Say, Say, Oh Playmate - April Smith & The Great
I'm On My Way - Bill Harley
Count Me In - Trout Fishing in America
Dr. Worm - Jason Trachenburg
Shake! - Flannery Brothers
Arabella Angelique - Grenadilla
I've Just Gotta Get A Message To You - The Bee Gees
No One Said It Would Be Easy - Cloud Cult
I Go Swimming - Peter Gabriel
Check It Out - Casper Babypants
Posted by MrJeff2000 at 3:51 PM No comments:

Buy A CD, Rescue An Animal

I spent many enjoyable afternoons in Manhattan theaters as a child, seeing shows that (sometimes) went way above my head. We've taken Ben to exactly ONE Broadway production (Shrek the Musical), which he loved. We'll take him back, but that's another story.

People find their way to Broadway in numerous ways. Jamie Broza was literally born into it - his father, Elliot Lawrence was a musical director. The influence is obvious on his new childrens CD, "I Want A Dog." 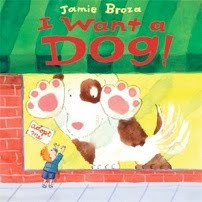 His first childrens' album in five years, tracks on "I Want A Dog" sound like they're drawn directly from musical theater. More precisely, a latin-themed production for kids - especially tracks like "Guatemala," featuring Broza's brother, David Broza. David is an Israeli superstar and sings in Spanish and plays classical guitar on the track.

I'll want to see how Ben reacts to the song, "New School." Although he is now happily settled at his current elementary school, he spent a difficult four-year period hopping from location to location. And as for "Birthday Parties Always End in Tears," while Ben has not cried at his own party, we'll seen plenty of breakdowns at these over-amped festivities. I'm nervous that we'll wind up playing "The No Game" with Ben after he hears that track. As it is, he hears a parade of "no" answers, sans music. Older kids will figure out what happened to the cat in "Where's Charlie" long before the "surprise ending." As for "Sisters," although my wife might choke up (with three older sisters), there's enough of an age difference of 20+ years that tempers any devastating mood swings.

Broza's first CD for children, “Bad Mood Mom and other Good Mood Songs,” made the Parents’ Choice Foundation’s list of the top 25 children’s CDs in the last 25 years. His follow-up CD, “My Daddy Is Scratchy” also won a Parents’ Choice Silver award as well as a NAPPA Gold award. He and his dad, Elliot Lawrence teamed up and co-wrote two musicals with Stan Berenstain, “The Berenstain Bears Save Christmas” and “The Berenstain Bears Onstage” which toured all over the United States.

Broza and his family rescued a dog, Dusty, from the North Shore Animal League and credit him as the inspiration for the new CD. In gratitude, he is donating 20 percent of the profits from this album to the organization, and hope it encourages others to adopt rescue animals. You could do worse for your family - musically or pet-wise.
Posted by MrJeff2000 at 11:29 AM No comments: