Daydreams - Adele
Daybreak - Barry Manilow
Can You Picture That? - Quazar and the Bamboozled
Say Hello to My Hippo - Todd McHatton
Mammal - They Might Be Giants
Valley Winter Song - Fountains Of Wayne
Stayin' Alive - Glee
If You Want to Fly - Steve Songs
Hi 5 Dance - Flannery Brothers

Some random stories this week.

My son completed his spring soccer program and I discuss what it's like to be three times as old as some of the teenage volunteers.

I flash back to my college years to recall how my lack of car knowledge cost me a trip to an amusement park, but taught others a valuable lesson.

And a footnote to my not-to-pleasant experience as a child when an adult bought ice cream for nine kids, but not for me.

Finally, the Cohen/Aubrey bit "Frank the Furrier" and whatever happened to the REAL man behind the parody, Fred Schwartz of Alexander's Department Stores.


Podcast Powered By Podbean
Posted by MrJeff2000 at 5:57 AM No comments:

Such a simple concept that often gets turned into an oxymoron.

This week’s podcast includes several examples of encounters with customer service. One ultimately had a happy ending, but involved an investment of time that gave it diminished returns. Another was a swift handling of an automated system, which I credit as a minor victory. Finally, the longest segment deals with the bureaucracy of collection agencies – voracious, tenacious, but unwavering in the face of (unprovable) truth.

Our comedy bit this time around is “Cholesterol.” Jon remembers the following, “For me that was a pretty straight up reaction to all those happy "bad food" association ads that were all over TV at the time – beef, eggs, milk, pork. Our soda parody, FLAB COLA, had a little of that too.”


Podcast Powered By Podbean
Posted by MrJeff2000 at 6:36 PM No comments:

Have Another Helping of Orange Sherbet Long story short, Orange Sherbet's new CD is the product of people helping their neighbors locate food grown regionally (within a 100-mile radius). A delectable concept has evolved (organically) into a movement and, as a tangent, launched a musical side dish. 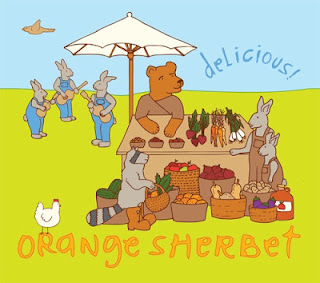 Orange Sherbet's Tamsen Fynn’s friends Sarah Klein and Jessica Prentice created The Local Foods Wheel with their friend, graphic designer Maggie Gosselin. The tool helps discovers local, seasonal food in the San Francisco Bay Area, the Upper Midwest, New York, and soon, Southern California. Tamsen spent hours at the kitchen table with cookbooks and a list of foods, on a quest for dishes that were mouthwatering and would lend themselves to musical treatment.

In the meantime, Orange Sherbet has recorded five CDs in the past decade-plus. The latest, DELICIOUS, features 17 culinary-inclined tracks.

Orange Sherbet raps through a whole menu of items in "Through the Seasons."

Farmers live in the San Francisco Bay
99 miles or less away
Locals all shop for food in town
Through the seasons all year round.

DELICIOUS is the concept and delightful is the conception. The CD offers a full plate of musical choices for school-aged children. And best of all, this Orange Sherbet is sugar-free! The CD will be available on May 15 through their website, Amazon, iTunes, and CD Baby.
Posted by MrJeff2000 at 9:40 AM No comments:

Came Out of a Lady - Rubblebucket
Slumber Party - In The Nick Of Time
I Love Food - The Not-Its!
The Golem - The Deedle Deedle Dees
Dream All Day - The Posies
I'm Just Thinkin' About What I'm Thinkin' About - Chip Taylor & the Grandkids
You Might Think - Weezer
Ruling Me - Weezer
I've Got a Brother - Nick Cope
I'm Still Standing - Glee

First Light - My Morning Jacket
The Monkeys are Breaking Out - Too Many Cookies
I Want You Back - Glee
I Believe In a Thing Called Love - The Darkness
Under African Skies - Paul Simon
First Warm Day - The Incredible Chandler Travis Catual
Owl and Pussycat - Heidi Swedberg
Lucky Day - Parker Bent
See the Seasons - The Rock Doves
Henry (Hudson), How Ya Gonna Find a Way? - The Deedle Deedle Dees

I celebrated another birthday this past week.

It's no big deal. I just consider the alternative.

In any case, here's some birthday stories, as well as a moderately-depressing tale from my childhood in New Jersey.

Enjoy it, as well as another Cohen/Aubrey bit from 1980s Queens College radio - DEAD COP.

You have been warned.

You Gotta Have Faith

Wild multi-colored costumes and set design. Elaborate staging. Psychedelic lyrics. Yup, it's the San Francisco music scene, even for children's music. The Sippy Cups were (and still are) a fixture and major attraction. The heart (or perhaps the "T" cup) was female singer "Sippy" Alison Faith Levy, who is now striking out on her own as a solo kindie artist. 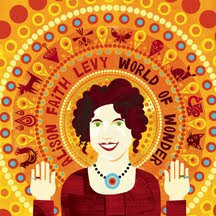 Levy is a musical jack-of-all-trades. She's been an adult solo artist, part of a band (The Loud Family), part of a duo (McCabe and Mrs. Miller), and part of a kid's group. With WORLD OF WONDER, she opens another chapter of her career.

Levy's CD starts as a rock album for kids. "Like a Spinning Top" and "Detours" will get your kids on their feet and jumping around. "I Love the Rain" would not be out of place on any Laurie Berkner CD. Next comes the Phil Spector/Wall of Sound version of "Itsy Bitsy Spider." Levy pays impressive homage to "And Then He Kissed Me" and a children's classic at the same time.

In the eye of the tornado

There's a gentle place to rest

And we're having tea and cakes

And watching boats sailing on the lake

And it's where I want to be

In the eye of the tornado is the place for me.


"Baby Anteater" and "I Had a Rooster" allow Levy to check off the animal songs that invariably seem to populate every children's CD that comes across my desk these days. I remain ambivalent but hey, the kids truly like them (the songs and the animals).

The title track ("World of Wonder") talks about the everyday miracles contained inside grains of sand and other small things (i.e., the world of wonder is right before your eyes). Not a bad sentiment when you want to train kids to be observant and spend time outside instead of playing videogames, watching TV, or naval-gazing.

The CD winds down with "One More Cupcake," a plea that every child invokes to stretch the day. Five more, four more, any amount to keep the fun happening. "It's never enough for me," Levy sings, and that's true for this too-short CD. It's a lot of fun and not just in a San Francisco way.

You can watch the video for "World of Wonder" here.

Rainbow Connection - Weezer Feat. Hayley Williams
I Want A Hippopotamus for Kwanzaa - The Jimmies
Our World - My Morning Jacket
I'm Your Moon - Jonathan Coulton
Nemeses - Jonathan Coulton
The Happy Vegan Thanksgiving Song - Todd McHatton
Someone Like You - Adele
Wrong Thing - The Hipwaders
What Katie Did - The Libertines
Kick Drum Heart - The Avett Brothers
Posted by MrJeff2000 at 4:01 PM No comments:

When We First Met - Hellogoodbye
So You Want To Be A Rock 'N' Roll Star - The Byrds
Under African Skies - Paul Simon
Ruling Me - Weezer
I Really Like You, Baby - ScribbleMonster
Rock Around WIth Ollie Vee - Buddy Holly
How Come You Never Go There - Feist
I Think I'm A Bunny - Todd McHatton
Glasses - Jonathan Coulton
A Daisy Through Concrete - Eels
Firefighter - Brian Vogan
Posted by MrJeff2000 at 4:14 PM No comments:

I did not intend the second episode of my podcast to be so hebraically themed.

But then I took my son to a conservative bat mitzvah and a week later, it was Passover.

Both reminded me of incidents from my Jewish past.

In any event, enjoy the stories.

Building of the Road - Caroline Herring
Palomino - Mates of State
The Wrath of Marcie - The Go! Team
You Are the Everything - Redbird
We Are Young - Glee
Everybody Let's Jump - Eloise the Great
Bunny Brown - Caspar Babypants
A Good Good Time - Nikolai Moderbacher
Making Silly Faces - In The Nick Of Time
Posted by MrJeff2000 at 4:01 PM No comments:

Grandma's Hands - Bill Withers
Go Out and Play - The Plants
Where You From? - The Baby Grands
Born to Be Loved (The Kitchen Tapes) - Lucinda Williams
Wanna Be Starting Something - Glee
Owl and Pussycat - Heidi Swedberg
Fire Of The Sun - Rocknoceros
D.A.N.C.E. - Justice
First Love - Adele
Slumber Party - In The Nick Of Time
Sugar Ant - Caspar Babypants
Posted by MrJeff2000 at 3:05 PM No comments:

Nogturne in C Minor - The Jimmies
Life's A Happy Song - The Muppets [Soundtrack]
Making Me Smile - Dean & Britta
In the Mood - Glenn Miller
Ah Ahsima - The Deedle Deedle Dees
The Amazing Baz Dance Remix - The Amazing Baz
We Just Won't Be Defeated - The Go! Team
Up Up Up - Givers
The Animal Life - NRBQ
Posted by MrJeff2000 at 4:00 PM No comments:

Walking Tall - Lyle Lovett
My Uncle, the Ant - Duke Otherwise
Reminds Me Of You - LMFAO
Tamacun - Rodrigo y Gabriela
Why Is Dad So Mad? - The Board of Education
Horse and Buggy - Kindercastle
Under a Cloud - Bangles
Friday Night - The Del Fuegos
Cough Syrup - Glee
Cocoanut Candy - Didi Pop
Posted by MrJeff2000 at 4:10 PM No comments:

MrJeff2000 Explains It All "Opening Day"

It may work, it may not work.

This is episode 1 - It talks about major league baseball and Opening Day.

I talk about a true story about a late season game at Shea Stadium with legendary third baseman Elliot Maddox.