Dream - Blue Sky Riders
Those Mysteries - Sparks
When I Get Little - Dog On Fleas
Sliver - Nirvana
River of Blood - Deedle Deedle Dees
We Got The Beat - Glee
Someone's Gonna Break Your Heart - Fountains Of Wayne
Music Is the Medicine - Derek Miller
Walk Of Life - Ben Rudnick
Posted by MrJeff2000 at 3:56 PM No comments:

Building of the Road - Caroline Herring
Wake Up Clarinet - Oran Etkin
Sing Your Own Song - John Wesley Harding
What Are We Gonna Do? - Dramarama
Roundy Round - Monty Harper
Type A Prayer - Alchemystics
Baby (Feat. Ludacris) - Justin Bieber
Dream All Day - The Posies
Somewhere - Glee
Not Too Young for a Song - Dan Bern
Posted by MrJeff2000 at 3:57 PM 1 comment:

Every Day Is A Good Day to Dream

Ah, the glory of childhood. When you can truly believe that "any dream is possible."

Then again, when you're five, all it takes to become a cowboy is a hat, a badge, and a bandana.

To become a doctor, you need one of dad's long, white shirts and a tongue depressor.

And to become a musician, all you need is an instrument. 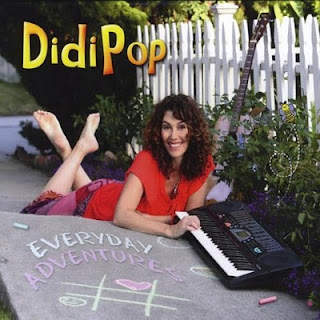 A children's piano teacher for more than 20 years, Deborah's passion for music turned a new corner after the birth of her daughter (at age 43). With 35 stamps on her passport, Deborah has played and taught music in such exotic locals as Bali, Montreal, Laos, Turkey, Belize, Tahiti, Morocco and Malaysia, in addition to performances in L.A. clubs like The House of Blues and McCabe's. A 2009 trip to Maui with family provided the inspiration and ambiance for most of the songs on her first CD, "DidiPop Goes to Hawaii."

On November 1, DidoPop releases her second CD, "Everyday Adventures," which presents 15 original songs for the junior set. I've yet to receive a childrens' CD from a California-based artist that does not include (at least) one Beach Boys-inspired song, and this one is no exception. "Feed the Pet" gives sweet, harmonic instructions about animal care. And kids get an amusing lesson in sitting still from "Tush on the Cush."

Deborah started writing childrens songs a decade ago for a TV project (The DidiPop Show) but didn't consider recording them until the birth of her daughter Delilah in 2005. Hannah followed two years later and the process developed organically. Now her kids provide background vocals and inspiration. Mostly, they provide the dreams, as children are wont to do.

And as her song insists on the new CD, "Any dream is possible." "Everyday Adventures" is a whimsical, fast-moving collection that's over way too soon.

Why - Steve Weeks
Mister Rabbit - Casper Babypants
Grandmom's House - Recess Monkey
Slumber Party - In The Nick Of Time
I Love Food - The Not-Its!
Born On the Bayou - Etta James
New Shoes - Paolo Nutini
So You Want To Be A Rock 'N' Roll Star - The Byrds
We Got The Beat - Glee
Daydreams - Adele
Posted by MrJeff2000 at 3:55 PM No comments:

Renee & Jeremy are releasing a holiday single entitled "Sunny Christmas." You can stream this or one of their other songs through this link.


After springing onto the children's music scene in 2007, Renee & Jeremy gained an international following after their animated video for "It's A Big World" went viral.

To date, more than one million kids and their parents have watched the clip.

Renee & Jeremy now look to share own special brand of holiday cheer to their fans both young and old with "Sunny Christmas," the first holiday track they have ever released to radio.

For the more immediate holiday, John Jeffrey Hodges has released a song about the universal message of Halloween - I WANT MORE CANDY.

John released a kid’s album in late 2009, "KiddyDittys, A Kid’s Album for Adults," and is working on songs for upcoming CDs.

Listen to the song here:

DidiPop has released a video for her Halloween song, GOBLINS:

Summertime - Ella Fitzgerald
The Time (The Dirty Bit) - Black Eyed Peas
Autograph - Sick of Sarah
Ole´ - Pearl Jam
I Got A New Friend - Ben Rudnick
Worms - Dog On Fleas
Things Behind the Sun - Nick Drake
Wondered What'd It Be Like - Stan Ridgway & Pietra Wexstun
Out Here On My Own - Glee
Octopus - Artichoke
Posted by MrJeff2000 at 3:57 PM No comments:

It's Ska To Be Good

Which is, produce kids music.

Well, if the ska punk has kids.

Since 1996, Mike Park has run Asian Man Records out of his garage. A former member of Skankin' Pickle (for whom he both played the saxophone and sang), Mike donned his "kindie music" cap after the birth of his kids. 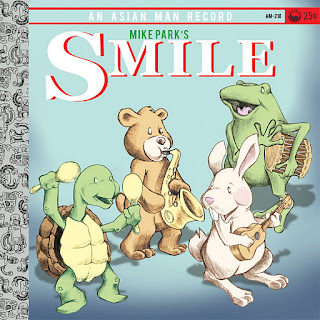 Looking for an upbeat primer to ska for your kids? Then Mike's CD, SMILE, fits the bill quite nicely. And for audiophiles, there is even a vinyl release available.

SMILE is everything you expect in a standard children's CD - songs about crossing the street ("When the Light Turns Red You Stop"), eating healthy ("Apples Are My Favorite"), and making music ("I Love to Play My Saxophone"). But there's an added layer of ska that you don't get with, say, Dan Zanes.

Mike's goals for Asian Man are simple – put out quality music at affordable prices and to be politically involved in the awareness of peace and unity. He was the force behind 1998's "Ska Against Racism" tour. The tour promoted awareness about racism and raised money for anti-racism organizations such as the Museum of Tolerance.

Laudable goals, accessible themes, danceable music. When you put it all together, you just have to SMILE.

SMILE is reasonably priced ($8) through Asian Man Records. The CD is also on sale at Amazon, but for twice the price.
Posted by MrJeff2000 at 9:35 AM No comments:

The City Grew Up Around Her - Caroline Herring
It's Not Unusual - Glee
Walking Wires - Radical Dads
Just the Way You Are - Bruno Mars
Growl Growl - Deedle Deedle Dees
Celebration - They Might Be Giants
Mmmmm - Crash Test Dummies
don't like change - Brady Rymer
I Think I'm A Bunny - Todd McHatton
Grandmom's House - Recess Monkey
Posted by MrJeff2000 at 3:59 PM No comments:

Daybreak - Barry Manilow
Wake Up Clarinet - Oran Etkin
Gump - Weird Al Yankovic
Drum! - The Deedle Deedle Dees
Song of the Passaic - Fountains of Wayne
Open My Eyes - Bangles
Baby (Feat. Ludacris) - Justin Bieber
Shoo Fly - Don't Bother Me - Sweet Honey In the Rock
What Are We Gonna Do? - Dramarama
Happy - Dog on Fleas
Science Is Real - They Might Be Giants
Last Song - The Hipwaders
Posted by MrJeff2000 at 3:43 PM No comments:

Why - Steve Weeks
Sing Your Own Song - John Wesley Harding
I Shall Sing - Grenadilla
Wimoweh - Joanie Leeds & The Nightlights
I'll Be Waiting - Adele
Section 12 (Hold Me Now) - The Polyphonic Spree
Eggs - Trachtenburg Family Slideshow Players
Under a Cloud - Bangles
Wrong Thing - The Hipwaders
Posted by MrJeff2000 at 3:54 PM No comments:

Set Me On Fire - Spirits and the Melchizedek Children
8 Is A Number - Board of Education
Hey Hey Hey - Michael Franti & Spearhead
Everything Is Music To Me - Jonathan Samson
Hero - Okee-Dokee Brothers
Candlelight - Maccabeats
Party Rock Anthem - LMFAO ft. Lauren Bennett & GoonRock
Around The World - Glee
Super Sonic Rocket Bike - The Bazillions
Posted by MrJeff2000 at 4:06 PM No comments:

Phony Calls - Weird Al Yankovic
Get Me Out Of Here - Bill Harley
Your Room's A Mess - Rock Daddy Rock
Dream All Day - The Posies
It's Raining Again - Supertramp
Mister Rabbit - Casper Babypants
It's Not Unusual - Glee
Somebody To Love - Justin Bieber
Because I Said So - Keller Williams
A Good Good Time - Nikolai Moderbacher
Posted by MrJeff2000 at 3:57 PM No comments: