With Linked Arms – Cat Doorman
Tell Me A Lie – One Direction
Danceology – The Dirty Sock Funtime Band
Show Me What You're Feeling – Tom Chapin
Out Of The Box – The Bazillions
When I Grow Up – Lucky Diaz And The Family Jam Band
Is This a Joke? – Billy Kelly and the Blah Blah Blahs
Lightning Bolt – Pearl Jam
What's My Name? – Rihanna Feat. Drake
A Dog Named Bruce – Ralph's World

Dessert Island – Recess Monkey
In A Timeout Now – Randy Kaplan
Why is the sky blue?  – Nick Cope
Immigrant Song – Led Zeppelin
Did You Feed My Cow? – Ella Jenkins
Yes And No – Caspar Babypants
Up In Cat's Room – David Heatley
Washing Machine – Milkshake
Heart Attack – One Direction
Give Me Back My Hat – Bill Harley And Keith Munslow
Posted by MrJeff2000 at 4:01 PM No comments:

"Duck" the Dynasty, Cheer the Boo-Boo

A bunch of my right-wing "friends" on Facebook have leaped on the "Support Our Racist" bandwagon for Phil Robertson. They point out that even the racist Governor of Louisiana, Bobby Jindal and known racist Sarah Palin are supporting longtime, outspoken racist Phil Robertson.

One of their main tactics is to point out that left-wing people supported Martin Bashir, when he alluded to moronic remarks by Sarah Palin and suggested someone should poop in her mouth. He quit before MSNBC received any intense pressure to fire him. Classy move. 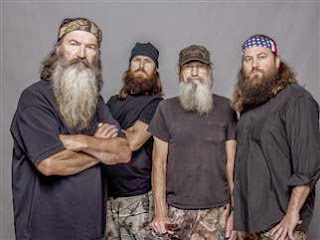 The comparison is apples to oranges. Bashir is an educated Brit who made one stupid, on-air remark. Rather than engage a cause celebre, he quit. Backwoods entrepreneur Phil Robertson simply voiced an opinion he's had for decades: Homosexuals are bad. It ain't Biblical.

Back to Bashir...Um, he didn't say anything racist. He made a poop joke. Not the best, not the worst, not the most obvious. But when the chips were down, he decided to take a break.

I do not despise A&E, the network that broadcasts Duck Dynasty. Nor do I detest whatever network airs HONEY BOO-BOO. I've never watched one second of either show, nor do I intend to. But millions of people like to watch "train wreck" television; viewing the antics of morons is intensely pleasurable. Otherwise COPS wouldn't have lasted 20+ seasons and remain a top program in syndication.

If anything, the producers of HONEY BOO-BOO should send Phil Robertson a fruit basket. Duck Dynasty has made BOO-BOO irrelevant. WGAS about a morbidly obese woman and her hillbilly clan when you have swamp people and their business? But if A&E doesn't blink in their showdown with the Robertsons, then BOO-BOO regains the dubious crown as "Queen of the Lowest Common Denominator."

If anyone is truly suffering from this incident, it's Martin Bashir. Forever until the end of time, if you enter his name in Google, the system will auto-fill either "racist," "poop," or "Phil Robertson."  The latter's 15 minutes should soon be over, replaced by a legless, armless cigarette roller or a rapping Pinhead. America needs its morons freshly hewn. Bashir will land on his feet somewhere, out of the media swampland, and return to making erudite commentary. Robertson? I'm happy to let him clean his guns and make his duck calls and say whatever he wants, which is another of his rights as an American. Just not on my TV.
Posted by MrJeff2000 at 6:59 AM No comments:

Swinging on a Star – Zak Morgan
Everybody's Going Out To Play – Billy Kelly and the Blah Blah Blahs
Blink Of An Eye – Frances England
Are We There Yet?  – Joanie Leeds And The Nightlights
Frog  – Artichoke
Raised by Trolls – Key Wilde and Mr. Clarke
Liza Jane  – Jr. Madness
Strong – One Direction
Sunshine  – The Twigs
Beach Ball – Recess Monkey
Give Me Back My Hat – Bill Harley And Keith Munslow
The Flying Fox – Davy Andrews
Posted by MrJeff2000 at 3:51 PM No comments:

Who Killed Poor Robin? – Red Yarn
We Are All One Kind – Jambo
Nonsense  – Davy Andrews
Copycat – Bill Harley And Keith Munslow
Wander 'Round the World – Key Wilde and Mr. Clarke
So Many Words – Cat Doorman
If I Had a Rainbow – Haley Bonar
Midnight Memories – One Direction
I Got a Great Idea – The Twigs
A Dog Named Bruce – Ralph's World
I'm So Glad – Alex & The Kaleidoscope Band
Posted by MrJeff2000 at 3:45 PM No comments:

Being sisters is tough. Being twin sisters in even tougher.

Located in Los Angeles (Linda Good) and Charlottesville, Virgina (Laura Good), the Twigs did not get on the same page, musically, until there was an ocean of distance between them. After high school, Linda went to London to study music and exchanged tapes of song ideas with her sister. Eventually (long story short) they evolved into The Twigs. 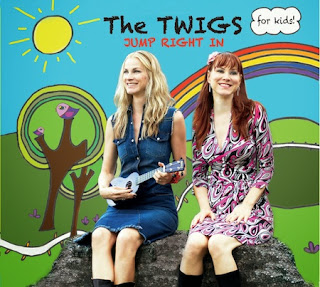 The duo recorded several contemporary CDs, before embarking on an album for kids. They would ask Laura's three-year-old daughter Alena (a featured performer) for suggestions. They would tailor the songs around her concepts, which turned into many of the tracks on JUMP RIGHT IN.

Undeniably a children's CD, JUMP RIGHT IN plays with harmonies and instruments and even attempts "Frere Jacques," as if Raffi's version wasn't definitive for the young 'uns. Past that song, there's the uplifting title track, as well as the ukelele-tinged "I Got A Great Idea":

C'mon let's go outside all day
We can build a fort or write a play
Climb a tree or plant some seeds
I've got a great idea that's coming true.

Other aural highlights include "Sunshine," "Baby, Don't Cry," and "Blueberry Jam," the story of when peanut butter went to jail. The vocals were reminiscent of the East Coast-based Nields (Merissa and Katryna). The Twigs have a soft-rock sensibility (which comes from their early days listening to Bread, according to their bio) and are earnestly seeking to "expand" their audience by growing fans, literally. JUMP RIGHT IN is a quick (26 minutes) easy listen, perfect for car rides with a built-in "fade out" one-two punch of "Pretty Ponies" and "Time to Sleep." You can spend your time looking for other female vocalists who can harmonize so effortlessly. Or you can jump right in with the Twigs.

JUMP RIGHT IN is available from the Twigs website, Amazon, iTunes, and CDBABY.

Here is the video for the song "Baby Don't Cry":

Little Little Baby – The Harmonica Pocket
Me and My Brand New Haircut – Billy Kelly and the Blah Blah Blahs
Shine – Shine and the Moonbeams
You Are An Astronaut – Human-Tim + Robot-Tim
Let's Go – Joanie Leeds And The Nightlights
I Love U –  Josh And The Jamtones
Brave – Sara Bareilles
Taco Taco Tacos – Peelander-Z
Blue Underwear – Ethan Rossiter And The Jamberries
Playground – Astrograss
All Together Now – Caspar Babypants
Posted by MrJeff2000 at 7:03 PM No comments:

This week marked the publication of DAD CONFIDENTIAL, a novel I started in January, with copious illustrations by Robert Wallman, whom I met in high school in 1979. I asked Robert some basic questions so people could get a little insight into him and his process. 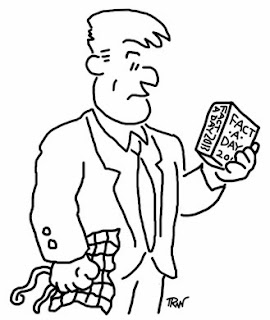 Why did you become an illustrator?
I drew well early on, and the encouragement of family and friends made it seem natural to pursue as a career. By college graduation I realized very few people really earn a living this way. So I also began doing pre-press print production, from paste-up and mechanicals transitioning to computer graphics, in order to stay afloat.

Where were some of your earliest creative outlets?
Throughout high school and college, I contributed cartoons to student publications and designed posters for shows. I studied character animation at the California Institute of the Arts, then switched to graphic design at the School of Visual Arts in NYC. While the animation study was brief, it greatly influenced my illustration skills.

Post-college, while doing print production for industries such as advertising, corporate communications, and textbook publishing, my illustration skills were known to co-workers, who would request personalized greeting cards and caricatures. Those occasionally led to job-related art projects. It was at one of those companies where I worked with Jeff, whom I'd originally met in our high school's health class.

What was your DAD CONFIDENTIAL work process? 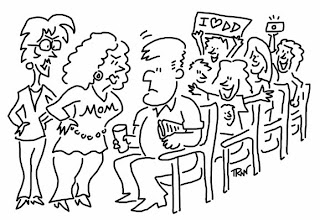 Having once contributed to Jeff's popular wrestling fanzine (and previously unfamiliar with that "world"), I was glad to join forces again on his ebook project. He would send me excerpts of chapters in progress, with suggestions for a few illustrations per each. At first, I'd scan rough sketches for refinement in Photoshop, until it became easier to draw everything onscreen, duping images, flipping things around, etc. Unlike more critical collaborators, Jeff OK'd most of my first drafts, in some instances even revising the text to reflect a particular art detail.

Do you have any other illustration projects in the works?
I don't want to be too specific before anything's finalized, but I'm creating graphics for a documentary, an online comedy show, a law firm's website, even a health(!) organization. And someday it might be fun to try creating a more fully illustrated graphic novel based on either an existing manuscript or one of my own composition.

DAD CONFIDENTIAL is available at Amazon, iTunes, Barnes & Noble, and Smashwords.
Posted by MrJeff2000 at 2:17 PM No comments:

Delicious – Orange Sherbert
Start Of The End – The Dirty Sock Funtime Band
I Love New York – Joanie Leeds And The Nightlights
I'm a Shark (I Rock, I Swim) – ScribbleMonster
Ice Cream Soup – Jambo
Monsters – Edukator, Jr.
Roar  – Katy Perry
Beach Ball – Recess Monkey
The Fox (What Does the Fox Say?) – Ylvis
Till There Was You  – Lucky Diaz And The Family Jam Band
The Plumbing Song – Weird Al Yankovic
Posted by MrJeff2000 at 3:46 PM No comments: