Teachers who make music. Where have I heard that concept before? It's practically a nationwide epidemic, although that might be the wrong word. I should probably say worldwide epidemic. It was only last month that I wrote about the Montana-based educators behind the Whizpops. And if you're into kindie music yet you don't know the backstory for the school teachers in Recess Monkey, please click on their link and come back in a few minutes. I'll wait. 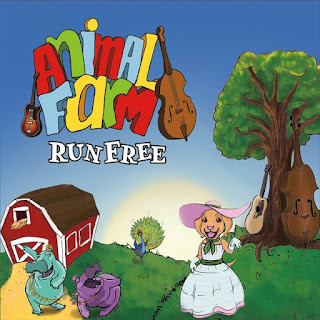 Now comes RUN FREE, the debut CD from Animal Farm. The band played live for several years in the Boston area, only to see founding member Seth Adams move to Chicago in 2012. Cofounder David Ladon found himself in the Windy City the following year, fortuitously allowing the band to reform, regroup, and re-strategize with new management. With savvy boardwork by renowned producer Mike Hagler (Wilco),  Animal Farm is finally ready to roam free range with its genre-jumping brand of kid's music.

Animal Farm (insert your own George Orwell joke here) uses RUN FREE to bring eight initial songs to the spotlight. "When Pigs Fly" is a power-pop ballad complete with conditions from the air traffic controller. There's a countrified "Vegetarian Spider," a South African/world music-infused "The Hippo Song," and they use the metaphor of physical growing pains for the snake-infested "Shed Your Skin":

I feel a certain kinship with Hagler, who worked as a parts manager at a car dealership before getting into music. With a day job at a software company, who knew that one day I would reviewing children's music at a prodigious clip? Many kindie acts find themselves in the same position – it starts as a side project or develops after putting together a simple act for a birthday party. it's fun, it's infectious, and to paraphrase the catchy Pringle's slogan, betcha can't do it just once.

Time will tell if distance will divide Animal Farm once more. Key Wilde and Mr. Clarke produced a stellar Animal Kingdom CD last year and numerous other artists circle the terrain. Geography works to their advantage, as I have yet to be inundated with CDs from other Chicago-area kindie musicians. You can play some samples for your kids here. Party down with your children like it's 1984 with Animal Farm (sorry, couldn't help myself).

Here is a live performance of the band playing their song, "Glitter Bug":