White Light - Wilco
Where Does The Sun Go At Night? - Dorothy Collins
Heart of the Country - Wings
We Are Going To Be Friends - The White Stripes
Green Teeth - The Zucchini Brothers
The Air That I Breathe - The Hollies
She Just Doesn't Get It - Yosi & the Superdads
Heart Songs - Weezer
Periodically Double Or Triple - Yo La Tengo
The Addams Family theme
Posted by MrJeff2000 at 4:23 PM No comments:

I Don't Need Anything But You - Dan Zanes & Friends
There Is No Away - Uncle Rock
All My Colors - Ralph's World
Everyone Loves to Dance - Aaron Nigel Smith
I Can't Wait for Summer - Eric Herman & the Invisible Band
You Are My Sunshine - Elizabeth Mitchell
Shake! - Flannery Brothers
The Channukah Medley - Gwendolyn and the Goodtime Gang
Picnic - Fresh Young Fellows
Mr. Sandman - Glenn Miller & the Andrews Sisters
Posted by MrJeff2000 at 4:43 PM No comments:

Trees - Dog on Fleas
Ride of the Valkyries - Richard Wagner
Back Off Boogaloo - Ringo Starr
Antmusic - Adam & the Ants
Rattle My Bones - The Suburbs
(I've Got a) Pet Dinosaur - Einstein's Monkey
Sara Bellum - Roger Day
Gimme Gimme Gimme - ABBA
Gravity - Robbert Bobbert and the Bubble Machine
What Do You Like More? - Robin Vaughn
Posted by MrJeff2000 at 12:50 PM No comments:

Wonder of Birds - Innocence Mission
Sleep Through The Static - Jack Johnson
Bein' a Kid - The Zucchini Brothers
I Feel Like Going Home - Yo La Tengo
Speed of Love - The Hipwaders
Look Through Any Window - The Hollies
Funky Monkey - Yosi & the Superdads
My Doorbell - The White Stripes
In The Mall - Weezer
That Thing You Do! - The Wonders
Posted by MrJeff2000 at 5:03 PM No comments:

Not Too Late - Norah Jones
Shuffle Off To Buffalo - The New Broadway Cast Recording
Hit Me With Your Rhythm Stick - Ian Dury & The Blockheads
Your Blue Door - The Honeydogs
Dance This Mess Around - The B-52s
I Can't Let Go - The Hollies
Stand Up to the Bully - The Hipwaders
Photograph - Nickelback
The Numbers Song - Mr. Ray
The Bird That You Can't See - Apples in Stereo
Posted by MrJeff2000 at 4:18 PM No comments:

Cricket Little Cricket - Steve Weeks
Savoy Truffle - They Might Be Giants
Superman Theme - John Williams
How Do I Live Without You - Lee Ann Rimes
If It's True - Yo La Tengo
I'll Stand By You - Pretenders
Man On The Moon - R.E.M.
On A Carousel - The Hollies
One Step Beyond - Madness
Picnic - Fresh Young Fellows
Posted by MrJeff2000 at 3:47 PM No comments:

All Your Secrets - Yo La Tengo
Everyone Loves to Dance - Aaron Nigel Smith
My Doorbell - The White Stripes
Stronger Than Me - Amy Winehouse
Stand and Deliver - Adam & the Ants
One Day Soon - The Sippy Cups
That Thing You Do! - The Wonders
Chicken Noodle Soup - Yosi
In The Mall - Weezer
Every Day's a Holiday With You - The Jimmies
Posted by MrJeff2000 at 4:24 PM No comments:

Wings of An Eagle - Ziggy Marley
White Light - Wilco
Bein' a Kid - The Zucchini Brothers
Speed of Love - The Hipwaders
Have Fun - Secret Agent 23 Skidoo
Say It Ain't So - Weezer
The Summer - Yo La Tengo
Seven is the New Fourteen - Sippy Cups
Fell In Love With A Girl - The White Stripes
I Didn't Know - Chris Hamilton
Eight Chanukah Nights - Charlie Jaffe
Posted by MrJeff2000 at 4:34 PM No comments:

If Mama Had Four Hands - Sarah Lee Guthrie & Family
Everyone Asked About You - Bob McGrath
The Race Is On Again - Yo La Tengo
5 O'Clock World - Dave Clark Five
Tie A Yellow Ribbon - Tony Orlando & Dawn
No No No Cha Cha Cha - Brave Combo
You're Never Fully Dressed Without A Smile - Dan Zanes & Friends
The Uncomfortable Truth - Nneka
I'll Come Running - Brian Eno
What Are You Like - Indigo Girls
Fun, Fun, Fun - Beach Boys
Posted by MrJeff2000 at 3:58 PM No comments:

It Makes You Feel Good - Renee & Jeremy
There Is No Away - Uncle Rock
Silly Bob - La-La-Lisa
Eep Oop Ork - The Jetsons
Frenzy - Dean Jones
I-C-E C-R-E-A-M - Telephone Company
The Climb - Miley Cyrus
My Brother The Ape - They Might Be Giants
Let It All Hang Out - Weezer
My Doorbell - The White Stripes
Boogie Woogie Bugle Boy - Puppini Sisters
Nicky Nicky Knock - Dream Jam Band
Posted by MrJeff2000 at 4:07 PM No comments:

Messages in Spirituality Through Allegories

The music of Lisa Weyerhauser's Big Green Alligator conveys a number of larger issues – spirituality, dark emotions, even death. Since these are uncomfortable topics for many parents, I'll put an advisory right at the top. Clicking through to the host Web site might immediately polarize visitors, with a quotation from the Psalms. But that's expected, coming from a Pastor's wife. Lisa wears many hats as a worship leader, licensed counselor, and a professor of adolescent psychology with master's degrees in both religion and counseling psychology. 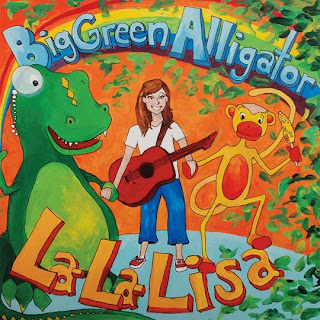 "I put a lot of questions into the lyrics of Big Green Alligator – 'Where did we come from, Where are we going, and How did you find your way to me?' – because I wanted kids to feel like they could ask this character anything," Lisa said. "I believe it is essential for kids to learn to express their feelings at early ages. I want them to know that if they are shy, it's OK. If they feel sad about something, it's OK. There is a freedom in learning to correctly express emotions. If kids can learn how to do that when they are young, it will be more natural for them to do as they get older."

Putting aside religious connotations, the 18 songs on the disc cover the standard little kids topics – relationships with your parents, friends, and family, learning, coping with the world around you. But Lisa (a.k.a La-La-Lisa) provides a framework that is clear and continual:

Oh there are some days

that you could just cry

Or at least wish that you could die

But on those days remember that

God He still loves you

And that's a fact

Generally electric/acoustic, Lisa sticks with mostly country arrangements, but sticks a little auto-tune into "The Countdown Song." And a sweet "Goodnight" song that wraps up the CD.

Big Green Alligator is Lisa's first foray into kid's music, but her nickname (La-La-Lisa) was earned a long time ago. "I started singing at youth camps when I was 16," she said. "And to this day, I have 30-somethings come up to me in the grocery store and ask, 'Aren't you La-La Lisa?' That name has stuck even after all these years." Lisa wrote and performed all 18 songs on the project, and has dedicated a portion of the proceeds of the sales of the CD to Teen Mother Choices International. One of the goals of TMCint is to keep all the girls off of welfare and to date, 100 percent of the girls who have participated in the program have graduated from school and found jobs to support themselves.

If you don't mind some mild proselytizing, Big Green Alligator delivers a combination of common sense lessons along with an introduction to an awakening in one's sense of religious principles. Keep that in mind if you don't have problems separating music from its (intended or unstated) message.

Smile - Ky-Mani Marley
All About Bob - Ralph's World
She's Like a Rainbow - Rolling Stones
Bouncing Off the Walls - Mr. Leebot
Tripping Down the Freeway - Weezer
Roam - The B-52s
Sara Bellum - Roger Day
Meet Me Halfway - The Black Eyed Peas
Everyone Everywhere - Baze And His Silly Friends
Posted by MrJeff2000 at 2:18 PM No comments:

Brush Brush Brush - Of Montreal
Three Little Birds - Renee & Jeremy
Can't Stop - Red Hot Chili Peppers
Kiss Me On the Bus - The Replacements
The Mighty Worm - Ralph's World
No Nothing - Randy Kaplan
Oh My My - Ringo Starr
SOS (Rescue Me) - Rihanna
Roy G. Biv - They Might Be Giants
Fort - Recess Monkey
They All Asked For You - Rani Arbo & Daisy Mayhem
Posted by MrJeff2000 at 4:54 PM No comments:

Dear God - Sarah MacLachlan
Summer Today - Egg
Raise the Brain - Miz B
Bonobo Joe & the Voodoo Queen - The Hipwaders
I'm Yours - Jason Mraz
Everyone Loves to Dance - Aaron Nigel Smith
Weight Of The World - Ringo Starr
Come Play! - Eric Herman & the Invisible Band
See and Be Scene - The Hard Lessons
(If You're Wondering If I Want You To) I Want You To - Weezer
My Imagination - Baze And His Silly Friends
Posted by MrJeff2000 at 4:02 PM No comments:

Home - David Tobocman
Don't Dream It's Over - Sixpence None the Richer
I Don't Need Anything But You - Dan Zanes & Friends
Hey Soul Sister - Train
(There's a) Party In The Playroom - Einstein's Monkey
Collide - Howie Day
Can't Stop Partying - Weezer
If Not For You - George Harrison
Oliver's Army - Elvis Costello
Wait Your Turn - Mr. Ray
Posted by MrJeff2000 at 1:05 PM No comments:

Having slept on it, some Oscar thoughts:

1. Host must be Billy Crystal (who gets it).
1a. If Billy says no, go to someone with guts. Ben Stiller or Sasha Baron Cohen. Even Jack Black.

2. When Sean Penn says he is not an Academy member – and he’s a two-time winner and considered “young Hollywood,” you know the membership needs to be opened up. No, don’t send an application to Miley Cyrus. But how about Kristin Stewart and Zac Efron? They’ve at least worked with people like Jodie Foster, Richard Linklater and Greg Motolla.

3. Give up the orchestra. I know “it’s Hollywood’s big night,” but all of that stuff appeals to an ever-decreasing, aging demographic. Tweens are not going to stay tuned after Miley and Lautner give out ONE award. But if you have Fall Out Boy or Good Charlotte as the house band, playing famous movie themes, at least it would pique their curiosity.

4. No presenters over the age of 50. Wouldn’t that be something? And there will be enough winners in that age range.

5. Dress casual neat. Designers, other homosexuals, and E! Television will have a stroke, but nothing turns off younger audiences like a room full of old dudes and dames in formal wear. And seeing teen idols trying to “act old” only creeps them out.

6. Give the producers a “hard out.” You never hear about the Tony Awards running into overtime. If they had to make the judgment call and cut the five-minute dance number OR lose Best Picture being announced live (and not on the Internet post-show), what do you think they would choose?
Posted by MrJeff2000 at 7:09 AM No comments:

How Clouds Are Formed - Tom Glazer
Keep Me In Your Heart - Warren Zevon
Autumn Sweater - Yo La Tengo
(I've Got a) Pet Dinosaur - Einstein's Monkey
This Is Your Body - Baze And His Silly Friends
Coconut Woman - Karl Zero & THE Wailers
Back Off Boogaloo - Ringo Starr
The Way I Walk - Robert Gordon
Six Months in a Leaky Boat - Split Enz
Si Se Puede - Deedle Deedle Dees
Posted by MrJeff2000 at 4:11 PM No comments: 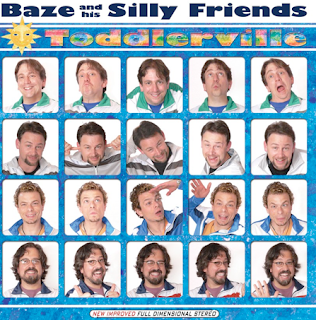 You can become one of Baze's silly friends by joining them at Myspace.
Posted by MrJeff2000 at 4:54 PM No comments: