After TOY STORY 3, some movie music selections from Ben.
Posted by MrJeff2000 at 4:32 PM No comments:

Ben continues his "off" week before camp with 44 minutes of mixed fun.
Posted by MrJeff2000 at 5:30 PM No comments:

Why Do I Have A Shadow? - Dorothy Collins
I'll Come Running - Brian Eno
Stratus And Cumulus - Tom Glazer
Let It All Hang Out - Weezer
Daniel In The Den - Dan Zanes
8 Is A Number - Board of Education
Sugarcube - Yo La Tengo
No Surprise - Daughtry
Two Princes - Spin Doctors
Roam - The B-52s
Say It Isn't So - Hall and Oates
Please Don't Stop the Music - Rihanna

First day of school vacation playlist.
Posted by MrJeff2000 at 6:47 PM No comments: 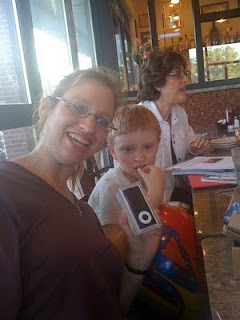 Mom got a nano for her birthday!

Jewish Girls (At the Matzoh Ball) - The LeeVees
Whistle For Willie - Randy Kaplan
I Like It Like That - Dave Clark Five
It's Summertime - Flaming Lips
Reading Makes Me Want to Dance Out Loud - Monty Harper
Clocks - Coldplay & Buena Vista Social Club
Photograph - Nickelback
It Must Be Summer - Fountains Of Wayne
Rattle My Bones - The Suburbs
I Like To Move It - Sacha Baron Cohen
Posted by MrJeff2000 at 6:21 PM No comments:

I did a double-take and thought Ben had selected two Hall and Oates songs for Wednesday. Then I saw that it's the Gwen Stefani version of "Rich Girl."
Posted by MrJeff2000 at 3:58 PM No comments:

An eclectic selection (not a lot of Ben's choices, but he lost his playlist selection from school behavior today).
Posted by MrJeff2000 at 4:24 PM No comments:

Ben starts his last week of school with some nice selections and dance songs.
Posted by MrJeff2000 at 4:06 PM No comments:

The Hebrew-Speaking Bear - Randy Kaplan
I'd Like To Teach The World To Sing - New Seekers
Starman - Killian Mansfield
The Summer - Yo La Tengo
Growl Growl - Deedle Deedle Dees
This Is Your Body - Baze And His Silly Friends
With Or Without You - U2
One Of Us - Joan Osborne
Springtime, It's My Favorite - Billy Kelly and the Blah Blah Blahs
Chocolate Ice Cream - King Pajama
Marshmallow Farm - Recess Monkey

Hello Hello (Good Morning) - Dustin Type
Home - David Tobocman
My Name Is No - Starfish
All Around the Kitchen - Pete Seeger
Everyone Everywhere - Baze And His Silly Friends
Here To Fall - Yo La Tengo
Mr. Tambourine Man - The Hollies
Sunglasses - Recess Monkey
Dance This Mess Around - The B-52s
Be Yourself - Grenadilla
Honest Kid - Princess Katie and Racer Steve

Sorry that the links to musicians have disappeared after a week, but we got all caught up in stuff this week. Sigh.
Posted by MrJeff2000 at 3:55 PM No comments:

A mini-Kindiefest reunion set with Clementown, 23 Skidoo, and Keith Munslow.
Posted by MrJeff2000 at 4:04 PM No comments:

If You Want To Sing Out, Sing Out - Rani Arbo & Daisy Mayhem
Please and Thank You - Princess Katie and Racer Steve
I Feel Like Going Home - Yo La Tengo
(There's a) Party In The Playroom - Einstein's Monkey
Motion, Motion Everywhere - Tom Glazer & Dottie Evans
Roy G. Biv - They Might Be Giants
Sound of Sunshine - Michael Franti & Spearhead
Sunday Morning - GMG Jam
Mexican Radio - Wall of Voodoo
The Birds Have A Language - Marais & Miranda 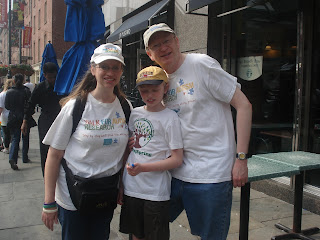 Not the best family shot, but us at the Autism Walk in Manhattan on Sunday.

A set of "comfort" songs for Ben, after an exhausting Sunday of traveling into Manhattan and then to Suffolk County for a surprise birthday party.
Posted by MrJeff2000 at 4:09 PM No comments:

Plus the Spin Doctors (currently on career hiatus) as well.
Posted by MrJeff2000 at 4:13 PM No comments:

Back to the future with robot tim, Jetsons, and Space Cadets!
Posted by MrJeff2000 at 12:09 PM No comments:

Sunny spring songs take the lead this morning, with Paul and the Jam Band, as well as Milkshake and Eric. Oh, and TWO Roger Day songs!
Posted by MrJeff2000 at 4:07 PM No comments:

A mixed folksy bag as we enter Tuesday.
Posted by MrJeff2000 at 3:52 PM No comments:

Back to basics as Ben starts the school week.
Posted by MrJeff2000 at 3:58 PM No comments:

Don't Monkey With the Funk

When I think of Seattle, I think of Recess Monkey. Pre-1990, the first thing that came to mind was rain. For the next decade, I thought about grunge (Nirvana, Pearl Jam, STP). Now that I have a child, I equate Seattle with their foremost childrens music group, Recess Monkey. 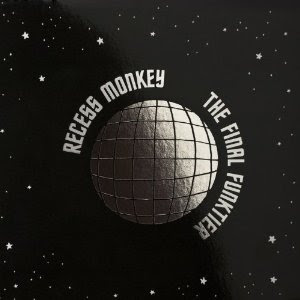 The Monkeymen (Jack Forman, Daron Henry, and Andrew Holloway) release their sixth album, The Final Funktier on June 15. It took a lot of rare tracks and live recordings for Nirvana to hit the six album mark. And they've shown growth and maturity over the past several albums.

"Final Funktier" takes the form of a space mission, from launch to exploration of new dimensions (such as "The Galax Sea"). But it still addresses the themes that mean the most to children: sibling rivalry, messy rooms, and getting older. "Booster Seat" uses the space concept as a metaphor for auto travel:


I'm out in space. Blast from the Earth without a trace.
Right off our driveway up to a star
I know someday I'm going far.

The Recess trio know their audience well - as teachers, they met while working at a Seattle school and turned a grad school project into the band's first album "Welcome to Recess Monkey Town" (2005). Over the past half-decade, they have continued to produce melodic and well-reviewed CDs that have built a solid nationwide following through the Internet, word of mouth, SiriusXM Kids Place, and radio shows.

"Final Funktier" features a host of guest performers from the Seattle kids music scene - the Not-Its, Harmonica Pocket, Chris Ballew (Caspar Babypants), Eric Ode, and Johnny Bregar, as well as Chris Wiser from the Sugar Free Allstars, Gustafer Yellowgold, and more. You get a CD that's also a festival.

The band delves into some interesting concepts with their funk. "Ukulalien" introduces the ukulele to hip beats. And "Beat-Box-a-Robot" is kind of self-explanatory. And the CD ends with the uplifting "One Tiny Light:"

You spring to life so easily,
You are the seed of the galaxy,
and you shine light inside of me, shine right into me.

How about that? An interplanetary lullaby. Works for me.
Posted by MrJeff2000 at 5:42 PM No comments:

Green Teeth - The Zucchini Brothers
I Have a Little Dreidel - Yosi & the Superdads
The Greatest Love of All - Whitney Houston
My Brain - Mose Allison
Buddy Holly's Got the Hiccups - Uncle Rock
Fishing Blues - Taj Mahal
Boom Boom Pow - The Black Eyed Peas
Hummingbird - Wilco
Roy G. Biv - They Might Be Giants
Mexican Radio - Wall of Voodoo
Be Part of the Band - The Verve Pipe

Hey, Ben is the one who loves the Spare the Rock promo, for some reason. So there it is.
Posted by MrJeff2000 at 4:24 PM No comments:

Selections from Kindiefest reappear in this morning's playlist.

Plus some swinging Joe Jackson and Supersuckers.
Posted by MrJeff2000 at 4:16 PM No comments: