Beach House – The Good Ms Padgett
Boo! – Trout Fishing In America
Unwind – Secret Agent 23 Skidoo
You Can Do This – Hullabaloo
Up In Cat's Room – David Heatley
Tacky – Weird Al Yankovic
Half Of Me – Rihanna
H.B.D., Dude! – Mista Cookie Jar & the Chocolate Chips
Listen To What The Man Said – Owl City
Posted by MrJeff2000 at 2:08 PM No comments:

If Red Tastes Like Strawberry – The Whirlygigs
Pendulum – Pearl Jam
Be a Little Angel – Mista Cookie Jar & The Chocolate Chips
Banana Pudding – Sugar Free Allstars
My Favorite Sneakers – In The Nick Of Time
Here Comes Peter Cottontail – The Hipwaders
Change Your Ticket – One Direction
My Heart Is Open – Maroon 5 Feat. Gwen Stefani
Posted by MrJeff2000 at 3:55 PM No comments:

In All Of The World – Papa Crow
In The Group  – Tom Chapin
Bigga Bagga – Key Wilde and Mr. Clarke
Mystery – Dean Jones
We All Want Love – Rihanna
Time Machine – Eric Herman
Sugar – Maroon 5
No Control – One Direction
Posted by MrJeff2000 at 4:01 PM No comments:

Another Good Year  – Lori Henriques
Gettin' My Ya Ya's Out  – Brady Rymer & The Little Band That Could
Mothership – Mr. Saxophone
Everything I Didn't Say  – 5 Seconds of Summer
If I Could Fly  – Riff Rockit
Don't – Ed Sheeran
Bonsai  – Billy Kelly and the Blah Blah Blahs
This Little Light Of Mine – Eric Herman And The Invisible Band
Posted by MrJeff2000 at 3:56 PM No comments:

Summer Day – Stacey Peasley
If I Could Fly – Riff Rockit
Manatee – The Whizpops!
Ice Cream Girl  – Brady Rymer & The Little Band That Could
Love Runs Out – OneRepublic
Best Friend – In The Nick Of Time
Crazy Mountain Road – Eric Herman And The Invisible Band
Up In Cat's Room – David Heatley
Posted by MrJeff2000 at 3:50 PM No comments:

Lucky Penny – The Whirlygigs
Smile in My Heart – Suzi Shelton
Kings & Queens – The Hipwaders
Dancing Bear – Bari Koral Family Rock Band
Danceology – The Dirty Sock Funtime Band
Great Day – The Not-Its!
My Sister Kissed Her Boyfriend – Trout Fishing In America
Got To Get You Into My Life  – Perry Farrell
H-U-L-L-A-B-A-L-O-O – Hullabaloo
Posted by MrJeff2000 at 4:13 PM No comments:

The Girl With the Squirrel in Her Hat – Caspar Babypants
Wake Up – The Neville Brothers
Snaggletooth – Dean Jones
Gettin' My Ya Ya's Out – Brady Rymer & The Little Band That Could
Everybody Out There – Paul McCartney
The Hustle – Van McCoy
Back To The Shack – Weezer
Bluebird – Corinne Bailey Rae
Posted by MrJeff2000 at 4:23 PM No comments:

O'Halloran Attracts Kids Along the Outback

Just when you think you've covered every corner of children's music, along comes someone with another perspective or culture. If you think "Waltzing Matilda" and the Wiggles are the only Australian children's music exports, you're missing an entire continent's worth of performers. Michael O'Halloran has been entertaining children down under for more than 30 years. Since, as you might expect, his own children were born.

With THE LITTLE BLUE BUS, Michael is moving his music around the world for American audiences. My four year old asked, "What's a billabong?" and "What's a dingo?" over the course of the first listening. So on one level, we know that he was listening intently. 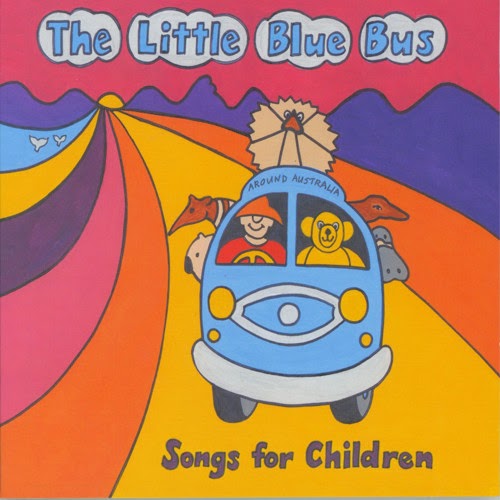 Our older son was paying attention as well. At first hearing, he remarked that the vocals sounded similar to Key Wilde and Mr. Clarke. If you need a frame of reference, that's a British accent versus an Australian accent. At 13 he's all about the comparisons, having mostly outgrown the nature of the genre.

I like to draw attention to special guest artists who appear on various children's music CDs. I would be remiss to not include Matty Green and Tracy McNeil (a Canadian, so this recording is truly inter-continental).

THE LITTLE BLUE BUS chronicles a trek across the Australian countryside, from "The Gulf of Carpentaria" through "Hanging Rock Creek" to "Go To Bryon." It's gentle and gentlemanly music for kids – think Nick Cope for another comparison.

As 2015 begins, I'm going to attempt to be more accepting of world music. Michael O'Halloran is world away from me. I could see him fitting right onto the next Putumayo collection of Aussie kids tunes. For now, he's driving his own course along the outback and he seeks to bring your children along for the ride.

THE LITTLE BLUE BUS is available from Amazon and iTunes.
Posted by MrJeff2000 at 11:54 AM No comments: