Everything Is Music To Me - Jonathan Samson
The Thing That Helps Me Get Through - Michael Franti & Spearhead
Wheels On the Bus - Primate Fiasco
Battleship Chains - Hindu Love Gods
Sabotage - Beastie Boys
Do The Turnout - Deedle Deedle Dees
Pancakes! - Bramble Jam
Shake! - Flannery Brothers

Ben must have siblings on the brain - he chose Flannery and Okee-Dokee Brother, the Cocteau Twins, and even Bazillions.
Posted by MrJeff2000 at 4:56 PM No comments:

Baby's Getting Up - Casper Babypants
I Wanna Be An Action Figure - Daddy A Go Go
5 O'Clock World - Dave Clark Five
Blueberry Pie - Dog on Fleas
Big Heart - Frances England
Keep Your Hands To Yourself - Georgia Satellites
Trading Squirrels - Recess Monkey
Browns Ferry Blues - Robbie Fulks
What Do You Like More? - Robin Vaughn
All My Friends Are Different - The Salteens
I Like It That Way - Sweet Honey in the Rock
Posted by MrJeff2000 at 5:28 PM No comments:

Welcome Matthew Leo Cohen, who will start his own playlists around 2015.
Posted by MrJeff2000 at 5:36 AM No comments:

No new little brother yet. Please check back later this week.
Posted by MrJeff2000 at 4:42 PM No comments:

As he made his playlist for tomorrow morning, Ben asked, "Who's on Twitter?"
Posted by MrJeff2000 at 3:57 PM No comments:

Congratulations to all the 2010 Fids and Kamily Award winners!
Posted by MrJeff2000 at 3:54 PM No comments:

Some stunning new debuts for Friday.
Posted by MrJeff2000 at 5:15 PM No comments:

Ben's coming brother looms large in the days ahead.
Posted by MrJeff2000 at 3:42 PM No comments:

Another sick day playlist for Ben.
Posted by MrJeff2000 at 3:57 PM No comments:

It Makes You Feel Good - Renee & Jeremy
White Light - Wilco
When Life Gives Me Lemons - The Boy Least Likely To
Are You Gonna Eat That? - Keith Munslow
The Climb - Miley Cyrus
Run Away - Weezer
Surfing USA - Beach Boys
Pee Keeps Our Insides Clean - Pete Yorn
I Like It That Way - Sweet Honey in the Rock
Percy on Pluto - The Nields
Have You Ever - Brandi Carlile

Free Your Mind - En Vogue
Where You From? - The Baby Grands
Teenage Dream - Katy Perry
Things You Want - The Hipwaders
Pink Piggie Polka Pancake Picnic - Ernie & Neal
Somebody To Love - Justin Bieber
Crow - Joe's Backyard Band
I Like It Like That - Dave Clark Five
I Go Swimming - Peter Gabriel
Be Yourself - Grenadilla
The Final Countdown - Europe

Ben recovering from a cold with these selections.
Posted by MrJeff2000 at 3:51 PM No comments:

Let's meet the Muppets on the Muppet Show tonight.
Posted by MrJeff2000 at 4:04 PM No comments:

The Beastie Boys make their debut!
Posted by MrJeff2000 at 5:12 PM No comments:

Reasons to Own Your Own "Mind Of My Own"

Too often, children's music gets pigeonholed. I've written before that if I never hear another "going for a ride in the car" song, it'll be too soon. It doesn't take a mastermind to figure out that kids have more to think about. Frances England figures it out for you on her new CD, "Mind Of My Own." 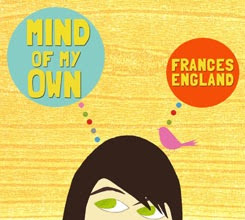 The CD sounds like a time capsule from the 1970s, with tunes such as "Jacques Cousteau" and "Bicycle." Frances dissects the power of a child's imagination in "Red Balloon":


Yet Frances England, kindie musician, was born after the birth of her first son, Liam. She contributed songs to his preschool fundraiser, which turned into her debut CD, "Fascinating Creatures" in 2007. The CD grew an Internet following and was the sole recording to win the 2007 Oppenheim Platinum Music Award. Her second CD, "Family Tree," followed thereafter and won numerous awards of its own.

"Mind Of My Own" contains 14 new songs with a gentle, creative attitude. Frances accentuates the positive, such as "Cookies and Milk" (which features guitarwork from Doug Snyder of the Jellydots):


A good indication of Frances' appeal comes from experience in our own home. Prior to reviewing the CD, I pulled a few songs to our iTunes directory. Ben quickly identified the tunes ("It's new Frances England") and asked when I would be finished with the review, so he could add it to the pile of CDs for play in the car stereo system. He has looked at other CDs I've received and simply put them back on the desk. But "Mind of My Own" held his interest. And I even feel bad for waiting this long to compose my thoughts, when it's one of the best children's CDs of the year. Well, I'm done. I liked it. And now we'll all hear it again in the car very soon.

This Friday night, November 5, Frances will be premiering "Mind Of My Own" on Sirius XM Radio's Kids Place Live. She will play the entire CD, talk about the themes of the songs, and take listeners for a walk through San Francisco’s Haight Ashbury neighborhood. Frances speaks with a couple of musicians who played on the album to talk about their instruments, inspirations, and share some stories about making music together. The program will be broadcast nationally four times this weekend at the following times:

Fun fact about Ben's playlist musician of the day: Taylor Swift is twice Ben's age.
Posted by MrJeff2000 at 4:31 PM No comments: