All Star – Andrew & Polly
Even When.... – Ratboy Jr.
Have You Ever Been Real – Dean Jones
I Love The Night – Gustafer Yellowgold
I Spy – Ants Ants Ants
Orphans – Coldplay
Taco Tuesday – The Lucky Band
Posted by MrJeff2000 at 3:56 PM No comments:

Clown Shoes – Ratboy Jr.
Fly Like A Bird – Dean Jones
Give You a Call – Jack Forman
Lost And Loving It – Kepi Ghoulie
Loving & Kind – Aaron Nigel Smith
Stars – Ants Ants Ants
Thank You For Being You – Brady Rymer and the Little Band That Could
Posted by MrJeff2000 at 4:06 PM No comments:

Nashville musician, illustrator, and children's book author Elliott Park celebrates Valentine's Day with a charming duet, "Love Will See Us Through," featuring eight-year-old Lilah Benjamin. With so many divisive forces in the world today, Park hones in on the pure, unadulterated bond between parents and offspring. 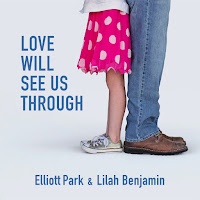 There's no overt politicizing and it's a world of difference between what a child sees as overwhelming compared to a parent. But Park brings it all into focus with a simple piano arrangement that instantly makes listeners recall Randy Newman's "You've Got a Friend In Me." In that sense, "Love Will See Us Through" is a notable companion piece.

You can look for Elliott Park's debut children's CD, JUST BE, from his website and Amazon. You can stream "Love Will See Us Through," (out February 14), on Soundcloud:

Finally – Franz Ferdinand
Inside I Shine – Danny Weinkauf
It's A Wonderful Life – Kepi Ghoulie
Shine It Up – Caspar Babypants
Village d'Ãtoile – Dog On Fleas
What Kind Of Fruit – Dean Jones
With a Little Help From My Friends – Brady Rymer and the Little Band That Could
Posted by MrJeff2000 at 3:53 PM No comments:

Backstroke Raptor – Story Pirates
Ducky Is The Name Of My Bike – Caspar Babypants
People Watching – Dean Jones
Stumble Into You – Jack Forman
White Whale – Kepi Ghoulie
Word Association – Dog On Fleas
You Can Get It If You Really Want – Brady Rymer and the Little Band That Could
Posted by MrJeff2000 at 4:21 PM No comments:

Anything Can Be A Hat – Ratboy Jr.
Handle With Care – Like Father Like Son
Harmony With You – Jack Forman
I'm an Optimist – Dog On Fleas
Who In The Circus Is Me? – Caspar Babypants
Who, What, When, Where, Why – The Bazillions
You Do You – Brady Rymer and the Little Band That Could
Posted by MrJeff2000 at 4:58 PM 1 comment:

Buenos Dias – The Lucky Band
Doppelganger – Dog On Fleas
Even When.... – Ratboy Jr.
Everything Has A Song – Caspar Babypants
#Goals – Jack Forman
Inkpot – Kepi Ghoulie
Summer's Here – The Bazillions
Posted by MrJeff2000 at 4:19 PM No comments:

It looks like the year 2020 will see a bunch of returns and re-inventions, as well as an upswing of singles releases. Secret Agent 23 Skidoo has promised to have monthly EPs (!) coming, for a total of more than 60 tracks by the end of the year. But for now, here are the first two selections. 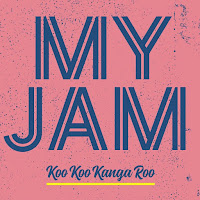 The answer to the hypothetical question, "Do you need to have children to make extraordinary music for children?" used to be "Justin Roberts." The Chicago-based performer and his band, The Not Ready for Naptime Players, garnered three Grammy nominations during their long-tenured career. Very soon Justin's new CD, WILD LIFE, will arrive, celebrating his marriage and subsequent introduction to parenthood. In the meantime, we have the first single, "Heart Like A Door," and it sounds like fatherhood agrees with him. Take a listen here and you'll agree with me.

Those two fellows from Koo Koo Kanga Roo are at it again. By that, I mean they've released another single from an upcoming release, date to be determined. The song, "My Jam," is gathering airplay at Harlem Globetrotters games, so kids are getting jiggy (and jelly) with it. "We are excited to get to partner with Koo Koo Kanga Roo as we're big fans of the work they do to help kids be active," commented Globetrotters rep Hammer Harrison. "We hope that when kids and families watch the video they are inspired to get up and get moving."   You can grab "My Jam" here and watch for the video next week.

Bryan and Neil from Koo Koo Kanga Roo will bring "My Jam" and their other newest songs “Glitter” and “Hot Sauce” to California audiences starting today. As always, they will get fans of all ages up and dancing along at several venues around the Golden State:
These shows are open to all ages. Details and advance tickets (unless otherwise noted, $15 general admission; $40 VIP admission) are available now at http://kookookangaroo.com/shows
Posted by MrJeff2000 at 6:40 AM No comments: 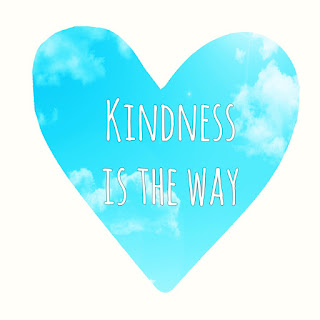 Mista Cookie Jar's new song "Kindness Is the Way" falls somewhere between rap and piano jazz. CJ refers to this style as "soul jambalaya," on a track that symbolically drops on Dr. Martin Luther King Day, as the Senate gears up for a game of political Rock 'Em Sock 'Em Robots over the Trump presidency.

The world can be a cold place but a friendly smile or warm embrace can make all the difference. The Cookie maestro takes his upbeat hip-hop lyrics and delivers them over a tinkling piano and midtempo drumbeat:

For our love love love to elevate,
we gotta do whatever it takes.
To the top top top
you bet we'll escalate
each day, everyday.

Buenos Dias – The Lucky Band
Ducky Is The Name Of My Bike – Caspar Babypants
Fly Like A Bird – Dean Jones
Handle With Care – Like Father Like Son
In My Nintendo – Jack Forman
Lazy Boy – Franz Ferdinand
Posted by MrJeff2000 at 4:54 PM No comments:

Non-secular children's music walks a fine line between entertainment and enlightenment. Every Christmas song ever recorded (with the exception of "Last Christmas") qualifies as non-secular. However kids of all religions happily sing along when December rolls around. If you're in the market for story-oriented modern interpretations of classic religious tales, (Brendan) Parker and (Erick) Alexander have released "All Of Us: Bible Songs for Everyone." 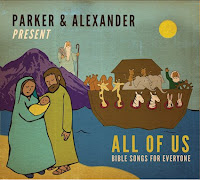 The duo are also responsible for a multitude of amusing non-secular children's CDs recorded as Spaghetti Eddie, over the past several years. "All Of Us" covers creation to the Nativity to the stories of Noah and Jonah (and the whale). They have branded their new project under their own names to disengage from the more generic Spaghetti Eddie brand. The songs are bright and filled with uplifting sentiment, perfect for certain developing religious sensibilities. You can order "All Of Us" from Parker & Alexander's website.

What if Seth Rogen decided to record children's music? I have a feeling it would sound (and look) something like Jesse Jukebox (otherwise known as Jesse Freidberg). A children's music educator and performer, Jesse teaches kids how to play instruments on his website, as well as tells stories, and acts as a font of unassuming entertainment.

Jesse's third CD, AWESOME! drops next week. The title track is now available as a video, featuring sign language from his deaf friend Jaison Anderson. They recount a large number of things that are, well, awesome. Here, watch for yourself:

All Star – Andrew & Polly
Backstroke Raptor – Story Pirates
Inside I Shine – Danny Weinkauf
That's My Style – The Bazillions
Under the Big Umbrella – Brady Rymer and the Little Band That Could
Village d'Ãtoile – Dog On Fleas
Who In The Circus Is Me? – Caspar Babypants
Posted by MrJeff2000 at 4:20 PM No comments:

Dozen Good Reasons – Danny Weinkauf
I've Got An Apple Pie In My Bookbag – Lisa Loeb and Kid Pan Alley
In My Nintendo – Jack Forman
It's a Miracle – Dog On Fleas
Noodles And Butter – Caspar Babypants
White Whale – Kepi Ghoulie
With a Little Help From My Friends – Brady Rymer and the Little Band That Could
Posted by MrJeff2000 at 4:10 PM No comments: