Kind of a Beach Boys theme today, with a cover song and two similar titles.
Posted by MrJeff2000 at 4:34 PM No comments:

Bushel And A Peck - Rani Arbo & Daisy Mayhem
Doing It Right - The Go! Team
Keep It Green - Bill Harley
Kiss On My List - Hall and Oates
Loser Like Me - Glee
My Name Is No - Starfish
Scootdootdoodlydoo - Billy Kelly
Song of the Passaic - Fountains of Wayne
Starman - Killian Mansfield
Willy Won't - Debbie and Friends
Posted by MrJeff2000 at 4:00 PM No comments:

Banana Pancakes - Jack Johnson
Mexican Hat Dance - Herb Alpert & the Tijuana Brass
We Could Be Pen Pals (w/Molly Ledford) - Billy Kelly
Somewhere Only We Know - Glee
Only Girl (In The World) - Rihanna
One Nation Under a Groove - Funkadelic
Get Me Out Of Here - Bill Harley
just bein with you - Brady Rymer
Michael Jackson Medley - Primate Fiasco
Posted by MrJeff2000 at 4:21 PM No comments:

Lemonade - Butterflyfish
Change My Luck - The Not-Its!
You're Not The Bossa Nova Me - Daddy A Go-Go
I Like It That Way - Sweet Honey in the Rock
I Gotta Feeling - The Black Eyed Peas
Things Behind the Sun - Nick Drake
Percy on Pluto - The Nields
A Fire Burns For Freedom - Ziggy Marley
Gee Angel - Sugar
TV - Music For Aardvarks Presents David Weinstone
Posted by MrJeff2000 at 1:23 PM No comments:

Don't Worry About the Government - Talking Heads
Up the Junction - They Might Be Giants
It's Hard To Be A Kid - Daddy A Go-Go
Are You Gonna Eat That? - Keith Munslow
Dog Days Are Over - Florence And The Machine
Growl Growl - Deedle Deedle Dees
Outside Inside - The Pop-Ups
Opposite Day - Secret Agent 23 Skidoo
My Name Is No - Starfish
Posted by MrJeff2000 at 4:20 PM No comments:

Daddy A Go Go Has That MoJo

He's Got the Beat, Daddy-O

I knew I liked Daddy A Go Go's new CD when I couldn't stop my leg from stomping along to the beat. And it really a generational thing, but when was the last time a kindie artist worked Steve McQueen and the Backstreet Boys into a song, and didn't care if the little ones got the references? And that's just the first song, "I Wanna Be An Action Figure." 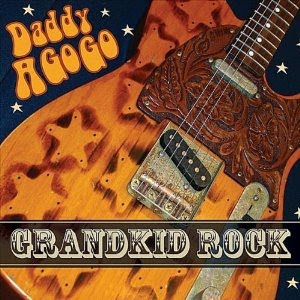 One-man rock band John Boydston became a childrens's music proponent the old-fashioned way: he fell into it. After deciding to give up his job as a television news producer, John started a new career as a stay-at-home dad to his two sons, then both under the age of six. Since adults still need some “me” time, he ended up making rock and roll records for his kids.

What began in 1998 has turned into eight CDs, including the new disc, "Grandkid Rock," a remixed collection of 16 of John's favorite tunes from his previous releases. As stated eariler, he is definitely not afraid to rock. There have been kid's CDs that almost put me to sleep - not a good thing, especially if I'm behind the wheel. No chance of that happening with this disc!

When determining the theme of the CD, John envisioned an aged guitar to symbolize modern grandparents. Why not a classic image, like a grandfather clock? It's a cliché. "That's from another era and doesn't represent today's grandparents at all," John said. "How about a cool looking guitar that's slightly aged, worn, and actually better looking for the wear and tear?" Not to mention the improved sound.

Ben has been practicing Ponchielli's "Dance of the Hours" on the piano. Daddy A Go Go strips the Allan Sherman parody "Hello Muddah, Hello Fadduh" down to its barest elements for a rave-up. "Adventures in Carpool" chronicles the misadventures of a frantic dad en route to dropping off the kids on time for school. As the lyrics go:

There's traffic as far as we can see.

Dad makes a wild turn, watch out for that tree.

I'm glad we're in the Expedition.

I hope that cop will listen.

On Earth Day (Friday, April 22nd 2011), Baze And His Silly Friends are proud to premiere and share their newest song, A Little Green!

The song teaches children that if we all do a little bit everyday, we all can make a big difference and change the world.

Why Do I Have A Shadow? - Dorothy Collins
I Just Want to Have Fun - Of Montreal
Get Funky - Teenage Fanclub
Dreamer - Supertramp
Joy - NoMeansNo
Big Kite - Flannery Brothers
Keep It Green - Bill Harley
Shpilkas - Bunny Clogs
Starman - Golden Smog
Just Happy To Be Me - ScribbleMonster
Mr. Fancy Pants - Jonathan Coulton
California Dreaming - Mamas and the Papas
Posted by MrJeff2000 at 3:55 PM No comments:

Joanie Leeds has been singing since she was two years old. While her career has taken her into the adult music realm, Joanie kept in touch with her inner kindie spirit. Her fourth children's CD, What A Zoo!, invigorates that concept. 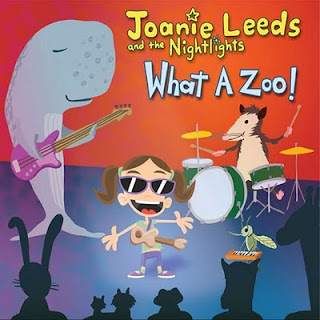 While growing up on the mean streets of Miami, Florida, Joanie developed a love and appreciation for the outdoors. "Whether I was relaxing by the ocean with my mom, camping or hiking with my dad, or taking class trips to the Florida Everglades, nature and beauty surrounded me," Joanie says in the liner notes. Her brother Jonathan became an environmentalist. Inspired by his actions, she spent several years writing a collection of animal tunes. "I hope the content also encompasses and encourages a larger message, for both children and adults," she adds.

The menagerie starts with "All the Animals," an accountant's dream that tracks the appendages of various creatures. Listeners then travel to the waterfront for "Mosquitoes" and a hiphop take on "Froggy Went A'Courtin'" featuring kidhop funkmaster Secret Agent 23 Skidoo.

Joanie stays in the water for "Big Blue Whale" ("The biggest animal to ever live on the Earth"), "Happy as a Clam," and "See Cow." She ventures onto higher ground and covers Phish on "Possum," as well as "Pony Boy" and "Wimoweh" (otherwise known as "The Lion Sleeps Tonight"). Two ballads, "Hummingbird" and "My Butterfly" are pleasant but cover the same melodic ground. It's a tribute to the animal kingdom and Joanie Leeds (and her band, the Nightlights) trek from the mountains to the seas to make sure no reptile or amphibian is shorted in the journey.

I'm interested in what's coming next from Joanie - a kindie "supergroup" project in the vein of "We Are the World." Joanie and superproducer Tor Hyams are recording a new version of his song, "A World of Happiness" with a bevy of artists including herself, Frances England, Caspar Babypants, Billy Kelly, Billy Jonas, Ralph Covert, Recess Monkey, and many more. Fingers are crossed and hoping for a great success on their part.
Posted by MrJeff2000 at 7:50 AM No comments:

Free Your Mind - En Vogue
Shake It - Michael Franti & Spearhead Feat. Lady Saw
Get Me Out Of Here - Bill Harley
La La La (I Love You) - Egg
don't like change - Brady Rymer
Colors - John & Mark
Are You Gonna Eat That? - Keith Munslow
I Want to Hold Your Ear - ScribbleMonster
Lots of Latkes - Shira Kline
Posted by MrJeff2000 at 5:25 PM No comments:

The Cat Came Back - Monty Harper
TV - Music For Aardvarks Presents David Weinstone
Birds Fly Away - Theresa Andersson
Dream City - Free Energy
Say It Loudly - The Not-Its!
My Body - Young the Giant
Wimoweh - Joanie Leeds & The Nightlights
Be Thankful For What You Got - Yo La Tengo
Look Through Any Window - The Hollies
Posted by MrJeff2000 at 4:22 PM No comments:

House Party in the Family Garden

Pennsylvania's Billy Kelly makes kids music sound informal. In fact, his new album, "The Family Garden," sounds like a one-take recording, down to the informal "I'm a little out of tune" banter between the songs. Kelly also asks smaller-than-life questions, such as "Why Is the Moon Following Me?" and answers with "does it want an english muffin?" 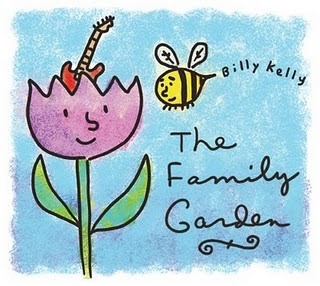 Kelly started recording childrens music in 2009. Yes, a mere two years ago and suddenly he's up to his third full CD. But then again, there's a deceptive simplicity in a song like "Scootdootdoodlydoo," which sounds like something from a 1920s radio program and "The Happy Happy Whistling Song." And he's brought along some accomplished friends, including Lunch Money's Molly Ledford on, "We Could Be Pen Pals."

Kelly chose to record "The Family Garden" with minimal overdubbing, giving the album a "just-recorded" feel, similar to Dan Zanes. And Kelly does not seem as concerned as other childrens recording artists are, in creating an album as a complete thought - with an intro, rollicking middle section, and a quieting down period. As if children need to be told to "calm down" after hearing a CD. Instead, Kelly delivers white rap ("Coney Island Rap Jam Thing") into a cover of "Rock Lobster," the original "The Invention Of The Straw" and its fictitious history lesson, then ends with the equally-uptempo "It's A Wonderful Life."

We can only hope that Billy Kelly has many silly thoughts left in his head that he's looking forward to sharing in the coming years.
Posted by MrJeff2000 at 8:48 AM No comments: