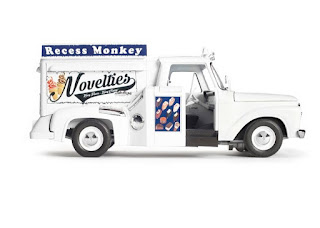 How do I describe Recess Monkey? Imagine if three guys with day jobs as school teachers elected to use their musical abilities outside the classroom as entertainers? Hence the concept of "recess." Performing for the merriment of children? Hence the "monkey." What about a little wink to let the adults in the room know that the music is enjoyable for all ages – well, I remember some of the looks I got when I told people the name of my kids' favorite band. "Rhesus Monkey?" "Oh never mind..."

Every summer for the past decade, Recess Monkey has added to possibly the strongest discography in the burgeoning genre of children's music. Somewhere along the way, we jumped on board for the ride, much like Nemo's dad Marlin in "Finding Nemo" when he met Crush the turtle and rode the East Australian Current. Coincidence alert! "Finding Dory" comes out June 17 as well.

How does NOVELTIES stack up? For a CD with an ice cream truck on the cover, it's remarkably warm and approachable. The one/two power punch of "Every Flavor" and "Sweaty Yeti" opens the disc, segueing from ice cream (753 choices) to imaginary creatures. Family dance anthem "Piggyback" gives the band a chance to rap over a raging horn section about fun times that result in a piggyback ride from dad. "Mustaches of the World" brings a rarely-heard electric guitar into the mix for facial hair so fierce it can be seen from traffic helicopters. "Time to Make the Donuts" (video below) delves into a specific confectionary obsession:

Realize that it's getting rough
When one dozen is never enough
So you head on back down to the donut store.
Here I am as sure as rain
Put the steaming donuts in the window pane
I bake them all and then I bake some more.

The 14 tracks on NOVELTIES traverse making music ("The Band Next Door") to toys ("Wind Up Robot") to fantasy ("Lovestruck Unicorn") to pets ("Chasing My Tail" and "Smitten for Kitten"). The brother singing "Snowball" plots warm weather revenge after a winter sneak attack. Recess Monkey long ago began to brand each new CD with a "theme." The originality and scope on NOVELTIES demonstrates the band's playful nature and serious professional chops, under the production aegis of fellow Kindiependent Collective member Johnny Bregar.

I've had mixed feelings about the Amazon Music program incorporating kindie artists such as the Pop-Ups. Following a promising start, there was a lengthy lull and frankly, I believed there was a possibility we wouldn't hear another release. But signing Recess Monkey is like snaring the brass ring on the carousel at the carnival. Amazon Music is making a clear statement that they are committed to children's music. Recess Monkey and its simian siren song have taken us far from home (to Longwood Gardens in Pennsylvania, actually). Next month we'll trek to Yonkers or the Bronx (or both!) to see the fellows ply their groovy trade. The future looks bright for these NOVELTIES, indeed.

Here is the brand-spanking new video for "Time to Make the Donuts":