What does childhood sound like? The duo behind Play Date think they've cracked the code. Of course, being a child, living like a child, and thinking like a child are vastly different animals. But Play Date believe they've tamed all said beasts, with the lyrical tale of "Stevie the Fox" kicking off their second CD, WE ALL SHINE. 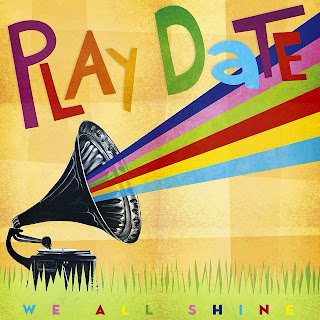 Mike Park's Fun Fun Records has cultivated a treasure trove of performers, including Kepi Ghoulie to Koo Koo Kangaroo. But Play Date remains the most accessible, boisterous, and engaging act on its roster. The title track and chorus simply state the message that Greg Attonito and Shanti Wintergate seek to convey:

We are all a part of a great humanity
Working all together to make life for you and me
Planet Earth is our home in this great big galaxy
We all shine, we all shine, like the stars

What act other than Play Date is going to intersperse public service announcements for broccoli, bananas, carrots, and apples in the middle of their CD? Rapper P.O.S. shows up to funk out on "Ninja Pajamas" and hail the power of imagination (also the title of the band's first CD).

Former punker Attonito has pivoted from punk to youth music. His band The Bouncing Souls hail from New Brunswick, New Jersey, a stone's throw from my childhood nabe in Somerset. His partner in merriment, Shanti Wintergate has a lengthy performance career that includes three separate runs on the Vans Warped Tours (2004, 2006, and 2008). Together, they have delivered 40-plus minutes of gentle "get up, here we go" guitar-based rock for the smaller set.

WE ALL SHINE is available on July 24 from the band's website, Fun Fun Records, iTunes, and Amazon.

Alastair Moock has gotten over cancer. Well, his daughter is in remission and he has moved to greener (and happier) pastures with his upcoming CD, ALL KINDS OF YOU AND ME. It's a tribute of sorts to the epic and much-loved landmark 1972 album FREE TO BE...YOU AND ME. “Free To Be was a huge album for me and so many other kids of the 70s," Moock says. "Forty years later, it felt like the right time both to pay tribute to that amazing project and to try to push beyond some of the limitations of its era.”

For a special video preview of what's to come, visit his YouTube channel. And here's a look at "It Takes All Kinds," the first song from the album, coming June 19.

Amnesia – 5 Seconds of Summer
Coral Reef – The Whizpops!
The Girl With the Squirrel in Her Hat – Caspar Babypants
Maps – Maroon 5
My Own Detective – Tom Chapin
No More Lonely Nights – The Airborne Toxic Event
The Start of Things  – Alison Faith Levy
Stay in the Pool – Jason Didner And The Jungle Gym Jam
Posted by MrJeff2000 at 4:02 PM No comments:

Racing All Around This World: Africa

I got a lot done at work this week and I credit ALL AROUND THIS WORLD: AFRICA. There's nothing that gets your blood racing and your spirits soaring then tribal drum beats, catchy rhythms, and clapping hands. 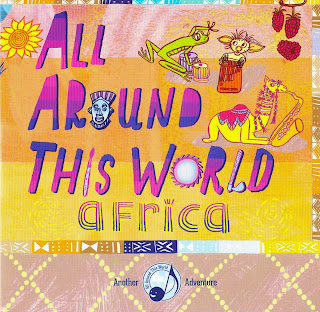 I've never been a big proponent of world music. My attitude is it's there, I know it's there, and I'm fine with it being there. Just don't put it right in my face. But due to a series of escalated work deadlines, I looked past my own musical limitations and played the 32 tracks (on two CDs) all the way through, then started again. Then I brought it home for the kids, who were being pokey at dinner, and played it for them. And they zipped through the rest of the meal.

The music travels in all directions (Africa is a big continent), from Cape Verde to Madagascar, including Guinea, Ghana, Nigeria, the Congo and South Africa. Going beyond the music, there's a new "Explore Everywhere" curriculum that weaves the songs with videos, maps, cultural information, and activity ideas that can be utilized for classrooms. The program runs through June 21 – incidentally the release date for the CDs to consumers.

The project was co-produced by Brooklyn's own Amon Drum, whose Hook Studio in Red Hook, Brooklyn, describes itself as, “Purveyors of fine sound from Brooklyn to Bamako and Beyond.” How appropriate that such a collection required a steadying hand from half a world away.

ALL AROUND THIS WORLD: AFRICA is available through their web site on June 21.
Posted by MrJeff2000 at 7:42 AM No comments:

Labels: All Around This World, Childrens Music, World Music

Da Vinci – Weezer
Extraordinary – Eric Herman And The Invisible Band
It Suits You – Gustafer Yellowgold
Life In Color – OneRepublic
Rainbow Tunnel – Alison Faith Levy
She Looks So Perfect – 5 Seconds of Summer
Size Of The Problem – Tom Chapin
Together We Can Fly –  Danny Weinkauf
Posted by MrJeff2000 at 1:53 PM No comments:

In the style of Hope Harris and Lizza Connor, Here Comes Trouble is a poppy ensemble from Gaithersburg, Maryland that espouse a mixture of pop, jazz, and hip hop. Their debut CD, GOO ON MY SHOE, tells you what you need to know – what's going on? Is it funky and fun? Is it relatable for kids? 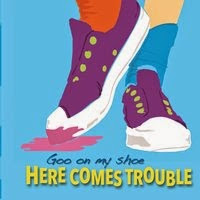 Kelly Donohue and Jon Babu have been together since 1991 although Here Comes Trouble only surfaced in 2010. Their kids had no knowledge of their extensive musical pasts (joint degree programs at Tufts University and New England Conservatory, to start with). Establishing an ensemble and investing in music they could share with their family and community was a way to reach out and reach in at the same time.

Small fry will like selections such as "I Want Dessert" and "Watermelon Felon." Adults will appreciate the sudden launch into a reworded "It's Raining Men" during the title track. It seemed a little incongruous as we sat listening at the family dinner table, but since our kids possibly have never heard (or know the meaning) of the original tune, it went over fine.

GOO ON MY SHOE is available June 9 from CDBABY, Amazon, and iTunes.

Brooklyn's own The Pop-Ups have launched a video webcast series on their YouTube channel! See animated versions of such songs as "Robot Dance," Magic Glove," and the self-explanatory "What's That Smell?"

The spirited duo (Jason Rabinowitz and Jacob Stein) have been bubbling with energy and creativity since 2010 (what is it about that year?). Their entertaining and fast-paced tunes bristle with positive vibes and messages that thankfully don't make parents bristle.

Finally, where does the time go? I meant to drop a mention of Mista Cookie Jar's latest song of the month BEFORE Mother's Day but did not get around to it. Apologies. But in some cultures, every day is Mother's Day, so let's take solace in that empty mea culpa. 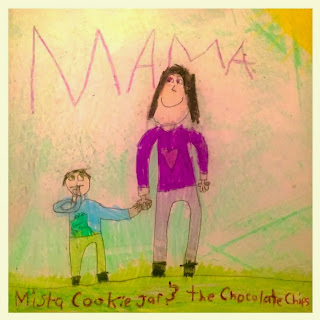 For May, CJ (Mista Jar to you) has released "Mama," an ode to, well, his mom. It's the story of how his parents migrated from the Philippines to America. "Mama" features dueling classical and 12 string guitars and is a delightful cultural hodgepodge straight from the heart. As with his past songs, the tune features CJ as emcee, peppering the lyrics with turns of phrase and upbeat delivery.

You can find "Mama," well, CJ's "Mama" anyway, as well as his seven other songs of the month, on his Bandcamp page.

Those wacky kids, The Harmonica Pocket, are back with some nice mellow Earth-loving music for other kids with their third CD, SUNDROPS. 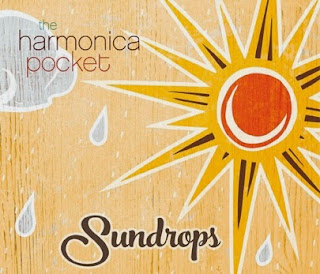 Even though Earth Day has come and gone, Keeth Apgar and partner Nala Walla are raising their son with lots of outdoor time. And you know what that means – no, not bug spray and sunburn. Uplifting, empowering songs about the positivity of nature! And if you can't get down with that, well then you just woke up on the wrong side of the planet. And it was recorded with solar power, to boot!

Produced by Apgar and Johnny Bregar and mixed by the omnipresent Dean Jones, SUNDROPS runs the gamut from "Sing in the Sun" to "Sun Song" to "You Are My Sunshine" to the title track. Catching on to the theme? On the other hand, there's also "Raindrops, "It's Gotta Rain (If You Want a Rainbow)," and "I Love Ukeleles." Wait a minute, what do ukeleles have to do with the rain? Well, have you ever seen somebody upset playing a uke in the rain? There you go.

SUNDROPS is stuffed with appearances from other children's artists such as Chris Ballew (Caspar Babypants), Marcy Marxer (of Cathy & Marcy), Alex Mitnick (of the Kaleidoscope Band), and more. Bottom line, rain or shine, the Harmonica Pocket wants to hit your child's musical sweet spot and put a summery song in their ear.

SUNDROPS is available May 19 from the band's website, Amazon, and iTunes.

Here is the video for the band's song, "Diaperman."

Don't Fence Me In – Andy Z
Everything I Didn't Say – 5 Seconds of Summer
In The Group – Tom Chapin
Nobody's Business – Rihanna Feat. Chris Brown
NOW That's What I Call Polka! – Weird Al Yankovic
Robots From The 4th Dimension – The Dirty Sock Funtime Band
Slow – Trout Fishing In America
Together We Can Fly – Danny Weinkauf
Posted by MrJeff2000 at 4:37 PM No comments:

Always On The Run – Joanie Leeds And The Nightlights
The Girl With the Squirrel in Her Hat – Caspar Babypants
Gloria – Van Morrison & Them
If I Lose Myself – Alesso Vs. OneRepublic
Lips Are Movin – Meghan Trainor
Motorcycle Mom – The Not-Its!
Raised by Trolls – Key Wilde and Mr. Clarke
Shake My Sillies Out – Andy Z
Voodoo Doll – 5 Seconds of Summer