We Are Going To Be Friends - The White Stripes
At The Bottom Of The Sea - Ralph's World
I Feel Like Going Home - Yo La Tengo
Let The Good Times Roll - The Cars
Shpilkas - Bunny Clogs
Private Idaho - The B-52s
Good People - Jack Johnson
Vega-Tables - Brian Wilson
Look Through Any Window - The Hollies
Funky Monkey - Yosi & the Superdads
Tears Dry On Their Own - Amy Winehouse
Posted by MrJeff2000 at 4:20 PM No comments:

Get A Clue - ScribbleMonster
I Have a Little Dreidel - Yosi & the Superdads
I Can't Let Go - The Hollies
Under The Sun - Dan Zanes
Goody Two Shoes - Adam & the Ants
Imma Be (Clean) - Black Eyed Peas
It Must Be Summer - Fountains Of Wayne
Come Play! - Eric Herman & the Invisible Band
Dance This Mess Around - The B-52s
8 Is A Number - Board of Education
Wait Your Turn - Mr. RAY
Posted by MrJeff2000 at 4:05 PM No comments:

The Air That I Breathe - The Hollies
Together Tomorrow - Tom Chapin
Happy, Happy Birthday - Baze And His Silly Friends
Back Off Boogaloo - Ringo Starr
Roy G. Biv - They Might Be Giants
Dinosaur in My Backyard - Hullabaloo
Private Idaho - The B-52s
It's Not Fair - Einstein's Monkey
My Doorbell - The White Stripes
Mexican Radio - Wall of Voodoo
That Thing You Do! - The Wonders
Posted by MrJeff2000 at 8:21 PM No comments:

Heart of the Country - Wings
The Race Is On Again - Yo La Tengo
California Dreaming - Mamas and the Papas
This Is Your Body - Baze And His Silly Friends
The Magic Is There - Mel Glazer
What Is A Mammal? - Marais & Miranda
You're Never Fully Dressed Without A Smile - Dan Zanes & Friends
My Angry Voice - The Sippy Cups
Goods - Mates of State
Muppets/Mahna Mahna - Primate Fiasco
Planet Claire - The B-52s
Posted by MrJeff2000 at 4:07 PM No comments:

I Won't Grow Up - Dan Zanes & Friends
In My Room - Beach Boys
It's The Beatbox - Cathy & Marcy With Christylez Bacon
Confessions of a Teenage Lima Bean - Bunny Clogs
What Do You Like More? - Robin Vaughn
What's That Smell - Mr. Oscat
The Bluegrasshopper - Secret Agent 23 Skidoo
Tube Sox - Princess Katie and Racer Steve
Seven - They Might Be Giants
Funplex - The B-52s
I Have a Little Dreidel - Yosi & the Superdads
Posted by MrJeff2000 at 4:05 PM No comments:

There is a fine line between cutesy/kitschy and genuine fun. Princess Katie and Racer Steve provide a little of everything (emphasis on the good stuff) with their third release, "Tiny Cool." 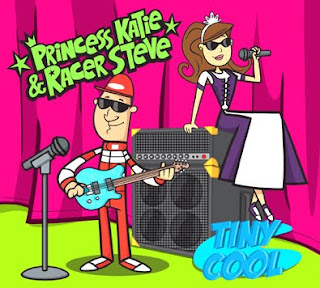 The CD features a selection of songs and skits for children (suggested) ages 2-8, with singalong lyrics included for reference. "Tube Sox," for instance, gives a laundry list of favorite things. "Japanese Robot" tells the story of a toy that runs on (get your tissues ready) love:

Now you should see him,

He's quite a sight.

For with all my love

He runs day and night.

The skits run as clever concepts (a beach radio station) and introductions to songs. "What could go wrong," Steve asks as the duo heads for lunch at the seashore. Leading to the next song, "Sand in My Sandwich." The title track, "Tiny Cool," tells a funked-up story of the brother and sister dance team of Tiny Cool and Little Lady. Turned away from a competition because of their young age, Princess Katie encourages them to dance and the crowd realizes that the duo can really boogie. Moral: Don't judge a book by its cover.

The New York-based duo, a married couple incidentally, have racked up some impressive plaudits. Parenting magazine wrote, "Katie and her talented band will win your kids over." Cookie named "Fast & Feisty" as one of their top kids CDs for 2008 and declared, "This is one kids' band that really knows how to rock."

"Tiny Cool" is available at Princess Katie & Racer Steve's Web site as well as CDBaby. They also twitter! You have to take a look – she's a princess, after all.
Posted by MrJeff2000 at 2:40 PM No comments:

It Makes You Feel Good - Renee & Jeremy
White Light - Wilco
Born Free - Hans Zimmer
Story of My Life - Shrek soundtrack
Educated Kid - The Hipwaders
Roam - The B-52s
Picnic - Fresh Young Fellows
Back Off Boogaloo - Ringo Starr
Science Is Real - They Might Be Giants
Love Story - Taylor Swift
She Just Doesn't Get It - Yosi & the Superdads
Posted by MrJeff2000 at 4:19 PM No comments:

Caboose - Lunch Money
It's a No No to Kiss a Rhino - Roger Day
Jumpin' Jive - Joe Jackson
All My Toys Are Broken - AudraRox
It Never Rains in Southern California - Mamas and the Papas
Dance This Mess Around - The B-52s
Oh My My - Ringo Starr
Mr. Tough - Yo La Tengo
Funky Monkey - Yosi & the Superdads
Good Vibrations - Beach Boys
Go Baby Go - Baby Loves Jazz
Posted by MrJeff2000 at 3:54 PM No comments:

My Imagination - Baze And His Silly Friends
I Have a Little Dreidel - Yosi & the Superdads
Your Room's A Mess - Rock Daddy Rock
Sugarcube - Yo La Tengo
Open Up Your Eyes - Tonic
The Numbers Song - Mr. Ray
Private Idaho - The B-52s
The Uncomfortable Truth - Nneka
Man On The Moon - R.E.M.
July Flame - Laura Veirs
Gotta Be Good - Ralph's World
Posted by MrJeff2000 at 4:10 PM No comments:

Percy on Pluto - The Nields
On A Carousel - The Hollies
Wake Me Up - Norah Jones
Good People - Jack Johnson
New Game - Tim and the Space Cadets
What You Thought You Need - Jack Johnson
Art Car - The Hipwaders
Applesauce vs. Sour Cream - The LeeVees
Love Plus One - Nick Heyward
Sweet Pea - The Honeydogs
Vintage Clothes - Paul McCartney
Posted by MrJeff2000 at 4:34 PM No comments:

If Mama Had Four Hands - Sarah Lee Guthrie & Family
I Have a Little Dreidel - Yosi & the Superdads
Why Go Up There? - Tom Glazer & Dottie Evans
The Bird That You Can't See - Apples in Stereo
Heigh-Ho - Los Lobos
Pinch Me - Barenaked Ladies
Balloon Man - Robyn Hitchcock
Say It Ain't So - Weezer
Funplex - The B-52s
If It's True - Yo La Tengo
Posted by MrJeff2000 at 4:26 PM No comments: