Hey an actual children's music album with an appearance from Dean Jones that is not produced by Dean Jones! Rather, KB Whirly (frontman for the Whirlygigs) has enlisted Patrick Hanlin (backbeat for Josh and the Jamtones) to helm the production of his new collection, CAMP SONGS VOLUME 1. In concert Whirly is a one-man band. But it takes a village (picture teepees) to build a better trek to camp. 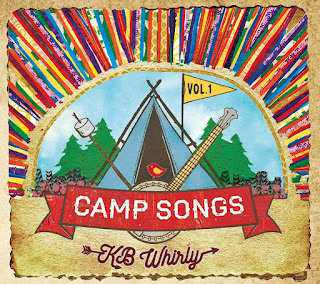 There's a lot to say about the classic kid's camp experience and music is an integral part of it, from morning "Reveille" to "Taps" before bedtime. I spent a summer at Camp Cejwin in Port Jervis (which closed in the 1990s) and another at the NJ Y Camps. Neither was my thing, but I did enjoy the escape into music – a commonality where I could excel among the more athletically-minded. In fact, if not for one stomach-grumbling unauthorized lunch break, I would have been a featured extra in that summer's production of "Guys and Dolls." But the very temperamental drama coach wanted to send a clear message to a roomful of 13-year-olds.

Mr. Whirly turns "The Littlest Worm" into a Spike Jones romp, duets with Jazzy Ash on "Hole In My Bucket," and uses a kid's chorus on the chestnut "Say Say My Playmate." No camp compilation gets a gold star without Allan Sherman's "Hello Muddah," wisely included here. There are five original tunes such as the tongue-twisting "Peter Pipers Pickled Palace" and "Not Goin Swimmin." I sympathize with the latter, as the Cejwin lake was miserably cold the first week but if I was not "with the group," I was banished to my bunk. I guess the counselors figured out of sight, out of trouble (for them).

I always say my kids are the best arbiters of what gets played in our house, once it's been sampled at dinner time. Matt (5) decided "The Bumblebee Song" was his favorite and began crafting new verses. Camp season will soon be upon us and KB Whirly's CAMP SONGS VOLUME 1 is a nifty throwback reminder of bygone (and evergreen) camp traditions. I recall name labels in my underwear, pre-address postcards to mail to my relatives, and 10 cent comic books that I could quickly trade with my campmates. And now I've got a ready-made soundtrack.

Here is the video for "Dessert Song in Skowheegan":

Dessert Song in Skowheegan from KB Whirly on Vimeo.
Posted by MrJeff2000 at 11:00 AM