The Shazzbots Hot to Rock Tots

For a niche genre, there are a ton of local children's musical acts. The Shazzbots fell under my rader because, well, I don't live in Ohio, where they're based. And their first two CDs didn't reach my desk, unlike their latest release, LIGHTSPEED. By the way, as a Mel Brooks fan, I did a double-take for the cover art, which is a pretty blatant homage to "Spaceballs." 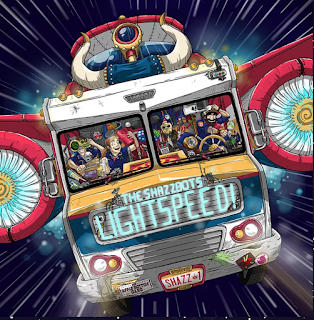 The Shazzbots is the passion project of Ian Hummel and bandmates Steve Frye, Mike Heslop, Josh Tully, and spouse Dianne Hummel. You know you're dealing with music for very young audiences when a rocking ode to being "On the Playground." The followup is a wacky tune about a third grader with a hereditary handlebar mustache ("Beauregard Oglilby Balderdash"). As far as lesson songs, you can choose between the peppy "Clean Plate Club" and "Read a Book Today." And would you believe there's a totally original song with the never-before-used title "Snow Day"?

The Shazzbots also decided to "save children's television" with a Kickstarter fundraiser for a show called "We're the Shazzbots," based around the crew's adventures in their space Winnebago. You can view the pilot episode, however it doesn't look like there's been much progress in getting to another galaxy.

There's nothing fundamentally wrong with the Shazzbots and their peppy, interactive brand of children's music. For someone who's heard similar material from regional – and international – acts, there's just nothing particularly distinctive about them. And how many six-year-olds are sophisticated enough to navigate to more sophisticated children's fare? For Ohioans and surrounding area residents, though, the Shazzbots may just be the cat's meow. So hitch your vehicle to their RV and prepare for a local dose of light-hearted kid's fare.

LIGHTSPEED is available on March 1 from the Shazzbots' website, Apple Music, and Amazon.

Here is the video for the band's song, "Milkshake":

Parental love is a powerful, sometimes overwhelming emotion. It can cause you to lose inhibitions, tempers, even friends. But at its core is the most prime of sentiments – protecting the innocent and educating them about the world. Into this maelstrom comes KB Whirly (Keith Wasserman) and his CD of love songs and lullabies for his daughter, NOW THAT WE'RE HOME. 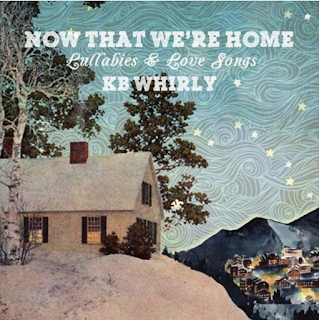 Everyone has encountered that parent who sits in the park, or the subway, or the local non-Schultz-owned coffee shop and regales all with tales of supervising youth; as if these sagas are newly-minted experiences that have never, ever been witnessed or recounted. What bonds us all together as a community is the knowledge that one day, even these parents shall join our ranks, and sit in the park, subway, or beverage shack, and realize "Ah yes, I remember it well."

I imagine that all color may have drained from Keith's face (if he hasn't passed out altogether) but all is not lost! NOW THAT WE'RE HOME is indeed about the organic expansion of the Whirly couple to the Whirly family. The nine songs on the disc, produced by the ever-capable Dean Jones, delve into more sophisticated matters of the heart. What can I do to challenge her without doing too much for her ("What Will You Do")? Will she grow to love nature ("Come Walk With Me")? Will she have an imagination ("Valley of Dreams")?

KB Whirly is (mostly) a one-man band, and the sweet, lyrical nature of NOW THAT WE'RE HOME bodes well for live performances, if young audiences can stay awake. Be forewarned that there's no peppy dance break or electric guitars or even drums on this release. Keith is enthusiastic and euphemistic with his pro-love agenda. NOW THAT WE'RE HOME is perfect for that late afternoon return drive from a far-off destination, where little passengers can drift off to slumberland with happy memories and a gentle serenade from Mr. Whirly.

NOW THAT WE'RE HOME is available on Friday, February 22 from KB Whirly's website, Amazon, CDBABY, and Apple Music. Keith will be performing a Facebook Live concert that evening to debut the CD.

Here is the video for Whirly's song, "Just Us Three":

Yoo-Hoo from the Bayou from Johnette and Scott

American music casts a big shadow. There are many regional accents and generational evolutions, from folk music to jazz. Down in the Louisiana bayou, the creole cooking percolated with R&B, zydeco, and dixieland. Johnette Downing and Scott Billington have taken 20 years of firsthand experience to produce SWAMP ROMP, a collection of 16 Nawlins'-infused tracks. 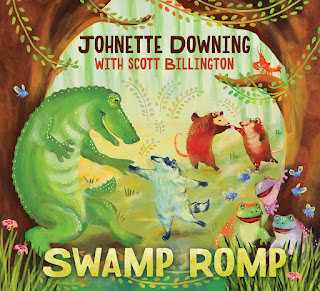 The couple's roots are suitably and organically synched with the territory – Johnette growing up in the area listening to her parents and siblings playing ragtime in the French Quarter. Scott performed in New England coffeehouses working on his sound before meeting Johnette at a New Orleans music conference, leading to their marriage in 2013. There's a bouillabaisse of musicians contributing to the selections on SWAMP ROMP, from members of the Dukes of Dixieland, ReBirth Brass Band, and Dirty Dozen Brass Band, and such interestingly named individuals as "Washboard Chaz" Leary and Lee Allen Zeno (to pick a few).

SWAMP ROMP took five years to bring to fruition. For their labor of love,
Johnette and Scott provide both a sonic recreation of New Orleans as well as an education of the culture. "J'ai Vu Le Loup, Le Renard Et La Belette" retells on old French dance tune. "Bamboula Rhythm" recounts the African freed slaves who gathered to socialize. "How To Dress A Po' Boy" and its accompanying video could find a place on a cooking show, with an entree of "Crawfish Etouffée."

SWAMP ROMP comes with a booklet (if you get the physical CD) with descriptions and photos for each song. But the real attraction is the authenticity and simplicity of the music produced by Johnette and Scott, recorded at home in the bayou with longtime collaborator Steve Reynolds as recording engineer, and delivered directly to young audiences.

SWAMP ROMP is available on February 15 from Johnette and Scott's website, Amazon, and Apple Music.

Here is the brand new video for "Bamboula Rhythm":

Shine On – Dan Zanes
Washington, Dc – The Not-Its!
Take On Me – Weezer
Hammer – Aaron Nigel Smith
Who, What, When, Where, Why – The Bazillions
Humans Are Still Evolving – Dean Jones
One Day By The Riverside – Brady Rymer & The Little Band That Could

We have entered the epicenter of the Forman renaissance. Or perhaps we should call it the Forman dynasty. Jack Forman has once again annexed his role in the popular children's music group Recess Monkey and perch as host of SiriusXM's Kids Place Live's "Live from the Monkey House." With his second solo CD, OFFICE HOURS, Jack maintains his status as a multi-talented multi-hyphenate for the preteen set.

Through his fictional press agent Chive, Jack points out, "Though I have kids of my own now and am surrounded by them on the radio and band shows, I think the childlike energy of these songs begins with the eight-year-old in me that never really ever went away... though let's be honest: much of his hair did." 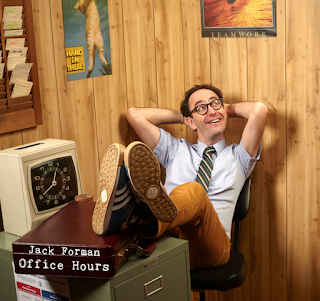 Jack's music answers many questions, including the mystery of "This Cat (Will Eat Anything)" – the dealbreaker is Pop Tarts. You can just imagine what happened to inspire "No Tooting on the Dance Floor," although Jack metaphorically warns "you can't put the toothpaste back in the tube." Sticking with the professional theme, Jack urges listeners to have "#Goals," such as "be a bird – like a mascot for a hockey team." His Mister Rogers-esque tribute "Harmony With You" reminds kids that no matter how bad things appear, there's always someone in their corner. Jack's son Oscar duets (so to speak) to rebut Jack's claims on "When I Was Young":

When I was a kid, we only had three Star Wars movies. Can you even imagine that?
Whoa!
And my Gameboy didn't even work at night!
How long ago was this, Dad?
We're talking mid-to-late 1980s here.
This is all too much.

Jack has a casual but worrisome Star Wars obsession. Past solo and Recess Monkey tunes include "Chewie To Your Han" and "Yodeling Yoda." Jack now mines the rich tapestry of the George Lucas empire with 'These Droids," a return to Tatooine, the fictional world that now boasts its own Wikipedia page. Thus, proving once again that you can take a 40-year-old one-liner from a sci-fi film and turn it into musical comedy gold.

On OFFICE HOURS, Jack puts on his big boy adult clothes and demonstrates why he's still a force to be reckoned with in the ultra-hyper-mega competitive world of children's music. Well, the first two-thirds of that statement are true. And really that's all you need to know.

OFFICE HOURS is available on February 15 from Jack Forman's website and Amazon.

Here is the video for Jack Forman's song "Yodeling Yoda":

There's a reason it's called the Gustafer Yellowgold Show. Creator Morgan Taylor leads a quartet of performers accompanied by videos that interact with him. With the lyrics on-screen, audiences can participate by singing any, or all of the songs – provided they're old enough to read.

Morgan brought his troupe back to New York's Symphony Space for the 14th year in a row, making him the titleholder (Tom Chapin used to hold that distinction) for consecutive appearances. An eager crowd seemed familiar with their favorites, and were amused at the newest songs, including "Hot Malt Eagle," from Gustafer's number one Audible.Com kid's audiobook, "I'M FROM THE SUN."

Our history with Gustafer dates back to 2007, when we made a trek to the Museum of the Moving Image in Astoria. The draw was honestly old Pink Panther cartoon as well as the live Gustafer Yellowgold performance, which wound up being a turning point in seeking out live children's music around New York City, such as the Long Island Children's Museum and other venues. While we've returned to the AMMI, they have stuck with mostly recorded programming for kids and sunsetted live music.


Morgan is fiercely protective of his content, and rightly so. When your currency is self-produced videos, the last thing you want to see online are multiple copies of live performances, drawing away from your own material (which includes links to live shows and merchandise). For that reason, you'll need to click through to his YouTube page to see full videos.

The Peter Jay Sharp Theater remains a comfortable, relaxing place for family shows. While you always gamble on crying children and poopy babies, we seem to have hit a good patch at Symphony Space. Upcoming shows include a singalong to the Dick Van Dyke classic film Chitty Chitty Bang Bang on Saturday, February 10 and 123 Andres on Saturday, February 17.
Posted by MrJeff2000 at 4:36 AM No comments: