One of my most memorable concert experiences in 2017 was seeing Tom Petty and the Heartbreakers live at Forest Hills Stadium in July. Although it was the third time I'd see the band, a decade had passed since the last time. Plus Petty was billing the shows as their 40th and final tour. Prophetically, he was dead less than a month later. Another memorable live 2017 experience occurred in January at Jalopy where I witnessed Bears & Lions performing live as part of Hootenanny III. The connection between these disparate acts? Both hail from Gainesville, Florida, a hotbed of musical diffusion and confusion. 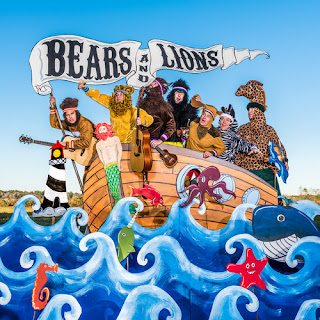 Bears & Lions have returned to make Gainesville proud with their sophomore CD, NAVIGATE. The band alerts us that the animals (including Gorilla, Moose, Giraffe, Bison, and Zebra) have escaped from the circus and have set out to break the rules and create music to inspire everyone to be more tolerant and free in everyday life. That's a tall order for a [SPOILER ALERT] bunch of guys in funky costumes. But don't tell that to the kids.

A loosely-themed concept album, NAVIGATE finds our menagerie virtually lost at sea as they attempt to save "Jonas the Whale" from captivity in Saudi Arabia. Along the way there are pirates, a "Merman Named Jim," and some lessons about friendship and nature. Some of this was explained in the accompanying press release – documentation that might help parents explain the adventure better to children who get the CD or download the tracks online.

Bears & Lions is more about the fun than anything else. That's what you should expect from a kid's group led by a bear with six-pack abs. "Pirate Pete" recounts the band's encounter with some sour scallywags as they embark on their voyage. "Lighthouse" is a pop-folk/Blues Traveler-esque ode that draws the parallel between a lighthouse on the ocean and a nightlight in a child's bedroom. With its horn section and singalong chorus, the track "Hercules" sounds like a throwback tribute to the Wiggles:

"Merman Named Jim" is a nautical rap track about the underwater denizen who finally leads the band to their ultimate destination. By golly, for a band from Gainesville, one wonders why there isn't there a gator in the mix. Perhaps one will stumble out of the woods for the group's next adventure. In the end, NAVIGATE lands our gang to "Animal Land," where everyone is a member of the same tribe, with the refrain "We all are one." If that means being one with bears and lions (and tigers, oh my?), I'm fine with it. And so should the junior members of your pride.

NAVIGATE is available on Bears and Lions' website, Amazon, CDBABY, and iTunes.

Here is the video for Bears and Lions' groundbreaking song, "Pancakes":