The world is a messed-up beautiful place. And the American President is a very divisive figure; to the extent that I resent including him in any discussion about children's music. But music is a gateway to real-world issues for many children. Music is a way to gently show youthful listeners that evil can be overcome through unity. 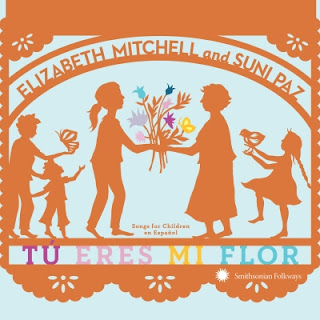 Smithsonian Folkways has tasked Elizabeth Mitchell and Suni Paz with a mission to display this musical unity with grace, charm, and simplicity. Their CD, TU ERES MI FLOR echoes the name of Mitchell's website "You Are My Flower." The 17 songs are primarily in Spanish, although hints of other cultures stream through, including on Dan Zanes' "Hello."

I'll leave the CD's mission statement to Suni Paz, who emigrated to the United States from Argentina in 1965: "This recording is now – more than ever before – a necessity. We are living in an historic time, in which Latinos, Hispanics, and all immigrants are being disrespected and vilified, so honoring their language in songs is much needed."

In its 70th year, Smithsonian Folkways makes nearly 60,000 tracks available in physical and digital format as the nonprofit record label of the Smithsonian Institution, reaching 80 million people per year. While not explicitly part of its mission, TU ERES MI FLOR accomplishes its mission – using song to show the connection between Spanish and American folk music. Elizabeth Mitchell and Suni Paz demonstrate that sometimes a message doesn't have to be chanted at rallies or walked about on placards. Sometimes a song can provide hope for blue clouds or peace like a river. Sometimes a song is enough.

Here is the video for Elizabeth Mitchell's song, "Sleep Eye":