Siama and Auntie Dallas Travel Back to Africa

Siama Matuzungidi's story is an immigrant's tale – fleeing Zaire as a young man with his guitar strapped to his back. Due to political unrest, he and his band relocated in Uganda and became a favorite of dictator Idi Amin, who would routinely wave his hand for them to continue to play. The musicians wore sunglasses to avoid eye contact because Amin's soldiers would beat their band leader for trying to avoid performing for him. Amin once even made a surprise visit to the band's home, wanting to hang out. When he left, the neighbors demanded the band move, fearing what Amin could do if he became a regular visitor. 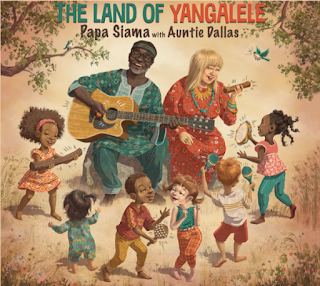 The disc works as companion piece to Putamayo's African compilations. But Siama is also a master technician in the field of African music stylings, which allows him to work in different languages, such as Swahili, Lingala, and Kikongo. His harmonies and warm byplay with Auntie Dallas also differentiate their music from traditional "third world" artists. But that should be expected, since Dallas hails originally from North Dakota, not exactly a dark continent.

THE LAND OF YANGALELE demonstrates why Siama has ably showcased his talents in Minnesota since the 1990s. Perhaps 2018 is his opportunity to truly go worldwide and influence a new generation with his music and story.

THE LAND OF YANGALELE is available on March 23 from Papa Siama's website and Amazon.