Josh (Shriber) and the Jamtones make you cry "uncle" by turning up the funk to 11 on their new children's music CD, WE ARE O-N-E! 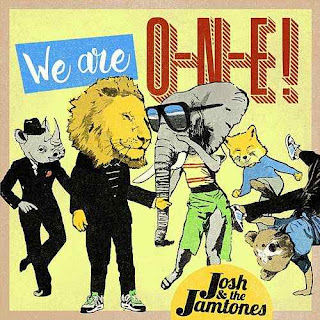 The Boston-area musician/music educator breaks open a whole new box of crayons to paint some positivity and unity with ska tracks like "1 Of a Kind" and "Fun!" Guest stars come out for a cover of "Why Can't We Be Friends" (featuring Mista Cookie Jar) and "Move UR Feet" (with Secret Agent 23 Skidoo).

Josh and the Js judicial use of cover songs allows them to reinvent such relics as "Build the World a Home" (already a top hit on SiriusXM's Kids Place Live), Bob Marley's "Is This Love," and Paul Simon's "Me and Julio (Down By the Schoolyard)." Considering it's been a generation (or two) since those songs were first hits, Josh gets props for track selection and putting a (mostly)
new spin on the songs.

The Jamtones go back to their hebrew roots for the final two tracks, "Oseh Shalom" and "Mamaweyah," the latter repurposed from their 2014 CD, JAMMIN' WITH JEW VOL. 2. Like a Pied Piper Matisyahu, Josh will bring your kids kicking and screaming to the rhythm as well as the rock and redeemer. If you like your religion old school, there's a high-stepping gospel "Amen" mid-CD as well.

We Are O-N-E plays as a family party CD (Josh and I share a niece, so this is actual and factual). If you're ready to spare the reggae and kick out the jams, Josh and Jamtones have been waiting for you to groove.

WE ARE O-N-E is available from Josh and the Jamtones' website, Amazon, Soundcloud, and iTunes.

Here is "Build the World a Home" from the new CD: