Sing Along on Gustafer Yellowgold's Brighter Side

Whimsy will only get you so far with kids. You need genuine innovation and sincerity, otherwise you're up the creek without a binky. Novelties and gimmicks have a lifespan, which is why it's rare for something fresh to catch on and succeed with generation after generation of youthful audiences. I'm not talking about Sesame Street, with its corporate machine attached to it. I'm not talking about the Wiggles, who are into their eighth cat life (and second set of talent) and at least their third American hosting service. I'm talking about Gustafer Yellowgold, him being from the sun, and certainly the enemy of every spell-check mechanism in creation. 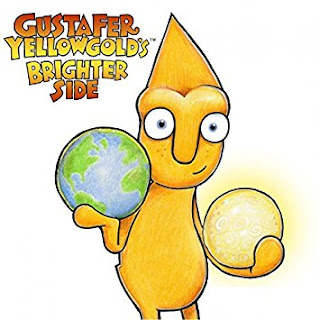 Created more than a decade ago by musician/illustrator Morgan Taylor, his little jaundiced space visitor is now the subject of eight releases. The latest, BRIGHTER SIDE, has the distinction of being the first released as CD-only, with videos being issues periodically on his Youtube channel.

The Gustafer Yellowgold fable recounts an adolescent-like creature raised on the sun who comes to live on Earth, with a pet eel and many quirky friends and episodes. Honestly, describing any single part to a newcomer requires patience and a sense of humor. "Gustafer likes to jump on cakes." "Oh, so he plays with his food." "No, it's just a pastry fetish. But not a fetish really."

BRIGHTER SIDE is divided into night and day songs, filling in some background about "Hot Nights" that inspired Gustafer to abandon him homeworld and best friend, "Ellen Lemon." His journey (recounted in "Ride A Line o'Stars") gives Gustafer the chance to sing "I Love the Night." And he encounters the villainy of "Baconstein," who is not to be confused with DARK PIE's "Cakenstein." This mellow fellow Yellowgold is part Harry Nilsson, part Schoolhouse Rock, and all-around fun.

Gustafer Yellowgold has remained engaging, quirky, and fresh. We stumbled across the live show 10 years ago at the Museum of the Moving Image and came away singing the songs. A decade later, the songs on BRIGHTER SIDE show how Taylor manages to fully delineate a world populated by evil bacon and ageless aliens, even as it defies easy explanation. But perhaps that's the reason Gustafer Yellowgold is celebrating his second decade on Earth, jumping on yet another cake in celebration.

BRIGHTER SIDE is available from Gustafer Yellowgold's website, Amazon, and iTunes.

Here is the video for "Lucky Day" from the CD: