Mister G looks forward to a cleaner bilingual world. Or at least a world where people can communicate through music. For his eighth CD, MUNDO VERDE/GREEN WORLD, Mr. (and Mrs.) G (Gundersheimer) deliver a speedy (27 minute) discourse with "Agua/Water," "Patas en el Aire/Paws in the Air," the title track, and so forth. 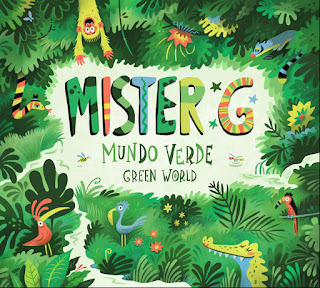 A Latin Grammy winner, Mister G partnered with Mom's Clean Air Force, the National Resources Defense Council, and Voces Verdes in the release of the CD. To promote the environmental aspect of MUNDO VERDE, he is headlining a concert on Capitol Hill on September 27. This is clearly a passion project of The Gs to achieve cleaner air, land, and waterways.

A veritable host of musicians contributed to MUNDO VERDE, including Oscar Stagnaro (Peru), Mauro Refosco (Brazil), Arturo O'Farrill (Cuba), and Marlow Rosada (Puerto Rico). MUNDO VERDE carries two important message – People come from different cultures and may speak different languages but we all share the same planet. So not only should we be tolerant of each other's differences, we should celebrate them, while lending a hand to save our resources. Sî, mundo importante.

Here is the video from the title track, "Mundo Verde":