U2 makes important music; always has and always will. Green Day started making silly music, suddenly decided to make important music, and now wishes they could get back to their earlier, sillier days. Lard Dog & the Band of Shy specialize in silly music that sometimes sounds important. But it's always entertaining. 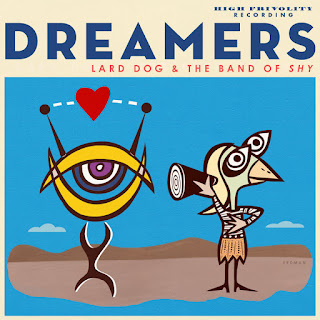 Steven Erdman (that's Lard Dog to you) has turned his multi-media background to children's music. Their second CD, DREAMERS, expands and deepens the tale of Belopia (where Lard Dog is from). The music is a gateway to the live experience, witnessed in the videos that forcefully suggest parents get their kids to a live performance ASAP.

DREAMERS opens with a blast of Tower of Power-sounding horns, positive affirmations and harmonies, and elegantly styled wordplay:

Similar sentiments abound in "Don't Let the Boogah Bug You Out" (about as political a tract as Lard Dog dares to go) and "I Like," the hit single that you couldn't miss on SiriusXM's Kids Place Live this past spring. People from all walks of life find the Lard Dog message irresistibly earmwormy – sidekick singer HoneyBabe Lucky Feather) Kendy Gable vamoosed to pursue other musical interests in a southern clime this summer and was replaced by chanteuse/banker (HoneyBabe Raé Raé) Sharaé Moultre. If you want a good taste of Sharaé's abilities to carry her fair share of the nonsense, check out the historical recounting of "Rock In The Rockefeller," about what happened to Mexican artist Diego Rivera's mural for Rockefeller Center. Lard Dog gets uplifting on "Take The Road" and "Have A Good Day," not too much of a stretch on a CD that emphasizes the uniting concept of "slurp the noodle of life."

It's a testament to Steven's everyman nature that I was in the same tiny space with him – Red Hook's Jalopy in January (maximum capacity 78) and didn't realize it was him until he morphed into character. Looking back, I should have taken the Belopian Pledge and offered to remain forever frivolous. Now that I know better, I wholeheartedly concur that Life's A Real Dream! LARD for all!

DREAMERS is available on September 29 from House of Lard, Amazon, and iTunes.

Here is the video for the band's single, "I Like":