If the kindie movement was a car, Dan Zanes occupied the driver's seat for more than a decade. The former New Hampshire-born rocker turned his attention to children's music in 2000 with ROCKETSHIP BEACH and nothing's been the same ever since. But Dan was not content to work the same mine for very long and kept leading audiences down different avenues; from sea shanties (SEA MUSIC) to Carl Sandburg/Mark Twain (PARADES AND PANORAMAS) to show tunes (76 TROMBONES) to latin rhythms (¡NUEVA YORK!). 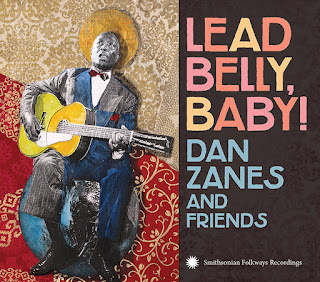 It's been a while (four years) since the last Dan Zanes and Friends CD. A lot has gone on, including Dan and his fiancé Claudia Eliaza pioneering a sensory-friendly folk opera, "Night Train 57" that debuts in Washington, DC in October. But Dan returns to his roots – as a seven-year-old in Concord – when he got his first library card and checked out a Lead Belly LP. His new CD, LEAD BELLY, BABY! gathers a host of notables to perform together and play homage of the songs of Huddie Ledbetter.

Lead Belly was dubbed "The King of the 12-String Guitar," however LEAD BELLY, BABY! is not looking to commemorate every song as if preserved in amber. These are lively arrangements, with "Cotton Fields" done in Spanish harmonies by Sonia de Los Santos and Elena Moon Park with additional vocals by José Joaquin Garcia. Every generation has its slang and catch phrases and Lead Belly captured the colloquialisms of his times, in songs like "Whoa Back Buck":

Whoa Buck – gee by the lamb
Who made the back band
– oh, Cunningham

Took my gal to the country store
I bought my gal some calico
Taking my gal to the party, oh
Thinking we can dance,
Will it settle our souls?

Smithsonian Folkways is releasing the CD, bringing the music of Lead Belly full circle. As a foundational artist of Folkways Records, Ledbetter passed away in 1949 right before the Weavers turned his "Goodnight Irene" into a worldwide sensation. But his children's music is the focus here, from "Skip To My Lou" (with Chuck D and Memphis Jenks) to "Boll Weevil" (with Aloe Blacc and Pauline Jean).

"Serious" intent is deadly when trying to get children to "appreciate" music. Dan Zanes and friends have spent the better part of two decades finding low-key gateways to introduce young audiences to important figures from the near- and far-flung past. There's a 40-page booklet that will allow adults to answer most general questions without scrambling for Siri or a search engine. Using Zanes' cachet and goodwill, LEAD BELLY, BABY! sets a place at the welcome table for a pioneering spirit in folk music, Huddie Ledbetter.

Here is my video of Dan Zanes and Friends playing "Welcome Table" at KindieComm in 2014: