What happens when a popular group takes a recess? What happens if it's a popular children's music group like Recess Monkey? Well, in the best of all worlds, you at least get a solo album from one of the performers. In this case, the Monkey Man in question is Jack Forman, and the solo album is SONGS FROM THE MONKEY HOUSE. 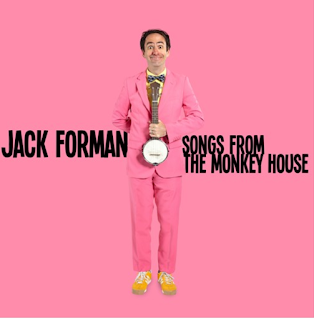 If you think you know Jack, then you probably know he's an ex-elementary school teacher and current host of "Live from the Monkey House" on SiriusXM's Kids Place Live. Did I happen to mention his work on a baker's dozen Recess Monkey CDs and the more than 1,000 live shows they've performed? Resumé back in the drawer, Jack doesn't exactly reinvent the wheel with SONGS FROM THE MONKEY HOUSE, which are drawn in part from phone-in encounters with listeners (kids under the age of 13).

Jack is a Star Wars fanboy (I can attest from firsthand conversation) so the track "Yodeling Yoda" is a predictable, amusing curio. Less known was his affinity for Roald Dahl's "Charlie and the Chocolate Factory," which serves as the basis for a kid's Survivor tale, "Candy Tour." I could almost sworn I heard Drew Holloway's voice singing "A Little Cheese" and its sister song, "Blue Cheese," however this CD is all Jack.

Jack doesn't have a kid's show for nothing. Let me reword that; Jack makes doing a kid's show look like it's no work. His conversations with first- and fourth-graders produce genuine emotion and laughter as the kids sometimes beat Jack to the punchline. SONGS FROM THE MONKEY HOUSE allows Jack to deliver some of his own, such as the double entendré "I Lost My Lunch" and jock-ular "Sportball Anthem," for the non-athlete in every household.

From a parent perspective, and especially as a reviewer, I gave the disc an extra spin to mentally separate Jack from his simian bandmates. Does it hold up? Or is Jack the Joey Fatone of Recess Monkey? Happily, I can declare that Jack is up to the task at hand, and his songs are a neat companion for the Recess Monkey oeuvre. Yes, that's a French word. Now go enjoy some rollicking Monkey music with your blue cheese.

SONGS FROM THE MONKEY HOUSE is available September 29 from Jack Forman's website (which directs you to Amazon).

Watch Jack live on "Talk Like a Pirate Day" on SiriusXM: