LARD Dog: Having Fun in the Colander Sun

There's a Beach Boys documentary from the early 1980s that haunts me. 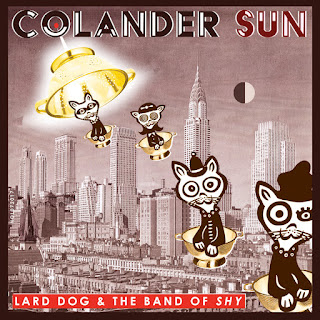 Brian Wilson is shown at the height of his paranoia and sorrow (and goes surfing with the Blues Brothers). But he describes how his brother Dennis would coax him to write songs with McDonalds hamburgers. "He'd give me one hamburger for every song," Brian explains. Then he shows the crew a closet of reel-to-reel tapes and other materials and you realize that Wilson fed his enormous hunger by writing HUNDREDS if not thousands of these quick tunes.

It's not easy to write one song. Now imagine promising to write and release one song a month – and give it away to your audience. That's the 2017 challenge for Lard Dog and the Band of Shy. They release their July song on the cusp of August. "Colander Sun" describes their love of wearing a straining container on the head. It's an orange slice of SoCal hijinx with the usual LARD Dog wordplay.

The Band of Shy is also hosting a selfie contest, with a LARD Dog t-shirt as the prize. Just tweet a picture wearing a colander as a hat. Winners are selected at sole discretion of Lard Dog. Just e-mail your photo to lard@houseoflard.com or post on Instagram with hashtags #LardDogColander #LardDog (so they can find it). Contest deadline in August 30, 2017.
Posted by MrJeff2000 at 7:19 AM