As tough as it was to admit, I am no longer the target audience for MTV. In fact, I haven't watched any programming on the network in a number of years. If you include VH1 in that conversation, I believe it's been almost 20 years since "Behind The Music" was a regular series. 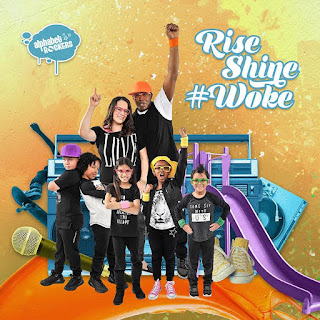 The MTV Music Awards were on recently and I set the DVR to record the show, since I'm taking the teen to see Katy Perry next month and wanted to see if she would perform one of her new songs. I wound up fast-forwarding everything before and after Pink (getting a Vanguard Video award for seven albums over 15 years). Shocking to me that Pink is now in the discussion as a video visionary with people like Michael Jackson – and receiving the award ahead of the Foo Fighters. But the show is no longer catering to me; it's for two generations removed. And that goes for some of the children's music that I receive.

If you want a cocktail with equal parts affirmation and inclusion, the Alphabet Rockers are back with their latest CD, RISE SHINE #WOKE. The messages are clear, the lyrics speak to current social conditions, and there's even a sound bite of Barack Obama to drive home the sentiments. RISE SHINE #WOKE is 17 tracks of kid power, from "Don't Wait" to "I'm Proud" to "Different" to "Stand Up For You." Core duo Kaitlin McGaw and Tommy Shepherd clearly set out on a mission. Who am I to stand in the way of a movement.

RISE SHINE #WOKE is available on September 1 from the Alphabet Rockers' website, Amazon, and iTunes.

Here is the debut video from the CD, "Shine":