Imagination: A Penner for Your Thoughts

Ever see Twin Peaks? One of the most haunting elements about the show was the music by composer Angelo Badalamenti. And the theme song, "Falling," which was sung by Julee Cruise. Showtime has revived the show. And most episodes end with a female vocalist singing some ethereal song of a similar ilk. 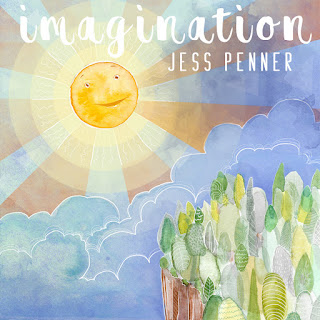 I thought of Twin Peaks while listening to IMAGINATION, the new children's music EP by Los Angeles singer Jess Penner. You get six classic covers, such as "I Don't Want to Live on the Moon" and "You Are My Sunshine" as interpreted by Jess. You also get the original title tune and closing track, "Forever In My Heart," which gave me flashbacks to those David Lynch closing segments. In a good way, mind you.

Penner grew up listening to oldies and folk music and toured in a Christian rock band, so her influences are pretty diverse. Her music seeks to deliver a positive message without being preachy. An LA professional, she shares her knowledge of the recording industry on SongCents, her blog. Recent posts discussed anxiety and how to make an impression with your press kit.

It isn't easy to balance being a stay-at-home mom of two and an independent female songwriter. But Jess Penner is doing it with grace, charm, and simplicity. All it takes is a little IMAGINATION.

IMAGINATION is available on August 11 from Jess Penner's website, Amazon, and iTunes.

Here is the video for the title track, "Imagination":