Jumping for Joy: The Return of Caspar Babypants

It's difficult to establish a unique voice. There's so much product out there that few people stand out from the very first musical note. Chris Ballew doesn't have that problem. Entering the second decade in his second career as children's musician Caspar Babypants, Chris has turned out 13 – yes, 13 – CDs that brim with uniqueness. 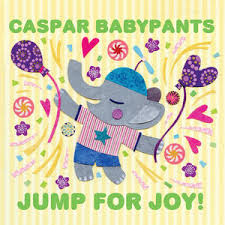 His latest CD, JUMP FOR JOY! is as buoyant and boyish as the rest of the Caspar Babypants pantheon. As with past CDs, Chris is chock full of the stories behind the songs. "Pushy the Tug" came from a pet name he and his wife (CD artwork and local artist Kate Endle) exclaimed every time a tugboat chugged by their home in Seattle. "Blackberry Pie" is credited to his (then) six-year-old son, Augie, although like every Caspar Babypants composition, he couldn't help put his own distinctive upbeat stamp on it.

Caspar Babypants is all about two things… updating traditional favorites with new lyrics and arrangements and taking bizarre concepts and taking them on oddly logical journeys. JUMP FOR YOU! features the standout example, "My Pants Are On Vacation":

Caspar Babypants music also works on two levels. Kids enjoy the hummable melodies and gentle, amusing material. It's so approachable that when we attended a live performance years ago, Chris started a song intro, "This is a song about a bear..." and Ben cut him off by shouting the title of a particular track he liked. Realizing that yes, he had written two songs about bears, Chris self-corrected and explained, "Yes, this is my OTHER song about a bear." Adults like the wordplay and jigsaw, not-random conceit that burst from Chris's days in the Presidents of the United States. "Free Couch" is about a country tick that moves to the big city and finds a place to live. The chorus? "Don't freak out I'm living in a free couch." Don't just read it – say it. Then you'll get it.

Here is the video for the new song, "Underground":