I have two distinct memories from my deep dive into the land of children's music; one for each of my sons. The first time we heard Bill Childs' Spare the Rock podcast, he played Roger Day's "It's A No-No to Kiss A Rhino." Eight-year-old Ben looked stunned, started laughing, said "Again," and made me play the song 3-4 times in a row, laughing continuously. Eight years later, after I had started reviewing CDs, we heard David Tobocman's "The Owie Song." Two-year-old Matt looked stunned, started laughing, and looked at me expectantly. Ben (now 16) stepped in and said, "Play it again, dad." And we did. 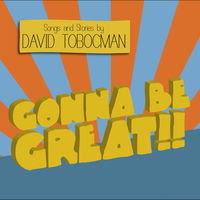 Five years is an eternity in children's music. But finally David Tobocman has released his fourth children's music CD, GONNA BE GREAT!! The title itself encourages reviewers to enthusiastically endorse the disc; and it's pretty darn good. For 25 years, David has made a living recording music for film and television. Along the way, he's released four CDs for kids. GONNA BE GREAT!! has been long-awaited in my household and the kids listened over two nights of dinners, as if we were studying audio transcripts ultimately resolving the "Where's Waldo" conundrum.

David manages to sneak in some subversive themes, such as "Something Called King Lear." He describes taking his daughters to see the Shakespeare play, then having them descend into behavior akin to Regan and Cordelia from the show:

It's just like Romeo and Juliet or like them Clampetts on TV.
Don't let anybody tell you where you're at. It isn't where you ought to be.

While "Dalia" is the story of an elephant who ice skates, subtly explaining the "everyone is special" conceit, David takes some very obvious concepts that would draw an asterick in parenting manuals and turns them into songs. How many adults needs to really admonish "Don't Put Money In Your Mouth." Scratch that – after writing the previous sentence, I've heard from two people who said that was an issue for their young ones. A similar concern would be "Take The Spider Outside," although my kids just accompanied me on an errand specifically to buy a new fly swatter to take care of various and sundry bugs in our domicile.

GONNA BE GREAT!! winds down with the inevitable family/bedtime/ballad, in this case called "Smile For Me." However it's a friendly take on picture-taking and private and public displays of affection, as David simply sings, "We're not on TV, it's only you and me, don't say cheese, just smile." I may not get another iconic memory from this CD, but there's still a chance for your family. Hit the Soundcloud link and see if things are gonna be great for you and your youthful music aficionados.

GONNA BE GREAT is available at David Tobocman's website, Soundcloud (with a bonus song), Amazon, and iTunes.

Here is the video for David's song "America's Our Country." Appropriate for our times: