The age range for people producing music for children is certainly diverse. If you're skeptical, remember that a collection featuring unreleased Ella Jenkins (93 years old) songs came out last year. Then there are groups that feature kids – most recent, the Oot 'N Oots (four brothers and one daughter). In between, there are musicians with young children, college-aged children, children who perform on their parents' CDs and live shows, and even multi-generational groups (Like Father Like Son). 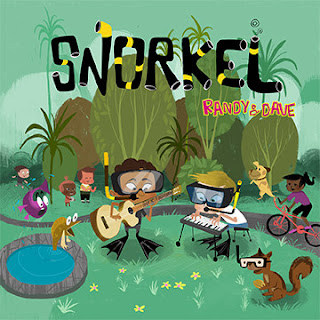 The result to this situation is that there is no equivalence between the age of the performers and the relevance to their audience. I'll be reviewing a new Raffi CD in the near future, and certainly nobody would dare call Raffi obsolete with all his charitable children's projects. Occasionally a CD comes out that sounds like "your father's children's music," which is to say, the songs sound like they were designed to appeal to kids but somehow miss the mark.

Randy Sharp and Dave Kinnoin have released their third collaboration for kids, SNORKEL! While it has some bright spots, I felt it hit some wrong chords as well. Not too many kids in the Ariana Grande generation have any idea what "Funny Papers" are, yet there's an entire song based on that premise. With the country divided politically, "Everybody's Ignorant" breaks it down to brass tacks – nobody can know everything, so why even try to be an expert on one thing. Their response to climate change – and the prospect that water levels will rise and flood cities like Miami – is addressed by the fears of the protagonist on the title track, who decides to wear a snorkel everywhere he goes, just in case. And with migrant families being forcibly separated – some never to be reunited – this is just the wrong time in history to release a fanciful kid's ode called "I Should Have Been Born in Mexico."

"Squirrel" is the stock "it wasn't me/blame a fantasy animal intruder for trashing the house" song. For the Google-savvy, the duo discuss some historical figures and their accomplishments in "Oh Wait, That Wasn't Me":

Twice I made a solo flight
Where none had flown before.
First Atlantic, then Pacific Oceans shore to shore.
“Fly, Amelia, fly,” they cried, “Into history!”
I got to meet the chief of state.
Oh wait, that wasn’t me.

"Why Not" is a deceptively simple argument about challenging authority. At first, I thought Randy and Dave were singing from the perspective of a child trying to question a parent. But "Why Not" is a more general-application, growing-up, STEM-applicable mantra. On SNORKEL!, Randy and Dave present a genteel, middle American form of children's music that would not feel out of place in the 1980s or the 1960s. SNORKEL! is a remarkably sanitized, bubble-wrapped portrait of children's music from two genial, accomplished musicians.

SNORKEL! is available on July 27 from Randy and Dave's website, Amazon, and Apple Music.
Posted by MrJeff2000 at 4:13 AM