"King of the Dance Party" Father Goose returns with his new self-proclaimed CD this week. It's a baker's dozen tracks featuring a bevy of special guests, including Dan Zanes, Josh (of the Jamtones), Aaron Nigel Smith, Danni Ai, and many more. 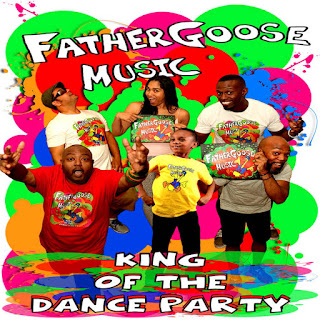 The music celebrates family, inclusion, and a multicultural world. Key tracks include the evergreen "Monkey Man," "Wanna Love U," and "Father Goose Time," the latter with Dan Zanes.

Father Goose manages to work in many styles to his musings, from sea shanties to English Music Hall, soul, North American and West Indian folk. Jamaican born Danni Ai, who toured with Shabbas Ranks and the Fugees, provides guest vocals on several songs.

You can find KING OF THE DANCE PARTY here to preview tracks or buy the CD.

The video for "Community" was created by multi-Emmy-award and winner Maciek Albrecht (also honored with a Peabody Award) and his company, MaGiKWorld Animation, in partnership with ArtsQuest. Much of the art was created during a collaborative arts project at Bethlehem, Pennsylvania's Southside Arts Festival.

Here is the video for "Community":


Mista Cookie Jar brings the West Coast to the Midwest with Minnesota's Uncle Dox, on a new summer song, "Chillin'." It's a slow groove with some acoustic guitars and beats. What else do you want on a hot day in July? Find the song here: