Fun Is the Flavor for Jelly of the Month Club

The most people I've ever seen onstage during one performance was at Kindiefest 2013, when the Dirty Sock Funtime Band (DSFB) engaged at least 15 people for "Dino-Soaring." In retrospect, that was almost a swan song for the band, who now operate sporadically (including last summer as a trio at Kidstock sans Mr. Clown). 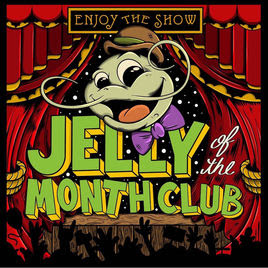 Families who loved the noisy, goofy, inside baseball nature of the DSFB will kvell and swoon for their SoCal brethren, the Jelly of the Month Club, and their second CD, ENJOY THE SHOW. The Jelly fellows divide the chaos between the four main members, Mic Dangerously, Bert Susanka, Mr. Crumb, and the deceptively-named Todd Forman.

On ENJOY THE SHOW, the band introduces outlandish characters like "Charlie the Polliwog," with a definite
Cab Calloway/Minnie the Moocher vibe, a Borscht Belt-infused "Boris the Butcher," and a "Shelfish Elf" who reports back to a lactose-intolerant Santa on your child's behavior. "Food Fight" is a delightful, messy number with overtones of Madness. Speaking of the early '80s, "Fun Facts for Kids" is rollicking rockabilly that'll teach ya something (my son also yelped "That's Mr. Sandman," making me beam with parental pride).

What outfit with members hailing from Chicago doesn't want to celebrate the World Series victory of their beloved Cubbies? "Cubs Cubs Cubs" references so many major league references that kids will be googling for hours and viewing clips – with a Harry Caray game call at the fade-out. Got a math geek in your clan? "Pi" quotes to the 26th place and then delivers a pop quiz:

Jelly of the Month Club is a high energy, high concept ensemble with members using children's music as an outlet from their day jobs in other bands - such as Sublime. ENJOY THE SHOW immediately turns any routine drive into a singalong and panel discussion. It's been four years since they raised the curtain on new material, so let's give them a hand. Put some Jelly in your rotation; it won't rot your kids' teeth or their minds.

ENJOY THE SHOW is available on Jelly of the Month's website, Soundcloud, Amazon, and Apple Music.

Here is the video for Jelly of the Month's song, "Cubs Cubs Cubs":