I had a very nice start to my secondary career reviewing kid's music. Occasionally, parents (and other people – yes, there are grown-ups without children) would say "Oh, you mean like Raffi?" So omnipresent was a figure like Raffi that even after he paused recording and releasing new material, his very name represented the entirety of "children's music." 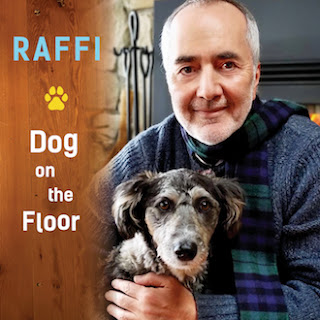 During Raffi's hiatus, others such as Dan Zanes and Laurie Berkner filled the void, as I've written before. But then an interesting thing happened. Raffi awoke, and has now released his third CD, DOG ON THE FLOOR, in a four-year span. For the first five years of reviewing, I was able to tell people "I've written about everyone under the sun – except for Raffi." Now the reverse is true. In the past five years, there are have been few performers more proficient in releasing new material than 70-year-old Raffi Cavoukian.

DOG ON THE FLOOR tranquilly expands the Raffi catalog, with three songs inspired by Luna, his recent puppy acquisition. There are also plenty of other animals, from "Mary Had A Little Lamb" to "Listen To The Horses." And both of my sons instantly identified "Here Comes the Sun" from the first guitar strum. But the central theme behind any Raffi release is the ever-present notion that every child is deserving of love, as in "Love Grows Love":

The resurgence of Raffi has been intriguing, to say the least. He certainly has more than music on his plate. Specifically, he is readying a September debut of an online version of his Child Honoring program, which envisions restructuring teaching methodologies as part of a global movement to create sustainable, peacemaking societies. His fall tour is a shoutout to #BelugaGrads – parents who grew up on his music and are now sharing it with a new generation.

On DOG ON THE FLOOR, Raffi flexes his muscle as the world's best-selling children's entertainer. With four-plus decades spent evolving from local personality to worldwide phenomenon, Raffi sounds genial and comforting on DOG ON THE FLOOR. It's hard to imagine a world of children's music without Raffi. Luckily, there's still songs to be sung and children to be honored.

DOG ON THE FLOOR is available on July 27 from Raffi's website, Amazon, and Apple Music.

Enter "Raffi videos" in a search engine and you get an amalgam of curiosities and concert recordings. Here is one of his more recent works, "Owl Singalong":