We Deserve a Justice League of Our Own

DC Comics created a slate of superheroes almost 100 years ago. Marvel Comics and their characters are half as old. Yet seniority does not equate to supremacy when it comes to the cinematic achievements of their respective rosters. 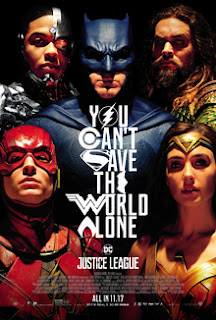 Having recently seen JUSTICE LEAGUE, I walked out with more a sense of fatigue and frustration. The movie seemed to have been built to serve many masters and wound up pleasing no one. A tease here and there (Superman racing the Flash) but mostly a series of ponderous events tenuously tied together. Set pieces and action sequences so slipshod and seemingly random that you wonder why they even bothered to put "Superman" and "Batman" into this movie.

Whereas Marvel Studios, with its grand scheme and 10-year long-term plan, does exactly the opposite. Starting with an almost marginal player in IRON MAN, they have managed to foment expectations and give people what they want, while still intoxicating even the hardest hearts of critics. Whether it's all right, like THE AVENGERS or even half-right, like THE AVENGERS 2, Marvel has employed the right people at the right time delivering the right product.

My kids sat there blankly for most of JUSTICE LEAGUE. For the first 30 minutes, it's almost comprehensible unless you are a hardcore fan. Which my seven-year-old is not. Then when the "connective tissue" of the movie starts to come together, there are still tangents – like the unnamed Russian farm family – who serve little purpose and could have been eliminated in their entirety except for needing to be saved near the conclusion.

And the characters' personalities seem to have been determined by a focus group – Cyborg is angry and confused. Aquaman is a loner. The Flash is a motor-mouth kid with a chip on his shoulder. Wonder Woman is luminous and above the fray. Batman is, well, not Christian Bale. Superman is dead and loving it. Then alive and loving it. When they come together in different iterations, there is sporadic chemistry. But lots of glowering, followed by smirks and smiles when they save the day. Suddenly everyone's friends. Including a fist-bump and two scenes setting up the sequel.

Contrast this to what felt like almost organic interactions between the Avengers and their villains – the Hulk throwing around Loki in their first meeting. Then, a few films later, Hulk throws around Thor the same way and Loki gets to laugh at the turnaround. Even if you're not a hardcore fan, and you didn't see the first film, you understand his reaction from the relationships. None of that is given enough time to breathe in JUSTICE LEAGUE – and it's still over two hours long!

Understandably, since half the team doesn't have their own tentpole movies yet, JUSTICE LEAGUE is kind of a placeholder. But Henry Cavill has already played Superman in four films. Ben Affleck walked away from directing another standalone Batman film, so he's already bored with the role (if not with the money to star in it). I wanted to like JUSTICE LEAGUE. I badly wanted to walk out and say how it took me back to how I felt when I first read these characters decades ago. Ultimately though, it remained a tease... Just as SUPERMAN VS BATMAN was a tease. Warner Brothers better get serious about straightening their House of DC film division. I'm just one fan, but we've had another teasing with these iconic characters.
Posted by MrJeff2000 at 2:01 PM