Kid hop is hot. Secret Agent 23 Skidoo is the reigning Grammy award winner for children's music with his 2016 CD, INFINITY PLUS ONE. The Alphabet Rockers seek to make the subgenre a repeat winner with their 2017 nominated CD, RISE. And Austin, Texas rapper SaulPaul is next in line (although not a nominee) with his new release, WE DREAM IN 3D. 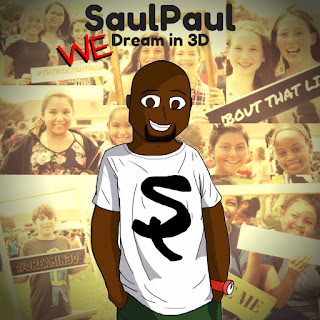 SaulPaul calls himself a musician with a message and WE DREAM IN 3D celebrates imagination (the title track), movement ("Texas Two Step" and "Do That Hula Hoop"), and family ("Mama"). The disc checks in a a crisp 27 minutes. The standout track, "Rise," features 11-year-old vocalist Alexia Finney, although closing tune "Si Se Puede (Yes We Can)" is right there with it.

There's a whole world in SaulPaul's music and a goodly portion of it is locked inside the heads of its intended listeners. If your kids have already enjoyed some kid hop or if you want a friendly "gateway" act, give 'em a little SaulPaul for the holidays.

WE DREAM IN 3D is available on Amazon and iTunes.

The pride of Long Island, Brady Rymer and the Little Band That Could, greet the first night of the festival of lights with the video to their new song, "Hanukkah Rocks." It's another lyric video, but you get to singalong, so that's a bonus. Bring the kids – it's a reading test as well!