Children's music is everywhere! It's not just a bicoastal phenomenon, with fly-over stops in Chicago and other major cities. The Salamanders, the pride of Missoula, Montana, are back with their second CD, BUBBLES, to stake their claim as the top kids act along the Clark Fork River (look it up). Is it facetious to declare that the Salamanders put Montana on the map? Well, as far as children's music is concerned, the answer is a resounding golly. As in "Golly G. Gus," a track from BUBBLES. 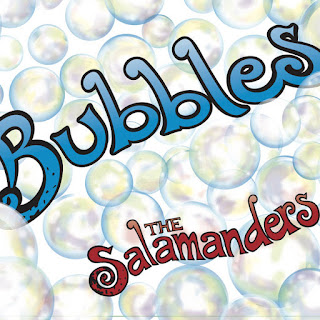 For new century children's music goes, the Salamanders are as engaging and original as any regional group. They put their own spin on a number of universal topics, such as opening track "Let's Sing a Song." But really, who else is penning tunes like "Matt Damon Magentized Me," which complains:

Head 'Mander "Cowboy" Andy Hunt clearly structured the CD to have a mix of predictability and wonder. "Pirate Santa" revisits the concept of holiday gift-giving and places it on the High Seas. The mirth of babyhood is celebrated on "Mancub." The group even has the audacity to throw in a spirited "Skeleton Rag" instrumental.

The heart of the CD is the title track, "Bubbles," with all the fun and anticipation of producing a bubble big enough to fly away over the entirety of the United States. Or at least to Pittsburgh. And in the end, everybody cleans up in time for a "Lovely Goodbye." Everybody worries about their children using video games or toy light sabres as gateways to trouble, smoking, or worse – civil disobedience. The Salamanders promote their music as a gateway to creative expression and wisdom. Perhaps they're onto something up there in Montana (It is up, isn't it)? Time to consult Google Earth...

BUBBLES is available from the Salamanders' bandcamp page, Amazon, iTunes, and CDBABY.

Here is a live performance of the album-closing tune, "Lovely Goodbye":