No Lack Of Musical Knack for Benjamin, Princess Backpack

There's a fine line between precious and precocious and Brooklyn's Benjamin Weiner (a fine name) jumps back and forth several times during his new children's music CD, PRINCESS BACKPACK AND BENJAMIN! 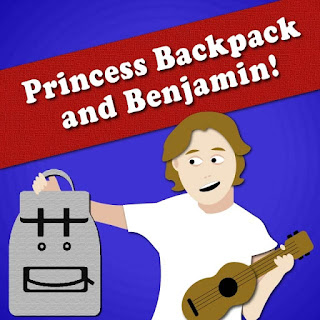 A large number of performers get into children's music after the birth of their own children. Exceptions exist, such as Raffi. There are other ways, however. And teacher/writer Weiner found mentorship from (Good Ms) Anna Padgett and Lloyd Miller. His concept is pretty simple – an ancient talking backpack (Princess Backpack) spends some time with us, rapping and listening to Benjamin sing. The backpack is from Backpackia but sounds British – with an indistinguishable accent pretty close to Weiner's actual voice (some vocal distortion might help, but might not have been practical for live shows).

Benjamin's acoustic tunes are the ones that stayed with me and felt the most genuine. Album-closer "When You Come Home" reminds the listener that "I'll be awake," no matter when the protagonist returns. "We Are Pandas" sounds like an innocent "come play with me" plea, until you realize that eating bamboo is not something that normal youngsters do – even ones with a full set of baby teeth. "Griffin as a Pet" somberly and gently informs kids that there are fantasy animals too fierce to be domesticated, even if they did exist.

Every month, 10% of album proceeds from PRINCESS BACKPACK AND BENJAMIN! go to a different children's charity. March was Free Arts NYC, providing arts programs and mentorships to kids who need them most. I'm waiting to see which charity gets the designation for April.

Weiner earnestly enters the children's music fray with a character companion (although not a full menagerie like Red Yarn. New York's kindie scene has a lengthy reputation of welcoming characters of approachable repute. Rather than badmouth Princess Backpack, I'm going to zip it. Any negative thoughts, I mean. Let's see what Weiner can pull out of this backpack and whether or not his act will indeed prove to be a charmer. At the very least, he can fill it with snacks and drinks for his young audiences.

PRINCESS BACKPACK AND BENJAMIN! is available from their website, Amazon, Bandcamp, Spotify, Google Play, and iTunes.

Here is the video for the tune, "Princess Backpack Raps":