Michael Napolitano from the Preschool of Rock is all grown up. Well, he's as grown up as any grown up doing children's music can be. Now he's taking his burgeoning Rockness Monsters out for a second spin with their upcoming CD, FUNNY FACES. In the meantime, the first single, "Elevator Song," is available for purchase. It's the equivalent of a toddler tease, in that it's mostly a novelty tune. But it gives you an idea of Michael's sensibilities and what he tries to accomplish (movement, encouragement, humor) encapsulated in, well, an Otis elevator.

You can purchase "Elevator Song" at iTunes and listen at SoundCloud.


When Charity and the Jam Band produced EARTH, their ecologically-conscious CD a few years ago, I figured that might be the tail end of the trend. In fact, it was only a resting stop. Now Wendy Morgan and Darryl Boggs (Wendy and DB to you) have released their entry, HOME/EARTH. 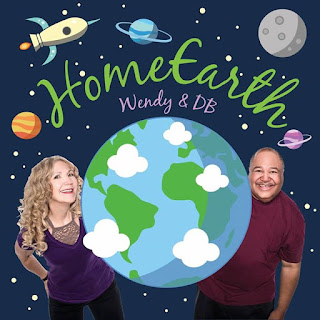 The 13 tracks include the title song, "Bugs That Give Hugs," "Plant A Seed," and other message-laden tunes for the very young. "Girl Superhero" kind of breaks away from the central theme, although not far enough that its parent couldn't scoop it up before it got too far.

The Wendy & DB Band averages about 25 years of professional experience, so they have the production chops to skillfully deliver the material. And a total of 20 percent from the proceeds of sales of HOME/EARTH will go to the Jane Goodall Foundation, VH1 Save the Music, and A Better Life for Kids.

It's hard to root against people with such good intentions, whose goal is to entertain children in the Chicago region and perhaps raise some money for charity while they "work." Wendy & DB seek to make their musical world a place that children can relax while they learn. They want everyone to feel at home since it's everybody's HOME/EARTH.